The toddler's Guide is written by Solnushka's eighteen month old daughter, who is generally accompanied on her travels by her Mama and her Big Brother, who is four and a half. She wishes everyone to know that the spelling is Mama's.

It took Mama three years to get around to taking us to the London SEALIFE Aquarium, which is odd given how fish-adoring my Incomparable Big Brother is. She says it is because the aquarium is something called ex-pen-sive. But there she was, practically about to give birth to me at any moment, feeling sorry for my Incomparable Big Brother, who was about to be thoroughly displaced a king of all he surveyed by a small smelly little sister. Mama thought. 1 So off we went. 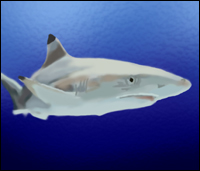 Funnily enough I do not remember much about that visit. I have been since, though, and I can tell you that the London SEALIFE Aquarium is worth every penny. Whatever they are. Particularly as, if you are not a tourist and so can visit often, the yearly membership is not as outrageous as you would expect from the one-off entrance fee. Mama says.

Mama also approves of the place because the creators of this big fishy extravaganza have been very clever. Faced with a relatively small plot of land, they have dug down and built the place on the vertical. Admitedly this means that they milk the huge shark tank and the enormous giant turtle tank for all they are worth – you go up a level, round a corner and think you are going to look at something new, but actually it's just the same old fish bowl from another angle. However, they are correct that this doesn't really matter. Me and my Incomparable Big Brother have just spent the entire evening staring gormlessly at the two goldfish Mama bought us today going round and round in only a few feet of water. We are quite capable of being entranced by the rather larger, exotic affair in the London SEALIFE Aquarium again and again and again and for even longer.

Well, my Incomparable Big Brother is. He really does like fish. And sharks. And turtles. And cats. And dogs. And mice. And snakes. And birds, and worms, and bees, and spiders, and pigs and cows and sheep and goats and zebras and tigers and elephants and… look, he pretty much likes any and all animals to a quite obsessional degree.

But calling the London SEALIFE Aquarium a two tank pony is a bit rude of Mama too, I reckon. There are plenty of other glass fish boxes with the smaller or, in the case of the piranhas, vicious exhibits in them leading up to and away from the showstoppers. Plus penguins! Penguins I tell you! And a small crocodile. And even a special tank you can lean over and stroke some rays. Or, in the case of Mama, eye up the plaice that also occupy that space speculatively. Mama enjoys cooking fish.

I like taking things apart. Papa has taped down the lid of the aquarium at home because I was looking like I would be in there disassembling the really cool bubble making machine as soon as his back was turned. Or possibly the fish. So although I really enjoyed the tanks with the brightly coloured tropical fish, and the ones with the boiling masses of small turtles banging up against the glass, and naturally I relished the opportunity to stick my hand in the water and try to grab hold of a starfish in the handling tanks, I got quite restless and started wondering where the plug was when all that is on offer is a large grey toothy predator lazing around in the middle distance.

It is for this reason that Mama recommends a sling for active toddlers. The London SEALIFE Aquarium is dark, full of twisty passages and lots of people and if you are in any doubt about your small people's ability to stick close and come when called, you really want them strapped in. Adult chest height is best, because the aquarium is one of those places which take insufficient account of the eyeline of people in pushchairs. Agist I call it, but hey, I don't like the pushchair that much so I am happy to be hauled out of it.

Of course, what I really want to do is run about, but you can't have everything. It helps a lot that the aquarium plays really soothing music… really soothing… soothing… mmmmmmmzzzzzzzzzzzzz… all the way round. Even the most energetic of small people are rendered calm by the time they leave the place, for which Mamas and Papas should be duly thankful. Except that what it is really for is inducing a hypnotic state of extreme suggestibility in the big people, so that when the family pops up into the sunlight and the shop, every time the children say 'I want…' the parents say 'how high?' Mama says. Certainly works on her. My Incomparable Big Brother and I have scored bendy sharks, a snake and a pot of miscellaneous underwater creatures on our visits. Result!

Another result is that we also generally get taken to World of Chips, or McDonald's as Mama calls it, which hardly ever happens. This is because the one major sacrifice the London SEALIFE Aquarium constructors have made to the finding the space in London problem is to not include a café. Or any other kind of food consumption area. They even discourage you from munching your sandwiches in front of the tanks. Now they will let you in and out as many times as you want, and there are plenty of food outlets nearby. But Mama recommends that you either feed up before you go in for a long afternoon, or arrive smartly after breakfast because the aquarium, while not quite suitable for a whole day's adventuring, is certainly a long half day's worth of outing, and you don't want to schlep all the way back through the winding corridors, eat, and then trudge back again only to discover that there are just two more small tanks and the shop to go. Not that that has happened to Mama ever.

But should you be wanting to make a day of it, do not fear. The London Eye, a socking great wheel carrying people up and over the Thames with excellent views of the nearby gothic splendour of something called the Houses of Parliament and beyond, is just outside. You can even get deals on tickets for both the Eye and the Aquarium. Not that we have. They are not that great deals. Mama says. But the river is right there and available to be sauntered along free of charge so generally we do. If you turn right as you go out you'll be on the run up to the South Bank Centre, which is excellent as there is a whole avenue of people in costumes standing on boxes who will dance if you throw small round bits of metal at them. And someone always does. They joys of being among tourists.

Anyway. Go to the London SEALIFE Aquarium. It's great. Just don't expect any good coffee, take lots of the folding paper Mama seems to like so much and don't let any toddlers stick their hands in with the bitey fish.

1Although now I am here I think he thinks I am more like a pet. Some kind of dog, perhaps. I certainly enjoy following him around.