NaJoPoMo was fun. One thing that made it fun was the imagination used by some of the journal writers. By popular acclaim, Paulh here shares a synopsis of his monthly serial. Z calls this 'a work of genius'. The closeness of the ideas of 'genius' and 'madness' have never been quite so clear to us.

A One-Page Version of "Perils of Paulh"

Posted Some Time Ago by paulh. My computer has been fixed. 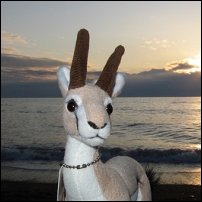 It's hard to think logically when your brain is made of polyester, but every so often Fluffy Pink Rabbit came up with an insight worthy of an Einstein. This was such a time. It was a gray Sunday afternoon in early November. Fluffy Pink Rabbit was sitting in his usual place on a futon in the tiny living room of Paulh's house.Paulh was agonizing, for the umpteenth time, over his drab, boring life that never gave him any good material for his writing.

Suddenly, Fluffy Pink Rabbit solved his problems by saying, "What you ought to do is put on that Cloak of Magic Realism that you bought at last month's yard sale. That would give you some great story material."

As soon as he fastened the Cloak around his shoulders, Paulh felt his life taking on amazing overtones. He found himself helping Little Mary Sunshine make cookies in a resort in Colorado. Then he was visiting Snow White and eating the poisoned apple that was intended for her. When he was brought back to life, Miss Piggy was kissing him. Women suddenly were eager to go out with him - an amorous female balrog in the Tolkien's Middle Earth, a fat lady in a portrait at Hogwarts, Betty Boop, even Anna Karenina.

Alas, Anna was too much to deal with, as she had a lover and a husband who challenged him to a duel. He found himself at high noon in a Western town, with spectators lining the street to get a glimpse of him with pie on his face - yes, the duel was to be a pie fight!

Then relief came from the most unlikely direction: the sky. Paulh heard a distant sound of sleigh bells which was growing louder. Santa Claus was there with his sleigh and reindeer. Soon Paulh was at the North Pole enjoying a delicious dinner with Santa and Mrs. Claus and the elves. As he ate, he was introduced to other people who had been rescued from peril by Santa. "I owe my life to Santa Claus," said the Indian man who sat to his right. "My name is Pi Patel, and my ship sank in the middle of the Pacific Ocean. I was on a lifeboat with Richard Parker for many weeks before Santa Claus saved us from death."

Pi's eyes twinkled. "Richard Parker is a Bengal tiger. You should have seen how he scratched Santa Claus while being loaded into the sleigh for return to the jungle he came from."

Santa rolled up his sleeves to show the scars. "I have been a Hindu and a Christian and a Muslim, and now I am a Santa Clausian," Pi concluded.

"Santa saved me from Gargamel," said Grandpa Smurf, a snood-wearing purple elf who sat to the left of Paulh.

"I like Noam Chomsky," said Jar Jar Binks, who sat across from Pi.

"Because he summed up all the wisdom in the universe for me when he said, 'The colorless green ideas slept furiously.'"

"Santa saved me from drowning in a teapot at the Mad Hatter's house," added a dormouse who sat near the end of the table.

Suddenly Paulh realized that the table had grown very quiet. A waiter was going around the table distributing pies. All of the guests were now holding the pies in their hands and aiming at Paulh. Fearing another pie fight, Paulh cowered under the table, until he heard Sants saying, "Everybody hold your pies up so the photographer can get a good picture of them."

Backing up, Paulh tried to get to his feet so he could be in the picture too. Unfortunately, the Cloak of Magic Realism got caught under the table leg, so it came off when he stood up. Santa Claus's dining room vanished and Paulh found himself back at his own dining table. On the table was an immense pie. Beside it was a message from Santa Claus. It read:

My cook baked this pie especially for you. Every bite will taste different in a wonderful way. Here's a photo of the dinner that you spent with us, to keep your memories alive. I wish you a Merry Christmas and a Happy New Year. All the best, Santa Claus."

Paulh looked at the photo and saw everybody he had run into during his month-long adventures. He looked over at Fluffy Pink Rabbit, who was still sitting on the futon. FPR was busy tucking into a carrot pie that Santa had brought to him. There was still one thing left to do. Paulh carefully folded the Cloak of Magic Realism and put it back in its special box. It went into a corner of his closet, so it would be ready the next time he felt like wearing it......