Loss of an Old Friend 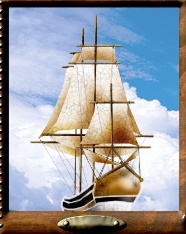 One of the most famous sea stories of all time is the Mutiny on the Bounty.

In 1960 the film company Metro Goldwyn Meyer decided to remake a film of the story. An earlier film staring Charles Laughton as Captain Bligh and Clark Gable as Fletcher Christian that had been a major hit in 1935.

The remake featured Trevor Howard as Captain Bligh, and the rebellious Marlin Brando as Mr. Christian. The biggest star would be one of the props1. A full-size replica of the ship, capable of sailing to Tahiti under her own power, including sails. Built in Lundberg, Nova Scotia, Canada, she was launched in 1961. The film was released in 1962 and the ship Bounty, spared from her intended fiery fate at the films climax, reportedly by the pleas of Marlon Brando himself. was sent on a promotional tour.

When she was booked for display in the 1964 New York World's Fair, the managers realized that while they had a fine shell of a ship, there was little to display below decks, a modern galley (kitchen) and dressing rooms were all there were to offer, but a major film company could soon change this. Set decorators were called in and soon a very authentic looking main deck was in place.

After the Fair was over, she made a tour of the East Coast promoting the film. She was finally placed in a permanent berth in the Vinoy Basin at St. Petersburg, Florida, USA.

As a young teen, I remember pestering my parents to take me on the 45 minute drive to visit her. Little then did I know then how much a part of my life she would become. After arriving at the attraction we paid our fee and entered through the turnstile. A small hut built to resemble a native hut featured a video on how she was one of the last true wooden tall ships to be built. In later years I would learned she had been built on a steel frame, but that is not important, nor the diesel engines out of sight. we passed a replica of the boat Bligh had used in his epic boat voyage before climbing the long ramp to her upper deck. After walking forward along her deck, noticing the swivel cannon ready the defend her from a native attack, we arrived at her bow and saw the long bowsprit and jib-boom extending forward – although her length on deck was only 120 feet the full length, including her rigging, was 180 feet. Climbing down the steep forward ladder we found ourselves in the galley with an open stone hearth. moving toward the rear of ship we saw the crude tables where the crew ate and how they hung their hammocks. Further aft we saw the officer's cabins, the first few were closed with only a nameplate on the door, others were open like a doll's house with cot, table and sea-chest in plain view. At the very stern of the ship was the great cabin, a large dining table, windows in galleries at the sides and a large series of windows across her stern, the fact that they looked out at a local park instead of the mountains of Tahiti could be over-looked in the bright sunlight. We passed a few more closed cabins and climbed another ladder onto the quarterdeck with the ship's wheel and main capstan (a large drum for hauling heavy items like masts and sails). The exit, as usual, was through a gift shop built in the style of a Tahitian ceremonial hall.

It was in 1979 that I purchased a small cruising sail boat and decided to live aboard her. After a few months I rented a slip in St. Petersburg's Municipal Marina, across the street from the Bounty exhibit. The price of an annual pass was not much more than two visits, so it became a regular purchase and I came to know the crew well. In 1981 I asked my wife to marry me and one of the first things we discussed was where to hold the wedding. We were unconventional enough to not want a church, her first wedding had been in a church and it hadn't ended well. We thought of parks, but the Bounty was only across the street. I said it wouldn't hurt to ask, we found out it was not that expensive to hire a tourist attraction after hours, we were wed at her capstan and are still together with fond memories.

In the mid 1980 Ted Turner, a media entrepreneur, purchased many of the assets of MGM, primarily the rights to many of the classic films, so he could colourize then, and the Bounty. As an avid sailor Turner refurbished Bounty and used her as a yacht for a few years. Eventually he donated her to the city of Fall River Massachusetts, USA. For several years the city used her as a roaming ambassador, her ownership has changed in the last few years, but she has continued to sail south from Fall River in the autumn for southern waters, often spending several months in St. Petersburg. 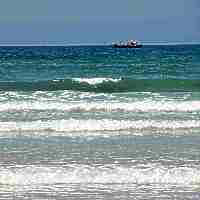 Just a few days ago, in late October 2012, The HMS Bounty once more set sail for the port of St Petersburg, FL. With the approach of Hurricane Sandy she turned far more out to sea than her normal course. At 18:30 (6:30 PM Eastern Standard time) on a distress call was received from the Bounty about 90 miles south-east of Cape Hatteras, North Carolina on 28 October. Early on Monday morning as the US Coast Guard arrived at the scene they watched the ship slip below the waves as they rescued 14 of the 16 crew members. One was recovered later. Claudene Christian, who claimed to be a descendant of Fletcher Christian, was unresponsive and declared dead when received by the hospital. The Captain, Robin Walbridge, is still missing, and the Coast Guard called off the search on 1 November 2012.

Please pray, or do what you do, for these poor souls.

On a personal note, my wife and I were planing on visiting Bounty in a few weeks, as we had just learned of her expected arrival.

1Properties of the film, a set.