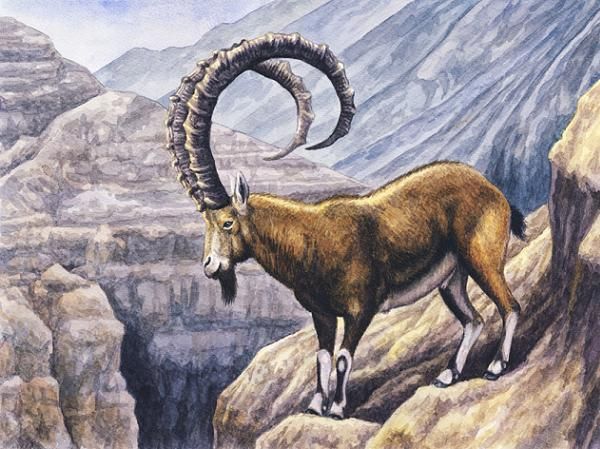 Today’s painting is of an animal that doesn’t naturally occur where I live. It is a Nubian Ibex, Capra nubiana. But I have seen these beautiful animals! There are some in the Pretoria Zoo, in a large camp that is set into the hillside along which the zoo sprawls, with quite natural-looking rocks and slopes. The Nubian Ibex does occur in Africa, in the very far northeast corner, mostly Egypt. Nubia is in fact an ancient term used for the region around the river Nile from Egypt to Sudan, and these goats live on the mountains to the east of the river. Their distribution extends into Israel, Jordan, and the Arabian Penninsula. Actually it probably originated in the middle East, from there spreading into Africa in relatively recent times. A second species, the highly endangered Walie Ibex, Capra walie, occurs in Ethiopia. It is probably descended from the Nubian Ibex, having evolved into a new species quite recently.


Ibexes are mountain goats; in fact the wild goats from which the domestic ones are descended are very similar in appearance. Adult males are magnificent, with huge, curved horns that look too heavy for their heads and necks to support. Actually these horns are not quite as heavy as they look: they are deep but narrow, much like scimitar blades. They therefore look very impressive when viewed from the side. The horns curve outward as well as backward, and actually continue growing throughout life. Very old rams may even have horns that complete more than a full turn, forming an outward spiral. The horns are used in display: the bigger a ram’s horns are, the more he will daunt lesser rams from challenging him. But they are also used in fighting, which happens when two rams are more evenly matched. Fighting ibexes will launch themselves at each other, bashing their horns together with an awesome crash. They might sometimes move closer and wrestle each other with their horns. The ridges that are spaced along the length of the horns help prevent them from slipping and sliding along each other, instead making it possible for them to ‘lock horns’ and prove their strength against each other. Whether butting horns or wrestling, each male will try and gain the higher ground so that he can have a gravitationally assisted advantage for bearing down upon his opponent. What makes these fights even more impressive is that they typically take place along precipitous cliffs, where a single misstep might mean a fall to a rocky death!


As in all wild goats, the males differ much from the females. This is called sexual dimorphism. Ibex rams are first of all much bigger: they can reach 110 cm/44” at the shoulder and a weight of 125 kg/275 lbs, while the ewes reach 100 cm/40” and 100 kg/220 lbs. But the rams have horns that are much bigger: those of the ewes rarely exceed 30 cm/12” while the horns of the rams can grow longer than a meter/yard. Furthermore, the ram grows a luxurious beard, a mane on his neck and back, and is more boldly coloured, with black markings along the front of his front and hind legs, on his forequarters, and on his mane, tail, beard and face. The ewes are usually uniformly sandy brown, blending in with their desert environs, while the males stand out much more.


In the mountains where ibexes live, they are very safe from large predators. They can climb slopes of a steepness unmatched by any other kind of large mammal. I’ve even seen photos of them climbing up almost sheer dam walls. Only leopards, and in the case of some of the central Asian ibexes, snow leopards, occur in the same rugged ranges, and if at all, only in very small numbers. Ibex rams are therefore bold and fearless, but the ewes and kids are vulnerable to large predatory birds. There are frequent stories of eagles and sometimes vultures driving them over the edge of a cliff to fall to their deaths, and then scavenging their carcasses. There isn’t much evidence for this, though. But it does happen that ibexes very occasionally slip up and fall.


They are much more at risk from human hunters. Ibexes are a feature of ancient human cave art and their skulls have often been stored as trophies. These early humans might very well have used the tactic of driving them over cliffs. When humans developed arrows and, much later, firearms, the ibexes were even more at risk. Ibex rams will often stand prominently visible on rocks and peaks, presenting a clear target. Due to hunting they had been greatly reduced in the wild in most places where they occur. A few subspecies have gone extinct, such as the Pyernean Ibex, Capra pyrenaica pyrenaica and the Portuguese Ibex, Capra pyrenaica lusitanica. Today all species are finally being protected, and prospects for them look generally good provided the protection continues.


There are currently many different populations of ibexes throughout the world, and it is sometimes confusing how to classify them all. Because wild goats inhabit inhospitable mountains, they are usually confined to small areas. Even as nimble and deft at climbing as they are, they cannot cover or defend large ranges. So, individuals and herds are usually confined to small regions. Over thousands of years ibexes have spread to various different mountain ranges in Europe, Asia and Africa, but subsequently the populations that colonized each region have remained confined there and have not mixed with other populations. This has meant that there has not been much exchange of genes. Instead, in the various different mountain regions, the ibexes have been evolving independently. This has given rise to many differences between populations, eventually causing the evolution of new subspecies or species. In the case of ibexes and other wild goats, the differences are most noticeable in the display features of the rams: the shape, size and structure of the horns, the body markings, and the beards. Even within a single species different populations in different areas may be different in these respects. This group can be considered to be still evolving, potentially still yielding new species if they should survive for long enough. 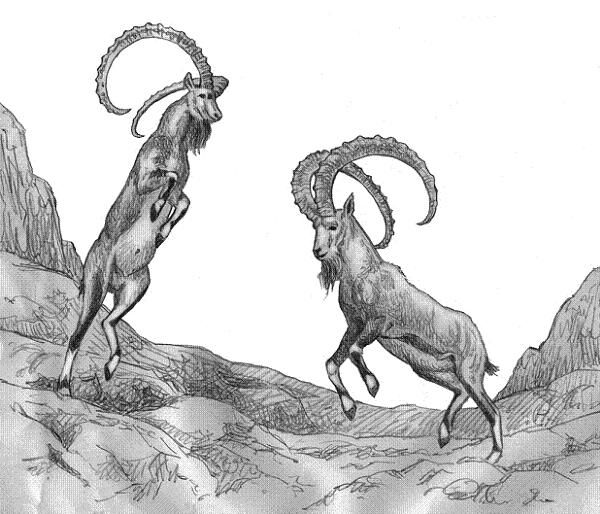 Nubian ibexes are among the hardiest of all. The desert mountains where they live experiences extremes of heat and often cold as well, while also offering only the sparsest vegetation for them to feed on. They are so successful though that there is intense competition between males for access to females. This is part of what drives their display features and evolution. The females form herds, usually with their kids and young offspring, while the males live on their own. They mark their territories with scent glands on their feet, in their groins and below their eyes, in addition to using dung and urine. When the rutting season starts, the males will come together to compete. The dominant rams will do everything in their power to prevent any other rams from getting anywhere near the ewes that are in oestrus. This is such serious business that the rams may eat very little, spending all their time fighting and chasing other rams, over the whole rutting season which lasts from September to November. This takes a toll on them. Not only do they become thin and exhausted, they may also suffer injuries during their fights. Of course the rams starting out the biggest and strongest have the best chance of lasting it out. The males who win get a chance to mate. Courting animals use a crouching display and tongue-flicking, mark each other with urine, and the ram also grunts and hisses at the female. He sometimes even kicks her. All these stimuli seem to make her more receptive and speed up the oestrus. After mating one or two kids are born. They reach sexual maturity at one year but might stay with their mother until they are three. In the wild these ibexes can live for 12 years.


Goats are members of the antelope/cattle family, the Bovidae. Like other bovids they have four-chambered stomachs and chew the cud. As a group they are closely related to sheep, and there are a number of species in the wild that are intermediate between goats and sheep. All of them constitute a sub-family, the Caprinae. The Musk-Ox is also a member of this sub-family in spite of its cow-like appearance. Caprines seem to have evolved fairly recently, probably in central Asia, the sheep/goat split happening at perhaps 6 million years ago. They have proven amazing at colonizing inhospitable regions: mountains, deserts, and the cold Arctic tundra. Of the true goats of the genus Capra, there are nine currently recognized species, five being called Ibexes (the Nubian, Walie, Alpine, Spanish and Siberian), two living in the Caucasus being called Turs, the other two being the Markhor and the Wild Goat, sometimes called Bezoar Ibex. Their ranges usually exclude each other except for some overlap between wild goats and the Turs, and Markhors with the Siberian Ibex. But in captivity they can all interbreed.