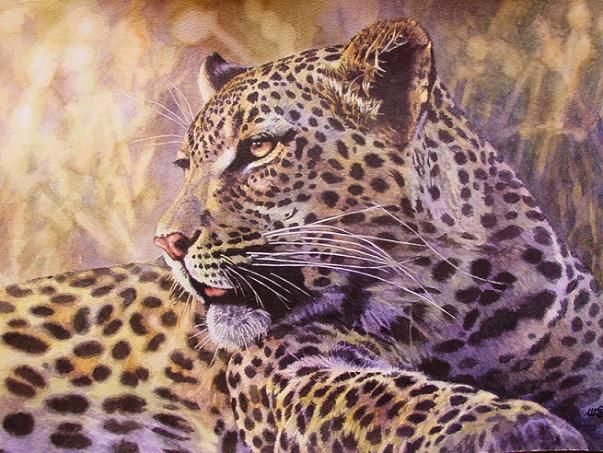 Another big cat painting this time! This is a leopard, Panthera pardus. It is one of the 'proper' big cats, of which lions, tigers and jaguars are the others. Of these it is the smallest. All of these four are distinguished from other cats by the ability to roar. The snow leopard is sometimes included, although it cannot roar. Usually it is given its own genus, Uncia.


Leopards are among the most adaptable of the big cats. Unlike lions, tigers and jaguars, they are able to survive even in areas populated with humans, provided that there remain some natural features in which they can hide, such as forests, thickets or mountains. But this species is heavily persecuted by humans and suffers from dwindling habitat and wild prey. It is currently considered to be near-threatened.


Leopards still range over most of sub-Saharan Africa and also much of Asia, as far as eastern China, in regions of forest, woodland or savannah. Seeing as it can tolerate extreme cold, it is strange that it doesn’t occur in Europe. The reason might be that Europe is too densely populated and has had efficient hunters for thousands of years. Leopard fossils have been found all over Europe from Spain to Germany and even Britain, where they lived some thousands of years ago. They have more recently been exterminated from some regions such as North Africa, the near and middle East, and far-eastern China, the Koreas and Russia.


My picture shows a typical spotted leopard. In Nature the coat pattern can vary a lot: some leopards have very fine spotting, others large blotches; some leopards are very light, and others very dark. The extreme is of course the so–called Black Panther. This is a leopard with melanism, an overabundance of dark pigment caused by a recessive gene. In good light you'll see that a black leopard is not uniformly black; it still has spots that are even blacker. Melanistic leopards can be born to normal parents. The greatest incidence of black panthers occur in the southern Malay Penninsula; there, almost all the leopards are melanistic. In Africa, black leopards are rare, but do occur in some montane forest regions.


Even rarer are leopards with aberrant patterns of spots. Sometimes these are supposed to be hybrids, such as leopard–cheetah hybrids. This is not possible, but lion–leopard hybrids have been recorded. They are very rare in nature. In captivity, leopards have hybridized with jaguars and pumas, but this cannot occur in the wild since jaguars and pumas are native to the Americas where leopards do not occur naturally. But most leopards seen with strange coat patterns in the wild are not hybrids, merely mutant variants.


There are eight to ten recognized subspecies of leopard in the world today, but these vary mostly in size and relatively minor aspects of the build and coloration.


Although considered big cats, leopards vary greatly in size. Adult female Arabian leopards can weigh as little as 44 lbs/20 kg, which is lighter than the heaviest recorded domestic cat (21.3 kg/46.8 lbs if you must know). But the largest male leopards such as those in the Kruger National Park have been recorded exceeding 200 lbs/91 kg. Leopards in Turkey and Sri Lanka can also become very big; the record is about 213 lbs/96.5 kg. This extreme size range is related to their adaptability: they grow bigger when more food is available, while smaller–bodied leopards can survive more easily in regions where the resources are sparse.


For their size leopards are extremely strong. They frequently kill prey larger than themselves, and what's more, they manage to drag these for long distances and up tall trees! This is the strategy the leopard uses to protect its kill, since as with the cheetah, it is vulnerable to its prey being stolen by lions or hyenas. Leopards have extremely strong jaws and neck muscles to enable them to do this. In fact they have great overall body strength. A leopard hunts alone, and if you consider that the largest leopard kill recorded is an adult Eland, an antelope that weighs from 1000 to 2000 lbs (450 to 900 kg), it is clear that for its size this cat is incredibly powerful.


For this reason leopards are dangerous to humans – as dangerous as lions if not more so. A number of humans have been killed by leopards, and more have been seriously injured. The attack strategy used against humans is extremely vicious: it is typically a stealth attack from behind, and the leopard will grab the person's head or neck with its jaws, latch onto the shoulders and torso with its front legs and then rake the back with the claws of the back legs. Even surviving such an attack can leave a person with gruesome injuries. The worst man–killing leopards in history have been recorded in India. The Leopard of Rudraprayag is accused of having killed over 125 people, while the Leopard of Panar is credited with over 400 victims. Both these leopards were unable to hunt normally due to injury or disease, and so went for humans. They might have been encouraged by eating human bodies that were left unburied after disease epidemics, and then when the epidemics ended, went for living humans.


But this is overall a very rare occurrence. Leopards are very versatile, and when big food is not available will settle for something smaller. Birds, rodents, even large insects such as dung beetles will stave off the hunger pangs for a while. Their most typical prey items are medium sized mammals such as monkeys and baboons (which they effectively hunt in trees) or small antelopes such as duikers and Steenboks.


Today, many people can appreciate leopards for their beauty rather than their ferocity. Glimpses of leopards actually count as the most prestigious of tourist experiences, because they are so stealthy, secretive and well-camouflaged. And yes, I have seen a few leopards in the wild myself! The ultimate experience is getting a good photograph of a leopard; they are very photogenic, especially when lazing about in a large tree in the dappled shade of the leaves.