I went to the discount store the other day. I don't mention this exciting activity because of its inherent interest, but once a year I go into that store while I'm waiting for the nice people to inspect my automobile. I always head to the remainder bin for lost books, and I usually manage to pick up something really good for a song. This year was no different: I found a nice little edition of Stephen King's novella Blockade Billy.

This novella is well-written, as always. It's about baseball, so it may not appeal to you. Elektra asked me, 'Is it about Goth sports?'

Blockade Billy is a well-written story, of course. Besides the shudder factor, the story's charm lies in its evocation (and I use that word advisedly) of a bygone era in sports, one in which baseball players were not multi-millionaires, but underpaid workers with a passion and a skill. The whole vivid tale is being told by someone who was there, a former third-base coach, now in a home for the aged. As he talks to 'Mr King', the narrator uses the, er, colourful language of old-time baseball, a mixture of technical terms and extravagant, often scatological metaphor.

I have a folkloric interest in this sort of language, and I'm always looking for historical phrasing. I only doubted Mr King's use of the salty terms once. Does that rude expression for a total disaster – the one that starts with 'cluster' – really date from as far back as 1957? Hm.

Which brings me to my topic: cussing.

Cussing is in the rhythm of our English language. This may not be true for some languages – Germans cuss little, preferring to use what foreign instructors call (lamely) 'flavouring particles'. These little, almost meaningless words, convey intensity and – well, colour   – to a statement. In English, we use cuss words for that. Even if we don't cuss.

'Why didn't you throw to third?' is a lame question.

'Why the flying tarnation didn't you throw to third, you fugitive from a haystack?' is a much more colourful, and interesting, question.

You will notice that I am circumspect here. Although our favourite maiden aunt and her earmuff-hating filter are now gone, I will observe the proprieties. I don't want to cuss in front of the impressionable or sensitive. Which is what I'm talking about, really. I come by this quality honestly: nobody where I come from ever used the real cuss words. But they needed the flavouring particles if they were to get a sentence out.

What Do You Say to a Bad Driver?

One of the complaints about World War II movies made before the 1980s is the lack of cussing. Are we seriously supposed to believe that they defeated the Axis while voicing no stronger an epithet than 'gosh darn it'? The landmark film A Bridge Too Far was praised, not only for its cinematography, but for the unforgettable moment in which Elliott Gould, watching a bridge blow up, took his cigar out of his mouth and uttered a heartfelt, genuine cussword.

My late father, a veteran of World War II, used a fearsome cussword when cut off in traffic. He called the other driver a 'peckerwood'. (A 'peckerwood' is a woodpecker up North.) This was just about as bad as it got. When he was really angry at my nonsense, he told me what I was saying was 'crap'. He didn't say that where my mother could hear it, though. A Baptist upbringing will do that to language.

True story: Once, in Athens, I told our school secretary, 'That bus driver was so polite. A taxi cut him off in traffic, and all he said was "panageia mou".' (A mild, old-lady swear.)

The secretary laughed. 'That's NOT what he said.' I eventually got the story out of her. What a difference one letter makes. I won't tell you, go ask a Greek. And this was the secretary who, when sent by her sister-in-law the school director to pick up a holiday video for the kids to watch, came back with Merry Christmas, Mr Lawrence. Fortunately, Elektra saw it first.

Different cultural groups, different standards – you don't think so, try living with ten-year-old Greek students of English who have just seen Blue Collar? (It was May Day weekend, the government was socialist, most adults turn the sound off and read the subtitles, the little beggars stay up all hours of the night. . . oh, heck, you get the picture. Just try explaining that no matter how many times those actors said it, that is not a nice word, even if it does have 'mother' in it.)

So what do you do about cussing?

The Rhythm and the Blue Words 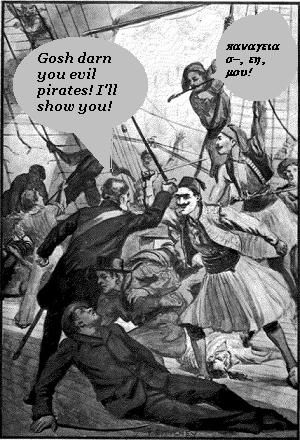 Do you remember those 19th-century adventure books you read as a kid? Stuff by Robert Louis Stevenson and Co? Do you remember dialogue that went, '"I'll have that treasure!" said he with an oath.'?

That used to puzzle the life out of me. I thought they were swearing oaths, you know, like in the Bible. 'The LORD do so to me, and more also, if I do not go and smite that darn Philistine to within an inch of his everlovin' life.' You know the verses. But no, it was just the Bowdler brigade at work, stopping people from swearing. Stevenson knew those pirates could no more get out two sentences without sneaking in a good, strong cussword than a Balkan seamstress can embroider without Lurex. So he substituted.

Stevenson must have been smarter than Robert Browning. Browning, bless his little pea-pickin', didn't know any more cuss words as an adult than I did as a child. But he was a collector of old manuscripts. Uh-oh. The result? Check out this poem, and remember: he thought the word meant 'nun's wimple'. I'm not making this up.

You see, we need the rhythm. It's flavouring particles. Without the place where those blessed cusswords go, we ain't got no flow. But it's not always convenient to go for the real thing. So improvise. Remember, Mark Twain faced this problem. And I know he knew all the cuss words. He was an old reprobate. But he wrote around them.

Here are some tips:

Explore the topic of cussing. Have fun with it. Just be careful.

Remember the Tenctonese lady in Alien Nation who objected strenuously to the Three Stooges?

'You have NO IDEA what "nyuck, nyuck, nyuck" means in my language, do you?'