As you recall, the latest Post Time Travel Challenge involves the Olympic Games. You're supposed to use your time machine to visit a past or future Olympics, and tell what you experienced. Since everybody's been too busy watching the Progress Bar shoot up to send me any copy, I thought I'd start the ball rolling with this little story.

I broke my own rules, you say?

This isn't about time travel, you say? It's about dimensional travel? And it's totally, completely, and utterly fabricated out of whole cloth? Pah!

The Games of the Goth MMMXXX Olympiad

Every four years, as measured by the boffins at the Galactic Institute for Made-up Phenomena1, there are Olympic Games on the Goth home planet, that ultra-nationalistic but totally silly place which sports a pennant instead of a flag. The Goths love sports of all kinds. Whether sports love them is a question best left to others2. Needless to say, the Olympic games on Gotha are an occasion for excitement, merriment, and the winning of cool prizes (more on that later). But first, you have to get there.

The main problem with the planet Gotha is that it exists on a separate dimensional plane from the rest of reality. (Really.) The Goths fail to see this as a problem, for two reasons: one, they believe that other worlds, and not they, are located in the aberrant reality matrix3, and two, being located in a separate dimension from their mortal enemies, the Romulans, is a very desirable thing. Be that as it may, buying a ticket to Gotha from anywhere in the known galaxy is liable to involve you in a lot of pointless epistemological discussion. As a pointless epistemological discussion with the average spaceport travel agent is prone to cause headaches, it is advised that would-be Goth Olympics attendees book passage at one of the many branches of the Gotha Tourist Board. A round-trip ticket includes a reservation for passage at the dimensional portal nearest you, transport from the Choo-Choo Station (don't ask) to your hotel, and a welcome packet including the obligatory beer and peanuts for use as recovery aids. 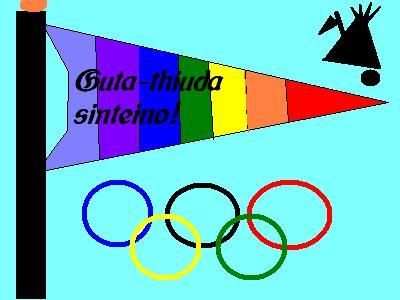 Goths are welcoming to tourists – some would say, too welcoming4 – and even allow Romulans to attend their Games, as long as they agree to be searched for weapons first. Romulans wouldn't go, of course, except for the fact that they are too competitive to stay away. They spend the intervals between Games figuring out how to circumvent the doping regulations5 and plotting successful strategies for taking home gold. This brings us to the question: How does one actually win at the Olympic games of a nation which devotes its entire collective energies to undermining the concept of competition6?

As anybody who has ever tried a pick-up game of Goth football knows, the 'Goth' part involves constantly changing the rules. For that reason, no participant in a Goth Olympic event ever knows before starting time on what basis the medals will be awarded. For example, in the last Olympics, the pole-vaulting medals were given out to the three vaulters who made the audience laugh the most. Gold went to the entrant from the Orion Belt, largely due to the mirth evoked by his efforts in getting all eight appendages over the bar. The bronze medalist, a human from New Kalamazoo, won his by breaking no fewer than 5 poles in his (largely unsuccessful) attempts to reach a middling height. The Goths were very complimentary about this stellar effort.

Indeed, the Goths are a discerning public when it comes to sports, with a keen eye for what makes an event truly spectacular. For that reason, Goth sports commentators are much in demand throughout the galaxy in 'colour' positions. The Goths themselves airily ignore the label of 'comic relief'. They aver that 'comic' is merely one letter away from 'cosmic'.

Other events at the MMMXXIX Olympics were judged in interesting ways, as well. The synchronized swimming medals went to the teams whose members managed to pick up the largest number of coins from the bottom of the pool – using toes or teeth, but not fingers – while performing their routines. Discus and hammer throwers aimed, not for the greatest distance, but for certain strategically-placed billboards featuring attractive barmaids from the Olympic Village….

The Olympic Village should be mentioned here. For each Olympic Games, the Village is redecorated by the Gotha Chamber of Commerce. The MMMXXIX theme of Red Indians caused quite a stir, particularly with the Native American Anti-defamation League. Goth representatives expended a great deal of breath expounding on the fact that the designers had got their ideas from an Earthling named Karl May. The athletes spent the time between events in wigwams, and the Opening Ceremonies included a peace dance led by Winnetou, portrayed, naturally, by a tall Goth actor who strongly resembled Rutger Hauer7. Lighting the Olympic torch with a flaming arrow was agreed to be a poetic, though kitschy, touch. No one knows what this year's theme will be: the Olympic Village has been shrouded in mystery (and a rainbow-coloured canopy) until the unveiling.

Everyone is a winner at the Goth Olympic Games. Participants are rewarded with official goody bags containing t-shirts, caps, comestibles, books, and a CD of the ten most popular anti-Romulan songs. Visitors get to enjoy day trips to the Kevlar Cookie Factory (run by the Kevlar Elves), as well as scrumptious meals in the local eateries. Planets throughout the galaxy enjoy the spectacle on Galactovision. Even the Romulans benefit – during the Olympic Truce, they are free from practical jokes perpetrated by the antagonists who otherwise play merry hell with their well-ordered lives.

The Goths are offering free balloons to the first thousand who sign up for their reasonably-priced Olympic package. Apply at your local branch of the Gotha Tourist Board, or shop online at gww.gogotha.eth.

1Time is an imaginary concept. It is also relative. The institute (check the initials, the swear filter has deprived us of this joke) has determined scientifically that how long four years is depends on: Whether you're on a planet or travelling in a spaceship, how fast the planet or spaceship is moving, and in how many directions, and whether you are in love for all or part of the time.2The rumour that an interplanetary jai alai league was disbanded for fear Goths would threaten to join is completely unfounded. It was handball.3An entire school of philosophy is devoted to the question of who is right here. It is called Ontological Justificationism. The Anglo-Saxon school of philosophy calls this 'geekolalia,' and throws other opprobrious terms in its general direction.4The unfortunate 'Kidnap a Visitor Campaign', however, has been grossly exaggerated, and was abandoned after all the lawsuits from ungrateful enforced holidaymakers.5This is difficult, as the list of prohibited substances varies from Olympiad to Olympiad. The year the Goths listed 'sauerkraut' as a controlled substance (on the grounds that it involved a 'chemical reaction') was particularly galling.6Like Quakers, Goths do not believe in 'healthy competition'. Unlike Quakers, Goths lecture their children that competition is bad for the environment, their sex life, and their skin tone.7Goths love Rutger Hauer. They have seen all his films, and have offered him honorary citizenship, which he is apparently too wise to accept. He's probably heard of the Kidnap a Visitor Campaign.