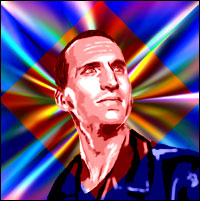 Doctor Who, the long-running cult science-fiction television programme show, returned to television in 2005 after a nine year break since 1996. On its return a new actor played the Doctor; Christopher Eccleston, commonly referred to as The Ninth Doctor as he is the Ninth actor to play the role in the television series after William Hartnell, Patrick Troughton, Jon Pertwee, Tom Baker, Peter Davison, Colin Baker, Sylvester McCoy and Paul McGann. Since Christopher Eccleston, David Tennant and Matt Smith have played the Doctor.

The BBC, having had great success with their Doctor Who books based on the initial eight Doctors decided that with the new series they would also release a new accompanying series of novels. These stories would take place between episodes of the television series. The main recurring characters are the Doctor and Rose Tyler, played by Billie Piper in the television series, with Captain Jack Harkness1, played by John Barrowman, joining for the last three novels.

The novels were all initially published as hardbacks and later republished as paperbacks. They have about 250 pages of writing inside, shorter than the previous eighth Doctor novels. The novels all have covers containing photographs of the Doctor and Rose dominating the top half of the front cover above the 'Doctor Who' logo, with a novel-specific image in the bottom half. On the spine of all the novels is a hexagonal logo based on the Gallifreyan writing that appeared in the series during the Ninth Doctor's tenure.

The first three books were all published together in May 2005. They are set between the television episodes 'World War Three' and 'Dalek'. The latter three books were published in September 2005, set between episodes 'The Doctor Dances' and 'Bad Wolf'. These would be the last Ninth Doctor novels due to Christopher Eccleston leaving the television series. The Ninth Doctor series was replaced with the publication of the similar Tenth Doctor novels, which many see them as being effectively the same range. Most of the novels contains the phrase 'Bad Wolf'; this phrase appeared in every story of Christopher Eccleston's Ninth Doctor television series apart from 'Rose', the first episode of the series.2

None of these novels feature the Doctor's original enemies such as The Master, Silurians and Sea Devils, Sontarans, Ice Warriors or Zygons or other companions such as K-9, although many of them would later return to the Doctor Who television series and book range within five years. Instead, the novels would feature new villains with the exception of The Monster Inside which features the recurring Ninth Doctor enemy, the Slitheen.

These six novels were all later published by AudioGo as audiobooks, read by members of the Doctor Who cast.

Almost every episode of Doctor Who's original run between the First and Eighth Doctors have been novelised. There are only four exceptions; Douglas Adams' 'The Pirate Planet' and 'City of Death' as well as two Eric Saward Dalek scripts; 'Resurrection of the Daleks' and 'Revelation of the Daleks'. However to date none of the Ninth Doctor's episodes have been novelised.

The Clockwise Man by Justin Richards 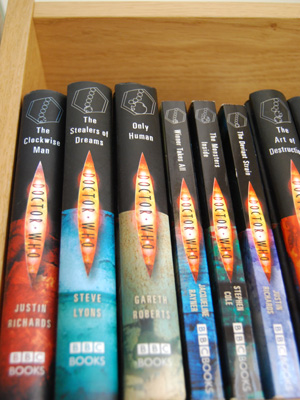 The Doctor and Rose meet members of the Russian Royal family in exile in London in 1924, including Anastasia. Separated from his sonic screwdriver and with the TARDIS taken, will the Doctor be able to prevent the destruction of London?

In this, the first Ninth Doctor novel, there are two tributes to 'An Unearthly Child', the first ever episode of Doctor Who. The TARDIS' first materialisation is into a scrap yard in London, 1924 when in the BBC Television Series, the TARDIS is first seen in a London scrap yard; Foreman's Scrapyard, 76 Totters Lane. Secondly, the Doctor says 'That's not right' when spotting a painting of the French Revolution just as Susan said 'That's not right' when reading a book on the same subject.

The story is intriguing and mysterious, a good beginning to the new series of books.

The Monsters Inside by Stephen Cole

The TARDIS lands in the Justicia system for Rose's first visit to an alien planet. However, every planet in the Justicia system is a penal colony for the criminals in the Universe. The Doctor and Rose are arrested for trespass and sentenced to different planets. Can they discover not only the truth behind the gravity experiments being conducted but also what Raxacoricofallapatorians the Blathereen family, the same species as the Slitheen family, are up to?

The 2005 series episode 'Boom Town' mentions the Doctor and Rose's trip to the Justicia system, making it the first direct reference to adventures outside the television series. In that episode, Rose says 'It's all very well going to Platform One and Justicia and the Glass Pyramid of San Kaloon, but what if we end up in Brazil?' when given her passport by Mickey Smith at the beginning of the episode.

This novel would also influence The Sarah-Jane Adventures where the Blathereen family were mentioned in 'Revenge Of The Slitheen' and appear in 'The Gift'.

Winner Takes All by Jacqueline Rayner

On the planet Toop the porcupine-like Quevvils are fighting the insect Mantodeans. In the Powell Estate they are using scratchcards to recruit soldiers for two different tasks in this war. They need foot soldiers to do the fighting and controllers to direct them. Scratchcard winners either win a game console with the game Death To The Mantodeans built in, or a holiday. Those who go on holiday never return and whenever you play 'Death To The Mantodeans' you usually have to start from scratch.

Soon Jackie Tyler has won a holiday, Mickey Smith disappears shortly after getting the high score and Rose has been turned into a living sprite in the game, with the Doctor controlling her every move…

Although the initial idea of aliens using computer-game playing humans in their wars is not new3, and the idea that people going on holiday are disappearing is also not new and was used in the Second Doctor serial The Faceless Ones. However, that the game-players are controlling real people trapped in life-or-death situations is a new twist, and the story is very effectively written.

The Deviant Strain by Justin Richards

The Doctor intercepts a distress call coming from an abandoned Soviet nuclear submarine base, where rusting, fully-armed nuclear submarines have been left to decay next to a struggling fishing village near an ancient stone circle4. Joining a Russian Special Forces investigative team they discover that something is attacking the locals and draining them of all their life-force, leaving them empty husks.

Set outside England, this wonderful adventure has an exciting backdrop and, thanks to the wonderful innovation of psychic paper, first introduced for the Ninth Doctor, Rose, Jack and the Doctor are able to get straight into the action rather than have to explain their presence.

Only Human by Gareth Roberts

In 2005 the Doctor discovers that a Neanderthal named Das has been brought forward into the 21st Century by an extremely dangerous method of time travel, any attempt to return him to the past will kill him. Leaving Jack to rehabilitate him to let him settle into a normal life in modern Britain, Rose and the Doctor travel backwards in time to discover a group of humans from the 439th Century have travelled back to 29,185BC. But what is the truth behind their mission and has the future of the human race lost its humanity and the ability to be humane? How will Rose react to being separated from the Doctor in prehistoric times while wearing a Racquel-Welch style fur bikini, being hit with the Great Fish of Matrimony and becoming Mrs Rose Glathicgacymcilliach with only her manicuring skills to fall back on?

Gareth Roberts portrays a realistic vision of the past, present and future and has created an often-inventive story largely devoted to humour, especially within domestic settings. Sometimes the humour seems at the expense of characterisation or plot and makes little sense, such as the Doctor claiming that he and another character can take off their heads, when actually swapping hats, yet the story is full of wonderful moments that more than make up for any few that fall flat.

Stealers of Dreams by Steve Lyons

Rose, Captain Jack and the Doctor land on a world without government in a society so oppressive that even the true name of the planet is classified6. The technology is stuck in the 27th Century, over 90% of the planet is jungle with only 10% dedicated to the millions of people crammed in basic, dull, multi-storey concrete flats. Imagination, fantasy and fiction are forbidden and the boundary between day-dreaming and dangerous delusion is blurred. Those who let their imagination run away with them are taken to the Big White House for treatment.

One man, named Hal Grydon, broadcasts fiction on a pirate television channel named Static, urging against the people to dream of a better world and rise up. But will the Doctor learn the truth behind the planet's hidden secret before it is too late to save Jack and Rose?

In addition to the Ninth Doctor novels, the Ninth Doctor appeared in a number of spin-off books, many of which contain facts and figures about the fictional worlds and creatures met by the Doctor. However, the Doctor Who Annual 20067 contains short stories by highly experienced Doctor Who authors, all of whom had written both novels and television episodes, including 'Doctor vs Doctor' by Gareth Roberts, who had written Only Human. The short stories in the annual are:

1The character of Captain Jack Harkness would later feature in his own spin-off television series, Torchwood.2This story featured the Autons and is frequently referred to in the ninth Doctor novels.3Other examples include the film The Last Starfighter and the novel Only You Can Save Mankind by Terry Pratchett and the previous Seventh Doctor Doctor Who novel Toy Soldiers. A similar situation involving laser combat would later be used in the The Sarah-Jane Adventures television story 'Warriors Of Kudlak'.4Reminiscent of the Fourth Doctor television adventure 'The Stones Of Blood'.5Intended to be the last story of the 1978/1980 season, half way through filming the story was abandoned due to a BBC strike. Douglas Adams later re-used the story for his novel, Dirk Gently's Holistic Detective Agency.6Arkannis Major, although rumours speculating what the planet's name is are rife, including 'Journey's End', 'Oneiros' and 'Discovery'.7Although the Tenth Doctor was first seen in the Ninth Doctor episode 'The Parting Of The Ways', broadcast on 18 June, 2005 the 2006 annual retained the Ninth Doctor throughout. Its name is inaccurate as it was published shortly before Christmas 2005.8World Science Fiction Society awards for the best science fiction short form dramatic presentation for Doctor Who episodes 'The Empty Child/The Doctor Dances' in 2006, 'The Girl In The Fireplace' in 2007, 'Blink' in 2008 and 'The Pandorica Opens/The Big Bang' in 2011.