We came, we saw, we're bonkers

It's a bit tricky trying to organise a walking adventure when the members of the team are so geographically spread out! Tullamore resident TRiG had managed to make it north of the border on a couple of occasions for some training walks, and Z being over in Scotland had done a fair bit of clambering up and down Bens. (That's Bens the mountains, not Ben his wife). But we'd never all got walking together.

Talking together had been reasonably easy using the modern technology afforded by Skype, text and email.

So it was not without some understandable anxiety that our merry band gathered together on the Friday night, managing to make it to the pre-event registration do-dah. The task was to complete a walk of 100km, aiming to do so in about 30 hours.

Saturday morning was an early start, and the mist hung low over Co Down. They say that if you can see the top of Slieve Donard (Norn Irn's highest peak), then it's going to rain. If you can't see the top, then it's raining already.

We couldn't see the top.

But there was breakfast cheer provided in the form of porridge and toast (for the walkers only, we support crew had to fend for ourselves, but then, I'm a bit of a carb-avoider so toast held little attraction for me anyway). After a brief health and safety speech, plus a reminder of why we were raising this money, the team set off through a large black arch. I put some of their 'not wanted on voyage' jetsam back in the car, and drove to the first Checkpoint. I was rather astounded to find that no sooner had I parked up in the rather muddy field than some of the walkers taking part were passing me! Then I remembered that there had been a staggered start, and some teams had set off at 7 am, while our lot were in the 8 am start group. 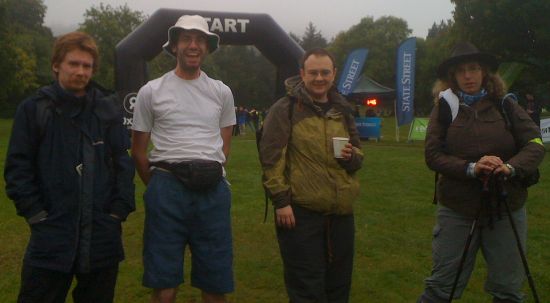 I stood with the Oxfam volunteer acting as steward, cheering and clapping as each bedraggled team made it through the drizzle to the checkpoint, each one of them finding it hilarious to say something like "Did we win?", "Not long now!", or "Is this Carlingford?"

Team 8LegsGood appeared, and had made reasonable time on the first stage. We replenished water bottles, added a few cereal bars to back-packs, ate some all important kit-kats, and they set off again in good spirits. I wasn't going to be able to meet them at Checkpoint 2, as there was no vehicle access, but we worked out what time they expected to be at Checkpoint 3, if this pace was kept up. I gave them a task to keep them amused, which was to write me a poem containing 2 legs (since this was Leg 2.) And look what they managed!

And TRiG grilling Z, the Chief Herder of Cats

This meet was in meat-space

And she didn't want to meet with the cowpats.

A hostile and harsh land

A stone wall, some sheep, and those clouds at the top

The mud wet and sucking

Poor Z got a ducking

And pulled out his foot with an audible plop.

The rivers were rushing

And pulling them off like a hoover at night.

A pause to admire a glorious view

We came and we saw and we know we're still bonkers

Twelve k in five hours, and we blame you-know-who.

While they were composing their verse, I had time to go home, report on their progress via Facebook and Twitter, make some flasks of soup and hot chocolate, and take Max to kennels in case we were out all night. I made my way to Checkpoint 3 for about 2 pm. I was expecting them around 2.30.

3 pm came and went. Many teams came down the hill, were greeted by their support crew, some of whom were superbly equipped in terms of caravans, picnic tables, gazebos etc. A local sandwich chain had provided food, and there was a table groaning with a variety of sandwiches and wraps, fruit, sticky buns, crisps and energy drinks.

4 pm came and went. The time between each team arriving grew longer, and we were into 'straggler' territory. I struck up a conversation with the Oxfam volunteer, who had the technology available to tell me how many people still had to complete this leg. 'Oh, 100 still to arrive!' she said. Then 20 minutes later, '50 still to arrive', and then, '25 still to arrive!'

5 pm came and went. I was growing anxious. The next leg involved catching a boat, and the latest we were advised to leave checkpoint 3 was 18.15. The food supplies had dwindled, and while there were still plenty left, the choice of sandwiches was reduced to tuna or egg.

At around 5.30, I spotted TRiG's white floppy hat, and the team arrived along with 2 other lost souls they had picked up en route. Mala was in a bad way, and a handsome medic rushed to her aid, providing rehydration drinks and sticking plasters. The exhausted team took the opportunity to remove boots and socks, and stock up on some sustenance (though Z, a non-egg-eating vegetarian, was poorly catered for. But we had plentiful supplies of cereal bars and chocolate).

Pushing our time limit, the team left again at 18.15, for what was a fairly short leg for them, but one which involved me driving all the way into Newry, and then all the way back out again on the far side of Carlingford Lough. That drive, along the side of Newry Canal, just as the moon was rising, was stunningly beautiful.

We had a team con-fab at Checkpoint 4. From this point on, the 100km route and the 50km route diverged, so it was decision time, if we wanted to switch to the shorter route. Donning my 'Voice of Reason' hat, I explained that there was no way we would make the 100km in the time available. The team was tired, footsore, and darkness had now fallen. Reluctantly, they agreed to make the switch, but only if we could regard this as a training event ready to do the 100 km next year!

They bravely marched on, and reached the finish just after 11 pm, in a time of 15 hours 8 minutes. Rather impressively, the first of the 100km teams arrived about 20 minutes later: Team Dromintee 4 had been runners-up the previous 2 years, and had jogged some of the route today to achieve this record breaking time. To put it in perspective, their nearest rivals arrived about 2 hours later! There was grudging admiration from Team 8LegsGood.

Here are some of their memories from the day:

I got home, and took my boots out. I realised that I wasn't carrying a "carrier bag with boots in it", so much as a "carrier bag full of ruminant shit which also happens to have some boots in the middle".

I think we made a pretty damn good stab at it, and I think we did ourselves proud. At least two of us were about to bail out within the past couple of weeks because we thought we couldn't do it, so we all did bleeping brilliantly!

Ho Yus! 8 Legs Good! Next year we'll show the Gurkas how it's done!

One abiding memory is of mud. I just did the washing, and some of it will have to go in twice. Remember to clean out the rubber seal on your washing machines, everyone, mine was filled to the rim with mud!

High points: On the side of Hen Mountain when the sun came out. There were big boulders to sit on, and now that you could actually see things, you were looking at a beautiful punchbowl-shaped valley. That bit was really nice.

Honestly though? I think my favourite bit was that wee old woman who came to her front door and started cheering us on just after we got off the boat! And the supportive tooters, too.

So, things we got out of each leg:

Having started our plans late, had trouble getting all the paper work co-ordinated and filed, it was into July before we started fundraising, and we knew that the target of £2,000 was going to be a challenge. But we ploughed ahead with car boot sales, quiz sheets, door-to-door pleading, and twisting arms of friends and family. We currently have raised well over £1,200 and still rising. The difference that this will make to the lives of people in parts of Africa is enormous, and we'd like to say a huge thank to all our supporters. Hey, you helped us make the world a better place!