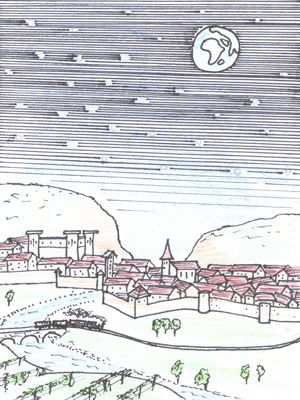 'Achtung! Ladies and gentlemen, please fasten your seatbelts. We will be landing at Neu-Tempelhof in ten minutes. The captain has turned on the 'No Smoking' sign. Please extinguish all smoking materials. The weather at Arabia Terra is clear, with a temperature of 21°. We wish you a pleasant day.'

Manfred von Bergen-Enkheim put out his cigarette, fastened his seatbelt as instructed, and surveyed the rapidly approaching Martian landscape with satisfaction. It was good to be home after his six-month tour of duty in the Asteroid Belt. Peacekeeping was a necessary task – and lately, an increasingly successful one, as his unit had only needed to bring out the sonic cannon twice to put down miners' riots. But Manfred had been homesick for most of the time. He was looking forward to catching up with affairs on his estate. It was almost harvest, and he was eager to check out the Frühlese from his vineyards. It should be a good year for Oberaar-Riesling, he believed (and hoped).

After an uneventful landing, Manfred collected his belongings, had his military passport 'stamped' (electronically but colourfully), and caught the train to his home town. The train was full, but a young man, spotting his uniform, jumped up to offer Manfred a seat. The passengers seemed relaxed and happy on this late-summer day. Manfred ordered coffee and a sandwich from the cart, and leaned back to enjoy the view of his native Aarland.

As the train rattled along beside the river, the residents chatted with newcomers, pointing out features of historical interest, and recalling old folktales about the concrete castles which stood in ruins as a reminder of early settlement, back in the 22nd Century, so long ago. Manfred was amused – he was used to what he privately called 'the tourist nonsense' – but he was good-natured enough to join in with the singing when it started.

It was late afternoon, and they had reached that popular (=ancient and hoary) folk song, We Want Our Old Kaiser Wilhelm Back, by the time the train halted at Neustadt-an-der-Aar, the chorus was resounding:

The one with the beard...with the long, long beard...

On the platform, Manfred set down his travel bag and straightened his uniform jacket. He scanned the small crowd as it passed under hanging flower baskets and into the tidy station house. He stroked his upper lip absently. He was looking forward to re-growing his moustache after space duty, facial hair being verboten in zero-g environments. A shout came from behind him.

Manfred clapped him on the back. 'Good to be home, Jürgen,' he said, and followed to the buggy that was waiting in front of the station. As the pony trotted through the Martian countryside, Manfred, normally taciturn, pelted his steward with questions about rainfall, crop yields, and animal husbandry. By the time they pulled up in the drive to the Gutshaus, Manfred had a pretty good idea of how much hay he had in the barn, how the chickens were laying, and what the vine workers had been doing. On the other hand, he had no idea how many marriages had taken place in the area, how many children had been born, or what Pastor Enfelde had said to Frau Keller at the May Fete. He did not know these things because he and Jürgen were not given to gossip. Besides, Manfred was certain that his wife would tell him all these things when she got the time.

Gisela was more than ready to tell him these things – and more – over evening bread, as they sat in the dining room of the old house. Manfred listened indulgently to his lovely wife as he buttered much-appreciated Schwarzbrot and sipped at the good local beer (fresh beer, another half-forgotten luxury). His good mood evaporated, however, when his eldest son Heinrich (who wanted to be called 'Harry') announced that he was planning to spend the rest of his university holiday sightseeing in the resort area around Hellas Planitia. Manfred gave the earnest-looking boy a sharp and disapproving glance, and shook his head.

'I forbid this,' he said firmly. 'You spend enough time being lazy when you should be studying. You will first stay and help me with the farm. Then we will see about a holiday. Something with healthy outdoor exercise, perhaps a hiking tour of the highlands. But no gadding about at seacoast resorts, chasing after vidstars. Mens sana in corpore sano.'

'Harry' gave him a stubborn look. 'Typical old-fashioned military,' he muttered, but settled down when he saw the dangerous glint in his father's eye. Although Heinrich was easily influenced by his friends at uni, he was a farmer at heart, like his father. He didn't really mind spending the best season of the year in the fields (and chasing farmgirls through the hay rather than vidstars through the bars). The smaller children were simply glad to have their father home, and begged for stories about his adventures in space. Manfred gave them carefully-edited versions. When all were safely tucked in bed (to dream of imaginary space creatures), Manfred and Gisela settled down to some serious catching up of their own. It was good to be home.

The next few weeks passed happily enough in adjustment to the rhythm of daily life on the Gut. The work went well, the weather cooperated – even Heinrich had settled down and done his share before being granted a fortnight to go hiking with his friends. (He'd emailed them a photo from the youth hostel. There was a suspiciously merry-looking little blonde next to him.) So it was a relaxed and tanned Manfred whom the messenger from the town hall found repairing a wagon. Although not pleased to be disturbed, Manfred knew that the mayor's time was valuable, and stopped only to change his boots before accompanying the man to the Rathaus. It turned out to be a plenary session of the leading landowners – and for a very good reason.

'It has been proposed that we prepare to receive new immigrants,' announced the mayor. He added solemnly, 'From Earth.' There was a buzz at this unheard-of news. Manfred voiced the general concern.

'Herr Bürgermeister, with all due respect, haven't we been through this before? Earth people do not acclimate well here. Earth people are city dwellers. This is an agricultural planet.'

The mayor blinked solemnly. 'These immigrants are agricultural people.' There was confusion at this. Another farmer put in, 'Earth people speak Chinese. Or else Spanish, or perhaps English. They will have to learn German.'

The mayor nodded. 'These immigrants speak German already.' More confusion, and another landowner spoke up.

'But according to the treaties, we do not have to accept new immigrants unless...?' Eyes widened as a thought came to the leading citizens of Arabia Terra.

The mayor confirmed their suspicions. 'Yes, it is true,' he said. 'These immigrants are claiming sanctuary from the overcrowding of Earth. They come from North America, but they are ethnic Germans.'

Volksdeutsche!' There was a general sensation at this long-ago term. Manfred shrugged. 'If they are farmers and speak our language, there should be no problem,' he said, and the others nodded agreement. 'But they must not expect the level of technology of Earth,' he added. 'We must be true to the Constitution. No climate adjustments. No genetic manipulation of crops. No...'

The Bürgermeister raised his hand to forestall the further litany of prohibitions set out by the original terraformers of Mars, the so-called Umweltschutzgesetz. 'This will not be a problem. They know this, and are prepared to abide by the law.' He looked around at the community leaders, men he knew and trusted, and smiled. 'You will like these new neighbours, I promise.'

Martian summer had become Martian fall, and harvest decorations – cornucopia baskets of bright pumpkins and maize – bedecked the station as Manfred, Gisela, and the smaller children stood on the station platform to welcome the newcomers. Gisela and the girls were in their best local Tracht, dirndls and beribboned felt hats, while Manfred and the boys wore the usual leather knee breeches, loden jackets, and peaked caps. Marike, their youngest, squealed with excitement as she spotted the train's approach around the nearest hill.

When the first arrivals from Earth stepped off the train, there was an audible sigh of satisfaction. The man who dismounted first wore plain black and blue clothing and what looked like homemade boots. Under the flat-crowned black hat, greying chin whiskers (but no moustache) were visible under keen blue eyes. The man turned to help down a woman in long cotton dress and white cap. Together, they stepped up to Manfred and Gisela and held out their hands. Charmed, the Martian couple gave them firm shakes.

'Gruess Gott,' they all said at the same time, and the farmers clapped their welcome under the Martian sun.