Cactuscafe wrote: Here's the story. I don't know what its called.


Don't leave me openings like that. I drive lorries through them. Or in this case, trains.

Infinity and the Buffet Car 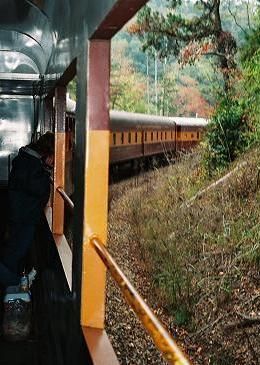 The other day, ten minutes into a train journey, I decided to write a short story. My estimated remaining journey time was three hours and forty two minutes.

'Perfect,' I thought to myself. 'An eternity, in fact.' I had more than enough time to plan and write my story, and also to buy coffee and cake from the buffet car.

I started to daydream. Fragments of the story began to appear in my head. I decided to write about a lady I once met in another daydream. She was named Cynthia. I love the name Cynthia. For some strange reason, in this story, she was a palmist. One day, whilst staring at the lines on the palm of her left hand, Cynthia would be transported to a mysterious and marvellous landscape. She would see meadows full of wild flowers and deserts of white sand. Most of the story would be descriptions of this extraordinary landscape. It would be more like a painting.

At one point I composed a sentence that made me laugh. It was something about a road that ran along the Life Line. Or maybe it was the Fate Line. Anyway, I decided that this particular detail would not make it to the page.

Despite such absurdities, things were going well.

And then, to my own surprise, I decided that Cynthia would have a very unnerving feeling that a secret was hidden somewhere in this landscape. Perhaps it was concealed in the ancient rocks. Perhaps it was buried in the white sand. I decided that she would become obsessed with this secret, and would plan a journey, in order to discover it. However, just at the point of departure, she would be shaken out of her reverie by the sound of the everyday world outside the window.

And then I realised that I had no idea how she would be able to return to this visionary world, or even what the secret was.

My story now seemed flawed and ridiculous. Instead of writing, I planned to go to the buffet car for some coffee and cake. The time ahead of me seemed like an eternity. I felt empty and dull, and a strange yearning overwhelmed me.

The train pulled into a station, and became suddenly crowded. A gentleman asked if the seat next to me was free, and settled down with sandwiches and a book.

Usually, when someone sits next to me with a book, I am seized by a terrible curiosity. I try to peer the cover, to see what they are reading. Today was no exception.

'William Blake,' said the gentleman, recognising my curiosity and showing me the hardcover volume. 'The Complete Poems. Do you know Blake?'

The atmosphere was now full of expectation. My heavy mood began to lighten. Perhaps the gentleman would tell me that the book was a gift from his wife, and I would see the words 'With all my love, Cynthia,' inscribed beautifully in black ink on the front page.

'What's your favourite poem?' I heard myself ask.

'Guess,' he said, with a curious smile.

We spoke no more. He started to read and eat his sandwiches. I began to write in my notebook.

I decided to print the Blake quote in capital letters at the top of my page. My journey had begun.

To see a world in a grain of sand,


And a heaven in a wild flower,


Hold infinity in the palm of your hand,


And eternity in an hour.   – William Blake, Auguries of Innocence