Once upon a time, on a fairly sunny day tucked right at the end of May, two Germans and two Dutchmen braved the vaguaries of road and rail to attend an informal h2g2 mini meet. 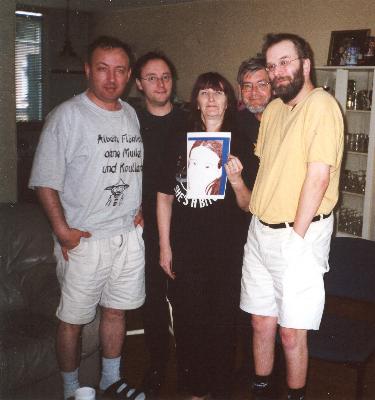 Amy Pawloski was the first to arrive - although shazz forgot to change the settings on the printer, more of which will be revealed later. She was safely propped up to look out of the window and keep watch for the first expected guest. TowelMaster had conveniently positioned himself at his parents house so, when the phone rang to report the descent of Tube onto the train platform of Alphen aan den Rijn, it only took him a few moments to drive along and collect him. They both arrived about 20 minutes later - with luggage and a put-you-up bed in tow.

Hugs were exchanged, hot drinks dispensed and the bed erected in the attic. Not long after this, Marijn actually managed to find a parking space close by and joined us all.

Hot drinks gave way to alcohol fairly soon after this and the captive audience were subjected to a showing of the Robbie Williams' Swing While Your Winning DVD. TowelMaster declined the first couple of rounds and rushed back to the station to fetch pheloxi, who arrived at 3.06 precisely. More hugs and greetings, more drinks made and a long round of chatter ensued, on just about every topic imaginable.

Curious as to whether Bossel had managed to track his way from Munich to our house using the GPS system he borrowed from a friend, shazz sent a text message. Imagine her surprise when it beeped straight back with instructions to 'open the door and let me in!'. In he staggered, carrying a crate full of Weizenbock which required careful packing into the fridge. 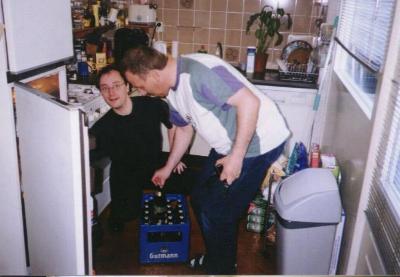 The party was complete, tinged with the sadness felt by all that Linda and Blues Shark couldn't attend due to unexpected events. A toast was drunk to them both, and to all absent friends and, of course, DNA. We decided to 'pose' with Amy, to make sure that she could see herself participating fully in proceedings. The small matter with the printer settings and the fact that shazz had used glossy paper, led to Marijn getting covered in goo blue where the outside border hadn't set - poor Amy ended up rather smudged , although still smiling. This mistake was corrected later and Amy was able to enjoy the rest of the weekend smudge-free and securely fixed.

A little while later Kheldar was summoned, giving TowelMaster the opportunity to produce his speciality - new Dutch herring served on melba toast and heaped with raw onion. Everyone seemed to enjoy this except shazz, who still can't quite find the courage to eat raw fish.

Time marched on apace and all the drinking whetted everyone's appetite again, so shazz repaired to the kitchen to cook batches of uitsmijters - the Dutch equivalent of ham and eggs on bread - ably assisted by Tube, who was a treasure and can help shazz in the kitchen any time. It was around this time that we discovered that ice-cold beer straight from the freezer doesn't really go with warmish English pint beer glasses and one reacted in a quite spectacular way. The table was, yet again, cleared of excess beer bottles and cans. 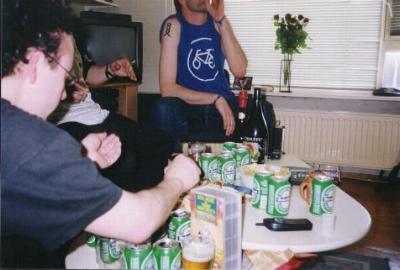 The time had come to visit the infamous Het Kasteel. Kheldar had asked Shazz to take a turn DJ'ing in the main bar, so a small selection of bizarre sounds were packed and all set off in the evening sunshine. We managed to lose TM around this time - he marched on as the advance party, probably to warn HK that we were on our way.

Boy, was the 'music' loud! There were five local bands playing that night, not all at once luckily, and they haven't yet learnt the subtlity of sound balance. Shazz's first set was completely drowned out by the next band doing their 'sound check', so she was asked to also provide what was to be the last one of the evening. TM had, by this time, sensibly decided to make his way home. The others braved the noise and drank the many rounds which mysteriously appeared on the table. We all the decided that we would do better by going home where we could hear each other speak rather than move to the small bar, where we would have probably stayed until sun-up!

Arriving home we found a sleeping TM - what a photo-opportunity that was. Most people settled for tea or coffee, chatted a little more and then headed for some rest. Luckily, the alcohol dulled the senses so everyone seemed to sleep well - although Bossel's snoring gave Tube a few problems later, and the neighbours decided to start drilling around 9am the next morning!

Saturday saw us sitting around, drinking coffee or tea and eating plenty of toast. It was quite interesting to see the preferred topping of choice, ranging from marmalade and lemon curd to chocolate spread and strawberry jam. Once more Tube showed his expertise with a butter knife and Bossel did a great washing up operation. Tube needed to catch his train around 2pm as he was off for a week's holiday in the reclaimed south west part of Holland - fairly close as the crow flies, but miles by train as rail bridges are few and far between. The rest of the afternoon was spent chatting as no-one really wanting to indulge in any strenuous exercise.

Marijn left around 6pm so he wouldn't be in trouble for late attendance at the dinner his wife was preparing and the rest of us opted for a Chinese take-away. Once more we took a leisurely stroll to Het Kasteel but, horror of horrors, it wasn't open, so we ordered a taxi to Kwatro, our second home from home. On arrival, Bossel was sad to hear that he had just missed out on trying a witte beer

which would have given him one more to add to his collection. Amy seemed to enjoy her beer, the music was good and much more conducive to conversation, and time passed quickly. By the end of the evening everyone was ready for sleep, so the prompt arrival of the taxi was welcomed.

Sunday morning and time for goodbyes. Bossel was kindly taking pheloxi to the train station on his way out of Alphen, but we couldn't let him leave until we snapped his goo blue car with the very cool registration plate. All in all another excellent meet... see you next time, hopefully in the not too distant future.