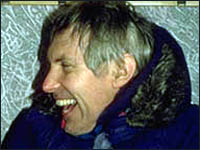 After a thrilling 30 year career in ITV became a Founder and Editor-in-Chief at h2g2 Ltd, which was formed in 1995 by a group of leading thinkers and doers from the on-line, television and literary worlds, including the late Douglas Adams, author of the Hitch Hiker's Guide to the Galaxy.

In 2001 BBC New Media bought the highly acclaimed h2g2 community website – Richard stayed on as the Executive Producer. While at the BBC Richard also presented his first ever radio series Crossing the Boundary.

However for most of his working life Richard was in ITV. Between 1991 and 1994, Richard was, at the same time, Director of Special Projects at Central Independent Television and Director of Network Factual Programmes at Meridian Broadcasting.

During his spell at Meridian Richard conceived the Ford London New York Overland Challenge and was team leader of the expedition, which set out from London on December 27th 1993 via the Siberian deep freeze, to a triumphant arrival at United Nations headquarters in New York on April 5th 1994. Click here to view the full length 'Overland To America' documentary.

Previously Richard was Central/ATV's longest serving programme controller. For 14 years he was responsible for all aspects of the company's award winning features and documentary output.

During this time Richard founded the East West Creative Association (EWCA), the first creative multi-media joint venture between the Soviet Union and the UK. Ten years on EWCA split into two companies, and Richard became a Founder Director of BUR Media Group and BFC Media which, for ten years, distributed Disney and Colombia TriStar films throughout the CIS. In April 2003 BFC Media opened the first ever IMAX theatre in Moscow, Russia. Richard is now the managing director of BFC Media.

Richard also founded the Television Trust for the Environment (TVE), which was set up n 1984 (yes we've passed our 30th birthday) by the United Nations Environment Programme (UNEP), the World Wide Fund for Nature (WWF), and Central Independent Television, where Richard then worked. In 2015 stepped down as chairman, remains actively involved as emeritus chair. Richard is a life member BAFTA. In the past Richard has been a Trustee of Wildscreen, a UK Council member of the WWF and a member of two Advisory Committees of the Arts Council.

Richard's father John Creasey, who died in 1973, was the world's most prolific writer. He published over 600 books following 743 rejection slips, with worldwide sales of over 80 million copies in at least 5000 different editions in 28 different languages. Click here for Nigel Cawthorne's biography of John Creasey The King Of Crime Writers.

In 2012 Endeavour Press published Richard's first novel Eternity's Sunrise. Richard is now a member of the Crime Writers Association (CWA), and International Thriller Writers (ITW). And Richard has just started working on an interactive memoire: See You Around The Universe (CUATU) – more about that later.

Last, but not least, his dad introduced Richard to that wide world of adventure and travel, indeed Richard and his brother Martin were driven round the world for 465 days in the back of their parents' car when Richard was 5 and 6. Richard has driven across the world three times and is now an enthusiastic amateur pilot.

See how Richard helped to build an Easy Raider microlight for a BBC adventure, which nearly but didn't get commissioned. He now has a share in a Flight Design CTSW and in 2014 enjoyed getting to grips with a de Havilland DH 82 Tiger Moth at the Boultbee Flight Academy.