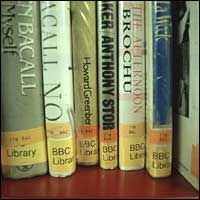 It may have escaped your attention last week, what with all the talk of election debates, alleged prime ministerial bullying and BBC belt tightening, but Thursday was World Book Day.

And a survey commissioned to mark the event revealed JK Rowling's Harry Potter series to be the book(s) most British people would like to pass on to the next generation to read.

Also among the list was such shelf-straining blockbusters as The Da Vinci Code, the Twilight books, Barack Obama's memoir1 and - deep breath – You Are What You Eat by faecally obsessed TV nutritionist 'Dr' Gillian McKeith.

So, granted, it was an odd list, but it got us thinking2. Are you a person who avoids the bestsellers lists like the plague? Do you take great pride in following your own literary path, by eschewing the big papery behemoths of the publishing world, the books everyone else seems to be reading on every bus and beach? And if so, are there any gems that you've discovered that you think deserve to be a bit better known?

Because we can't all be reading The Girl With the Dragon Tattoo3.

1Entitled Dreams From My Father2And we also know that the subject of what book you're currently reading is a long-standing topic among our Conversation Threads.3The first in a trilogy of crime novels by late Swedish author Stieg Larsson, which has latterly become the must-have accessory among UK commuters. The book was adapted into a Swedish language film in 2009 and a Hollywood remake is already on the way.4A French Hussar during the Napoleonic Wars, Etienne Gerard was the star of a series of short stories written by Sir Arthur Conan Doyle that appeared in The Strand magazine from 1894.