Yet again I signed up for both the Friday Fringe and the Saturday main meets and all were worth the trip as usual. I got two trains down to London arriving in good time to book into my hotel and get changed before the Friday Fringe. I found the pub easily as I'd been before but I was a little perturbed at standing alone for half-an-hour until I spotted Dragonqueen and I followed her to a table in the outer courtyard which was already occupied by several Researchers

. Several more arrived and the evening was the best attended 'fringe meet' I've known. I was delighted to meet some previously-unmet Researchers like Malabarista, Santragenius V and TRiG and of course renew old acquaintances. I got some wonderful gifts including a Screwfix catalogue which I'm still leafing through

. MMF surprised and delighted me by producing an old book he'd just bought which he offered to photograph for an entry I've just written and I was touched he did that, thank you dear friend

. Various messages were passed around, text messages read out, hugs and smooches passed on and the perfunctionary toast to absent friends was performed. I guess I'll be cruel and mention the cleavage-wobbling contest (which I don't remember how it all began

) for those who didn't read about it in my journal. But I certainly can't forget lil's eye-popping outfit nor the fact that she won the cleavage-wobbling contest hands down (or should that be hands up?) I'm not sorry there appears to be no photographic evidence of my ignominious defeat and shall endeavour to do better next time...

I had plans to meet up with Wilma which didn't pan out so I set off early to visit the Tower of London alone. I had wanted to see the Crown Jewels since I was a little girl and this was my first opportunity. I'd already bought my entrance ticket and was trying to find a public loo when my mobile registered a text, it was B'Elana (Bel) asking if I wanted some company on my Tower visit! Would I rather be with Bel than be alone?

I replied I was there but hadn't gone inside yet, so would wait for her, then managed to find a convenience. How did Bel arrive before me I have no idea, she must have flown on her magic carpet, then weaved her charm upon the bag-searchers at the gates, because they had already been primed about my impending arrival and made jokes about the pair of us, including displaying jealousy at the hugging and kissing going on. Honest, anyone would think we hadn't seen each other for years, not just parted company the previous night

. So I went over to kiss the loudest complainer and he was well-chuffed


The Tower is amazing, even before we got to the Crown Jewels we had a great time passing from room to room, up small, narrow flights of stairs and down again, some extremely precarious and built for midgets, watch your head, tall people! Some exhibits you were allowed to touch and even try on; although the tin hat was chained to a table both Bel and I managed to don it for 'interesting photos' which caused amusement when showing off the camera memory later in the day. The one down point for me during the visit was when we were in a room where photography wasn't allowed, and two girls in front of me were snapping away to my intense annoyance. Upon asking them to refrain one turned on me and asked if I worked there, I replied no, but I can read signs. Her pal was shushing me because she was trying to listen to the audio tour, and the sneaky snapper loudly exclaimed that everyone else was doing it – she must have thought she was in the House of Commons!

It's hard to pick out highlights when everything was awesome, but I'll try. The little chapel which was surrounded by stained glass windows. The king's 4-poster bed with three lions of England crest. The gold throne. The Tower ravens! I was surprised that it took us 3 hours to get round (and still we didn't see everything) but I could have spent another hour in the gift shop alone! Bel picked up a wonderful souvenir book of the Crown Jewels and presented it to me, which I will always treasure

. I picked out some souvenirs for my mother (which she's thrilled with, by the way), as her birthday gift to me the previous week was the admittance fee for The Tower. Then Bel took a photo of me being hugged by a Beefeater... sorry, a Yeoman of the Guard. He's smiling too, what a job, eh?

We decided to part company to return to our hotels in order to prepare for the afternoon City Walk organised by Reddyfreddy and Remarkablefirefly which Bel and I were both participating in. We knew we'd end up at the main meet afterwards so I had some gifts to collect, and managed to be at the Wellington statue at Bank with 5 minutes to spare, with Bel arriving just after. Here I met Opti for the first time, what a pleasant surprise that was! Sometimes you meet someone and they are exactly as you had imagined. Others are completely different and the reality changes your perspective somewhat.

What a fantastic walk RF and RF had planned for us, such a pity most of London was closed! But as usual it's the company we go for and the company we enjoyed, as well as the outside of buildings. We had one refreshment break and exchanged some gifts which were very much appreciated. I noticed some awesome Bird of Paradise flowers in a vase on the bar and wished Wilma (who wrote the EGE on them) was with us to admire them together. I was particularly thrilled to walk through Lincoln's Inn Fields which I'd just written about in my Ophelia entry. Much fuss was made of the elaborate drinking fountain which contained several empty beer cans, (there's a photo in one of the other albums), but littering is one of my pet hates so it didn't raise a smile from my direction and I just enjoyed looking around the area.


We all thoroughly enjoyed the City Walk which Bel elaborated on more in her Post meet report last time but I'd like to also add my thanks to Reddyfreddy and Remarkablefirefly for the organisation and interesting research. We even ended up at the Shakespeare's Head in Holborn which is where the main meet was being held, an amazing coincidence I'm sure you'll agree. What can I say about the Saturday night – as always it was brilliant to spend time with the lovely people I generally only communicate with via the Internet, email, text and phone if I'm lucky, and the best thing about being together in person are the hugs and kisses, photo opportunities and long chats. Certainly the Cilla Black reminiscence and visual re-enaction is seared on my brain, hopefully you've forgotten that part of the evening, Roymondo. Not forgotten by anyone was the recent fantastic Uni project by Bel on Traditional North German Food, especially the Lobscouse/Labskaus discussion with the people from the Liverpool area chipping in their

about the origin of the stew.

Here again I met some people I'd only conversed with online up to that point, for example minichessemouse who was a bit surprised (but pleased) to not only receive a hug from me but also a 'passed on' hug and kiss from Moonhogg in his absence. Special thanks to all the long-distance travellers, yet again lots of countries were represented. What a delightful surprise that italic Natalie turned up too! The quiz was organised by MMF (thank you

) and a grand one it was too, with 50 photos of famous people to try and identify. It's getting embarrassing to report that yet again my team, this time 'Ringer's Babes' consisting of h5ringer, Bel and myself, won the quiz!

Possibly the 'least said soonest mended' should apply to this day as I had an accident at Kings Cross station on my way for my train. I prefer to let Gnomon's enquiry as to whether I was searching for Platform 9¾ be the excuse rather than admit that I tested the bounce-ability of the platform with my face. The only good thing to say about that was the undivided attention I received from two gorgeous paramedics who tried hard to persuade me to stay a while longer in their lovely city by being their guest at one of the posh hospitals; sorry! No can do.

For once I was glad to (eventually) get home from a meet and I must apologise to all my friends for the worry my carelessness caused you. I'm well on the mend now and looking forward to the next meet with relish. 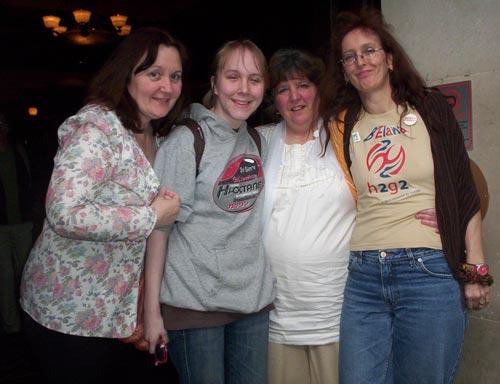