Traditional North German Food: Lobscouse - Labskaus Content from the guide to life, the universe and everything 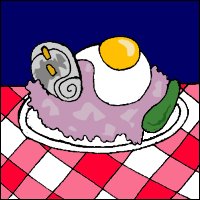 Lobscouse, or labskaus as it is known in Germany, is a stew mainly eaten in the coastal regions of Germany, Denmark and Sweden. Originally made of salted meat, potatoes, bacon and onions, there are now many variations of this simple meal, with added fish, beetroot and pickled cucumbers, and the whole thing being topped with a fried egg or two.

The origin of the name isn't clear, but there is a connection with sailors as various references prove. A 'scouse' or 'scouce' meant a stew, a 'scouser' being somebody from Liverpool 'where they eat stew'.

The origin of 'lob' is even more obscure. Possible derivations are 'loblolly', with lob being the Devonshire dialect for 'lap' or 'lop'. One possible meaning of lob is 'to bubble while boiling', with lolly being a word for a broth or a soup. The combination of both might indicate somebody eating their soup noisily, or may be an onomatopoeic reference to the bubbling stew. Alternatively, lob may refer to the action of throwing leftovers into the pot to make the stew.

In the USA, loblolly was mostly used in connection with trees that inhabit a 'low wet place', and for roughly the same reason also referred to a ship surgeon's mate or assistant1.

Labskaus got its first mention in Germany in 1701 AD, at a time when sailing vessels remained at sea for weeks, months, or even years. The crew had to take with them, and live on, provisions which lasted for a long time, such as salted meat, potatoes and onions. The Smutje (Northern German for 'mucky pup' – the ship's cook) had to provide the crew with a filling, nourishing meal from whatever provisions were left after a few weeks at sea, and so the lobscouse was born. Just how it found its way to Germany's shores is unknown, but it is still a dish you'll find on most restaurant menus in Schleswig-Holstein and its neighbouring regions. It fits perfectly into the sometimes curious and often heavy meals of the north, where sweet and sour or sweet and salty combinations are common, as are entirely 'sweet' main courses followed by a sweet dessert.

The unappetising light brown colour of the dish has made it the butt of many jokes over the years. Seamen may have remarked that they'd find everything they had lost in the previous week in their lobscouse, and others have noted that it looks the same no matter which end of the food process it is. If the beetroot is blended with the dish and not served as a side-dish, the lobscouse looks pink, which takes some getting used to. It is probably for this reason that lobscouse is nowadays served with one or two fried eggs on top - it lessens the shock for the lobscouse novice.

'Close your eyes and get done with it' is often the motto for somebody who sits in front of a portion of Labskaus for the first time. However, once you've overcome your initial disgust, you'll probably find that the taste isn't bad at all. How else would this dish still be so popular and a 'must' for tourists who spend their holidays in northern Germany? The City-Interessen-Verein (City Interests Association) of Wilhelmshaven in Lower Saxony even organises a yearly 'biggest lobscouse eating in the world' and holds the world record for the most portions of lobscouse eaten in one day. The first attempt took place in 2001 and sold 6,097, with over 50,000 visitors having attended. Over the following years, they managed to increase the number of portions sold (and eaten) to more than 10,000 – equivalent to about three tonnes of lobscouse. Although the recipes may vary depending on who cooks the lobscouse (this is a joint venture of Wilhemshaven's shop owners, hoteliers, the marine and many more), there are set rules: the portions must have the same price (€4.95) and weight (400g) each, and each portion must be dressed with a gherkin, a 'rollmops'2, a beetroot and a fried egg. People come from near and far to eat lobscouse on that day while listening to the shanty choirs at the same time.

As mentioned above, there are many variations of how to cook lobscouse, and the argument as to what does and what doesn't belong in an original lobscouse is probably as old as seafaring. What sort of pickled gherkin to use: Salz-, Gewürz- or Senfgurken (salty, spicy or with mustard seeds)? Which herring: Matjes oder Rollmops (salted herring or soured herring)? And should the herring go into the dish, or be served as an extra? The same goes for the beetroot. Salted beef or salted pork? Do you buy it minced or do you mince it later? Exactly how the lobscouse is prepared depends entirely on the area you visit. Allegedly, Mecklenburg does the lobscouse which is closest to the original, omitting the herrings, gherkins, and beetroot. Here is one way to do it:

Put the meat in a pot with 1l of water, add the bay leaf and the cloves. Peel and add the onion, add the peppercorns, then bring it all to the boil and let boil for 90 minutes. Peel and dice the potatoes, boil in a separate pot for 20 minutes. Drain the potatoes, add some stock (from the boiling meat) and make mash. When the meat is soft, drain the stock into a separate container and mince the meat with the onion. Mix it with the mashed potatoes. Add stock until you've got a compact mash. Dice the gherkin and mix with the lobscouse. Add pepper. Divide into four portions. Fry the eggs in butter and use them to top the portions of lobscouse. Add a salted herring and some beetroot slices to each portion.

As mentioned before, this recipe is quite variable. You can exchange the salted gherkins for pickled ones and the salted herring for rollmops. You can dice the herring and/or gherkins and mix with the lobscouse. You can add beetroot juice for the pink colour, or dice some beetroot slices and mix with the lobscouse. There isn't really an alternative for the vegetarians, but you could try taking tofu or soya granules (like vegetarian mince) instead of the meat. Just don't forget to add lots of salt and double the amount of spices. Omit the herring and fried egg, and you may get something similar to lobscouse.

1Yes, we mean it's a reference to a timber floor wet with blood. Did you really have to ask?2A pickled fillet of herring wrapped around a gherkin or onion. No, really.