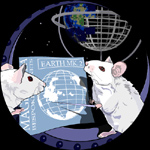 I have been waggling my mouse for years, using a simple and possibly rudimentary Paint program on an antique PC clone to create doodles that some people call cartoons. I have been appending captions or monologues to those doodles, sometimes with stunning ineffectiveness, other times with a surprising lack of comprehension on my part. According to various authorities, I have punched out hundreds of these captioned doodles, many of which have disgraced the pages of the H2G2 Post.


Why have I been singled out and honored in such a manner? I haven't. What makes me so special? Nothing. Why, then, have so many of these freakish little graphics been published? Because I'm too stupid to stop sending them in.

People, what I do is not special. In fact, in many ways, it's not even very good. But, for most of my short career as a captioned doodler on this site, I was accepted merely because I tried. Ask the Editors how many months have gone by between submissions by new cartoonists. All you have to do is try. That's it. We're not talking about a competition. There is none. We're not talking about popularity. Believe me when I tell you that there's very little of that. I can count the number of comments per year on the tongue of an ocelot.

So, why do it? All I can tell you, is, that if I weren't drawing here, I would be drawing some place else. I have thousands of desecrated pages crowding my house. When I sit down at a meeting or watch a movie, I have a piece of paper in front of me and a pen handy. I write and draw with equal in-facility. I'm not very good at either, but I keep trying, mostly because I've been doing them so long that they are as natural as farting to me... and twice as pleasant.

Drawing something silly and then appending an even sillier comment to it is a Zen exercise in filling a space. You set up your little blank space on the Paint program or what have you and you endeavor to create something which should not exist. It's that simple. It doesn't even have to be funny, as I prove dozens of times a year. It just has to be you.

I know this site is full of writers. Or people who think they are. But that is half the battle. Thinking. I know that there are graphic artists who make sure that this site has decorations everywhere. I applaud their standards and their hard work. I also think it's absolutely appalling that all those people, of each genre, would let a mangy lout like me take the ascendancy in a field that they could probably bury me in if they'd just take an effort.

I have had grown-ups and children (of all ages in both cases) tell me that they don't know how to be funny. I tell them: 'Imitation is the sincerest form of flattery'. At which point they tell me they don't own a dictionary and they don't appreciate me being uppity, and they drive away in their Cadillacs blaring T-pain through their exhaust systems.