'What you Will' (otherwise known as Twelfth Night) (Act 1, scene 1)

If music be the food of love, play on;

Give me excess of it, that, surfeiting,

The appetite may sicken, and so die.

That strain again! it had a dying fall:

O! it came o'er my ear like the sweet sound

That breathes upon a bank of violets,

So said Orlando when he was in love with being in love.

You have to wonder if he wasn't a bit commitment shy, the way he pursued an Olivia who was so vehement about having nothing to do with him1.

In Shakespeare's world they believed in music. There, Orpheus could bow mountains with his singing and cause waves to hang their heads. Judging by the number of entries created about music in its various shapes and forms, Hootoo researchers still believe in its power, but their phraseology tends to be rather different. Which is proven, briefly, by U198166 in KoRn.

Researcher U15520 believes music capable of inflicting actual bodily harm. According to Hamlet all you have to do with a wind instrument is
'Govern these ventages with your fingers and thumb,

give it breath with your mouth,

and it will discourse most eloquent music. . .'

Anyone who's heard a beginner on a recorder knows better, H, as U15520's Bagpipes, Badly Played illustrates with the eloquence H mentioned and which is not easy at all.

Not for Merchant Lorenzo, wooing his Jessica in Venice, was there the comfort of the living room sofa, a surround music system and pizza at the touch of a button. For him there was a moonlit bank to sit on and 'let the sounds of music creep in our ears:

soft stillness and the night become the touches of sweet harmony."

Perhaps that worked in Venice back then.

Today music is on tap in the living room. Music tv is one such tap, and U197861 has good advice on rules for watching music tv by.

Damp banks and soft stillness are not involved although neither, it has to be said, is a Jessica. 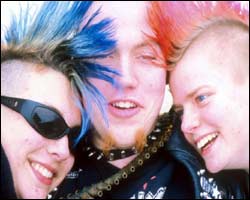 Researcher U204344 would have got on better with Much Ado's Benedick, than with either Orlando, Hamlet or Lorenzo. When Benedick expressed his preference for the soldier's drum and pipe to the soppiness of tabour and pipe, he would have dumped love-struck tabour-listening mate Claudio to join U204344 in living in the Punk movement, as retold with nostalgia in Punk, '79 onwards, given the choice. Perhaps it's as well for Beatrice that he couldn't. Then again, she might well have joined him.

Much Ado would have made a good name for a Punk band - more or less the Tudor equivalent of 'The Clash'.

Had there been one, if there was an equivalent in the music of Shakespeare's time,

it's no more likely that it would have made an appearance in his plays than that a modern Punk band would make an appearance at a Royal Variety performance.

So, maybe today's music scene isn't as different from the Tudor one as his plays and this selection of pieces from the Alternative Writing Workshop might make it appear.

Well, 'whatever', or as Shakespeare would have put it,'What you will'.

Which is where we came in. That is a wonderful name for a play and, thus, a pretty neat place to stop.

This verse of CAC Continuum was brought to you by Waz, from pieces heard in passing while mining for the UnderGuide.

And, finally, a warm thanks to those who have waited for our return and those who have helped it along. We couldn't do it without you. The Committee for Alien Content(ment) salutes you!


This boxed set of the Compleat Works of Wet Willie
produced and recorded by (tonsil revenge)!

1It was clever of Viola to get him used to her while disguised as his page. Oddly, while such gender misapprehensions might have seemed rather incredible back then, these mistakes can occur quite easily in the modern day webworld.