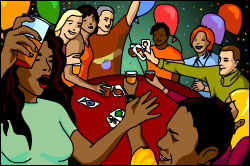 Rain used to be a tradition at h2g2 Summer meets, but now it seems it is soft rock. It would be too much of a coincidence that Bryan Adams would be returning to Hyde Park. On my arrival there the streams of people heading into the Park were a hint that something was going on. Bon Jovi were playing and to make matters worse, their box office was right next to the meeting point for h2g2ers. Pushing my way through crowds of fans, Abi found a likely
looking bunch of people and yes! There was Munchkin in a hat!

The afternoon began at the bandstand and by sending huge swathes of researchers off in groups to capture a part of the (by now, heaving) Hyde Park. Abi stayed with a few Researchers to brave the hoards of Bon Jovi fans until 3.45 pm before joining others on the south side of the Serpentine. Sporadic games of softball and croquet were punctuated by excessive amounts of lounging around and eating of the picnic organised by Z Phantom and Kaz. Kaz was also responsible for the youngest Researcher Eris, being present. Munchkin, looking resplendent in three piece suit and panama, bought class to the occasion by bringing along a mini croquet set. To prevent it from rumpling the suit he got Jamie to carry it! Master B is currently claiming that he stole a BBC Sport frisbee. This is not strictly true, Abi relieved BBC Sport of said frisbee at the New Media Family Day and gave it to Master B on Saturday.

Abi was first at the evening venue, along with Natalie, Jim the Wonder Lama and IanG, but it wasn't long before the others made their way to the Penderel's Oak. This pub has a great basement room that has plenty of room for h2g2 parties, but also the grumpiest staff in London. In fact they are so recalcitrant, they make your average Londoner look like they possess a
PhD from charm school. Once everyone had a drink of their choice, Sam led us all in the tradition toast to the memory of Douglas and absent friends.

Abi had spent a whole afternoon composing the pub quiz and growling at anyone who came near me. As none of the Editorial Team knew the questions in advance, they were invited to form a team and demonstrate if they knew the answers. Despite flicking 'v' signs at Abi through the catering hatch, they acquitted themselves pretty well coming joint third1. The winners with the highest score ever in a pub quiz were the Droolers
with Team 'We always knew Abi was a natural blonde' taking second place. Hard on their heels were Sporting Lesbian, Gnomon's Know It Alls, the Editorial Team and Abi left the relevant piece of paper in the pub! What were the other teams called again?

Late arrivals during the pub quiz were Xanatic, Zebedee and the gorgeous Fat Kelli who had left her boyfriend's sick room to join the party. After the prizes were given out, those present turned their attention to the bar and its rapidly reducing content and miserable staff. A toast was drunk to those Researchers who were absent due to being at the Glastonbury meetup and to Towelmaster who turned 42 that very day. All attempts to cheer the bar staff up failed... spectacularly. But we got our revenge in the end - closing time doesn't exist as far as h2g2 Researchers are concerned. For some, the night didn't end until the sun came up over Hyde Park.


Find out who attended this social extravaganza!

PS Mina lost her mobile phone in the Ladies loo. Did anyone find it?

Want to see some photos?