Aleister Crowley - Author and Occultist Content from the guide to life, the universe and everything 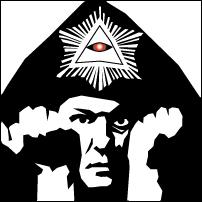 Aleister Crowley is one of the most infamous names in the history of witchcraft. A one-time member of the Golden Dawn, he went on to become known by the popular press of his time as one of the 'wickedest men alive' and 'the great beast'.

Born Edward Alexander Crowley, on 12 October, 1875, in Leamington Spa, Warwickshire, he was raised as a member of the Plymouth Brethren, a fundamentalist Christian group with whom his parents Edward and Emily Crowley were strongly associated. As a child he preached with his father, a wealthy brewer and preacher for the Brethren, but claimed to have 'gone over to Satan's side' by the age of 121. In 1895, after his father's death and his subsequent inheritance of the family fortune, Crowley enrolled at Trinity College, Cambridge, to study moral sciences and poetry. Whilst there he took an active interest in the occult and found influence in Arthur Waite's The Book of Black Magic and Pacts. He left the College in 1898 to join the Order of the Golden Dawn.

The Dawn and Beyond

Crowley became a full member of the Order after his initiation on 18 November, 1899. His time with them was short lived, however, as two years on he either left or was asked to leave the Order after a bitter dispute with its leader, SL Magregor Mathers. They quarrelled constantly and Mathers allegedly sent an astral vampire to attack Crowley, who is said to have retaliated with an army of demons!

Moving to Loch Ness, Scotland, Crowley continued his studies, learning the techniques of the Sacred Magic of Abramelin. In 1903, he married his friend's sister, Rose Kelly, and together they travelled extensively. On one of their trips to a museum in Egypt, Rose was drawn to a particular exhibit of Egyptian deities bearing the number 666. Shortly after this experience, she was allegedly possessed by a spirit that called itself Aiwass. This 'spirit' began to speak with Crowley and led him to write the Liber Legis Book of the Law, which became the basis for Crowley's later spiritual beliefs. It included Crowley's dictum 'Do what thou wilt shall be the whole of the law'.

Rose became Crowley's first high priestess and the couple had two daughters. The first, Nuit, died of typhoid before the age of two years. In 1909, Crowley divorced Rose, who was later institutionalised, with responsibility for the remaining daughter being taken on by her brother.

Search For a Scarlet Woman

Shortly before his divorce from Rose Kelly, Crowley founded the 'Order of the Silver Star', which was said to be heavily influenced by the Golden Dawn. He also founded the magazine Equinox and was eventually sued unsuccessfully by Magregor Mathers for publishing some of the Dawn's sworn secrets.

Crowley envisaged that his magical works would benefit from a female working partner, the equivalent of a high priestess, whom he dubbed a 'scarlet woman'3. Crowley's intention was to return this scarlet woman to her former glory. He also believed that when he found the right woman for the role they would be able to conceive a magical child.

In 1919, Crowley met Leah Hirsig in New York, USA. Their relationship was a passionate one and they bought a house together in Italy a year later. It was an old farmhouse, which they named 'Thelema', and was to become the centre of Crowley's new spiritual traditions.

Before being deported from Italy in 1923, Crowley was accused of many things, including animal sacrifices, sexual perversions and luring others into drug abuse.

After Italy, Crowley travelled once more, visiting France and North Africa among others.

Scarlet women came and went until, in 1929, Crowley married alleged voodoo priestess Maria Ferrari de Miramar so she could gain entry to the UK. She was eventually left destitute in the same institution as Crowley's first wife Rose Kelly, although Crowley never divorced Maria through fear that she my claim a share of his dwindling estate.

In 1934, Crowley was declared bankrupt after losing a defamation case against old friend and artist Nina Hamnett, who referred to him as a 'black magician' in her autobiography. He was also struggling to overcome a long term heroin addiction.

Crowley spent his final years in a boarding house in Hastings, UK. Whilst there he corresponded with and was visited by Dr Gerald Gardner, the founder of Gardnerian Wicca. The extent of Crowley's contribution to the Gardnerian Book of Shadows remains the subject of debate. It is widely believed, however, that what he did contribute was almost completely rewritten by Gardner's high priestess, Doreen Valiente, who found Crowley's works offensive.

Crowley died in December, 1947, from severe bronchitis and was cremated four days later. His published works include Diary of a Drug Fiend: Magick in Theory and Practice, Gems From the Equinox, The Enochian World of Aleister Crowley and The General Principles of Astrology. He also appears among the faces on the cover of the Beatles' album Sergeant Pepper's Lonely Hearts Club Band, and designed the Thoth tarot deck.

1Despite this claim, Crowley stated he was in no way a Satanist, finding Satanism too linked to Christianity.2Gnosis refers to the knowledge or understanding that underpins a belief system.3This concept probably arises from the biblical 'whore of Babylon', which is alleged to denigrate the goddess Ishtar, the Queen of Heaven.