Roseanne - Domestic Goddess, Comedienne and Actress Content from the guide to life, the universe and everything 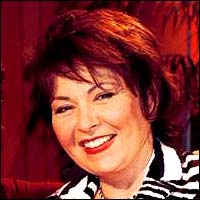 There are few television personalities as controversial and infamous as Roseanne. Her rise from housewife to television queen took in three marriages and alienation from her family.

Salt Lake City, Utah. The date was 3 November, 1952 and Roseanne Cherrie Barr was born to a family of Jewish refugees. She was a high school dropout, and at 17, she admitted herself to a mental institution suffering from nightmares after a car accident. Within a year she was out and had moved to Denver, Colorado, where she had a daughter, Brandi, who was given up for adoption. It is also reported that she traded sex for money while working as a waitress.

In 1991, she claimed that her parents had abused her both physically and sexually. Her parents denied this, and lie detectors agreed with them, leading to Roseanne falling out with her family.

Bill Pentland married Roseanne on 4 February, 1974. Together they had three children, Jennifer, Jessica and Jacob. During this time Roseanne worked as a dishwasher and a waitress at a restaurant. Her comments to the customers were so well received she was encouraged to perform stand-up comedy there. With her reputation as a comedienne rapidly growing, Roseanne was soon signed up to appear on The Tonight Show in 1985 and was then given a HBO stand up show, The Roseanne Barr Show. While this show was not a success, she had made her impact on America, coining the phrase 'Domestic Goddess' to describe a mother who combines working, raising children and running a household.

Her next vehicle was the ABC situation comedy Roseanne (1988 - 1997), where her portrayal of working class mother Roseanne Conner made her one of the most recognised faces on television. Within a season, Roseanne was riding high in the ratings, and it seemed that Roseanne herself could do little wrong. Some marketing executive (who probably wishes to remain nameless) decided that the outspoken Roseanne - with her trademark nagging and whiny voice - would be the perfect person to sing the US national anthem at a baseball game in San Diego on 25 July, 1990. Her performance, complete with crotch grabbing, caterwauling and spitting, provoked a hostile reaction from the crowd and much of the American public.

Tom Arnold was a stand-up comic who was employed as a writer for the Roseanne show. Almost as soon as the ink was dry on Roseanne's divorce, she and Arnold were married. Tom Arnold became a recurring character on the show, marking his first entrance by planting a large kiss on Roseanne, and Roseanne decided she wanted to be called Roseanne Arnold on the programme's credits.

The couple, who described themselves as 'white trash with money', shunned Hollywood by living in a mansion in the country, but Roseanne's behaviour became increasingly erratic. The tabloids cashed in on stories about the relationship, while 'Vanity Fair' published pictures of the couple mud wrestling, an image few would wish to dwell on.

It was around this time that she started accusing her parents of child abuse. The more the money came in, the more Roseanne separated from her 'TV mum' persona, with increasing rumours of backstage conflicts and tensions coming from the set.

Together, Roseanne and Tom Arnold had formed a TV production company that was responsible for a number of comedies. The Jackie Thomas Show and Tom were both comedy vehicles for Arnold, while Saturday Night Special was a sub Saturday Night Live light entertainment show.

The trailer-park's golden couple divorced in 1994, and the papers were filled with claims of how Arnold was an abusive husband. She would go on to tell interviewers that the Arnold family had tried to get her committed again and take control of the sitcom away from her.

Divorce from Arnold was well timed in showbiz terms: he vanished from the show at the end of the sixth season. Now that Roseanne was estranged from her family, she dropped her last name totally, insisting on being referred to as simply 'Roseanne'. Roseanne indulged more in the celebrity lifestyle, becoming interested in the mystic side of Judaism and also marrying her bodyguard.

Roseanne married Ben Thomas on Valentine's Day in 1995. When her sitcom came to an end in 1997, Roseanne embarked on a career in chat shows. The Roseanne Show launched in 1998. It mixed guests and comedy skits, gradually cutting the guests in favour of jokes. The show was cancelled in 2000. The wedded bliss likewise did not last, and by January 1998 she was back at the divorce courts claiming that Thomas was an abusive alcoholic who wanted to kidnap their son, Bucky. She dropped the charges, and the couple renewed their vows on the 1999 Valentine's Day edition of her talk show. Just three years later, Roseanne was a single woman again.

By now she had made contact with her daughter Brandi, and also patched up her relationship with her family a year or so later. She embarked on a life of being a single mother and grandmother; however she hadn't given up with TV. The year 2003 saw The Real Roseanne Show, a reality TV show in the mould of 'The Osbournes'. This also didn't last.

Roseanne returned to stand-up comedy in 2004, joining Michael Moore on his college tour before the Presidential Elections. This time she was playing to young educated students; making this new audience laugh renewed her love of the Stand-Up form.

The Changing Face of the Domestic Goddess

It's difficult to discuss Roseanne's life and career without mentioning cosmetic surgery. Part of the reason Roseanne was accepted into the hearts of the nation was that she looked like just any other Midwestern housewife. As the TV dollars came rolling in, Roseanne used part of it to try and remove the signs of her housewife years. She had a number of face lifts1, two breast reduction operations and numerous tummy tucks and liposuction.

During her career, Roseanne has picked up many awards, including :

Roseanne also has her own star on the Hollywood walk of fame.

1On later seasons of Roseanne the intro shows cast members' faces through the season. While the kids and the rest of the cast get older, Roseanne's face gets younger!2Originally given to the least co-operative actor or actress, from 1978, it was changed to be given to the person who most believed their own publicity.