Trailer Parks Content from the guide to life, the universe and everything 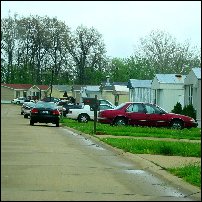 Trailer parks are ostensibly a parking place for dwellings that could be towed elsewhere, but this is misleading. Whether you call it a trailer or a mobile home, most of them can't be towed anywhere. This fact fails to disconcert the residents of such places, however, as they find many other things with which to disconcert themselves.

Trailers are rather inexpensive... actually, they're very inexpensive when compared to the average family home and the fact that they can be made of aluminium contributes to this. They range in size from a cramped unit that provides its own locomotion, to a 'double-wide', which is the peak of luxury for minimal expense. These are generally as large as a two-bedroom apartment in a large city.

Because of the expense, or because of the nature of the trailer park, the denizens are typically at the poorer end of the economic spectrum. A rather unkind slang term has evolved in the US to describe these people: 'trailer trash'.

Natural disasters have a way of hitting trailer parks with remarkable ferocity. Tornadoes seem to hop from park to park and floods offer cameramen shots of entire trailer parks sailing away.

The trailer park does get a rough ride when, in fact, it can be a positive environment in which to live. Trailer parks create a sense of community that is rarely achieved elsewhere and, if you don't like the park you're in, you can always up sticks and continue to go On the Road to the next one.