Salt Lake City, Utah, USA Content from the guide to life, the universe and everything 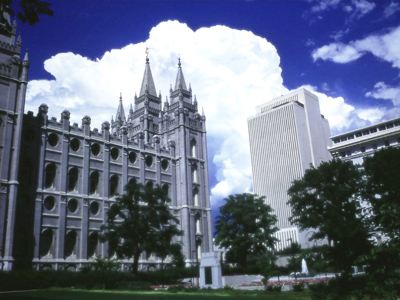 Salt Lake City is a great place to visit, but if you're not into long, hot and dusty hikes to see oddly-shaped sandstone it's best to arrive during the winter months. As if to prove this point, it was decided that the Winter Olympics will be held there in the year 2002. The snow in the area is often fantastic, rivalling Switzerland for skiing, and anywhere else in the world for snowball fights.

During the summer months, the rocks get all the attention and become increasingly beautiful in the evening. There are many parks to visit, including Zion, Bryce and Arches - appropriately named as the sandstone forms huge arches.

Whatever time of year you visit you'll be kept well fed by the plethora of fast food outlets. In fact, Kentucky Fried Chicken originated in Utah, so you can see the very first one if you can find it!

Utah is also the home of Latter Day Saints people, or Mormons, their main tabernacle being downtown Salt Lake City. One can find Mormon wards - or places of worship - in abundance, and they are easily identified by their lack of a cross and 'The Church of Jesus Christ of Latter Day Saints' banner.

For finding your way to any of the above the Utah authorities have thoughtfully provided a rather organised road naming system which mostly consists of numbers. For example, if you want a certain store that's on 2700 S and 490 W, then it's 2700 measurements south of the Latter Day Saints Temple and 490 measurements west.