The Accidental Electrocution of John Feeks: A Victim of the Current Wars Content from the guide to life, the universe and everything 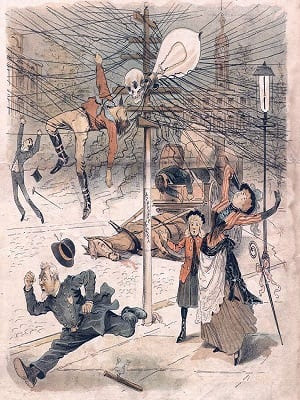 If you think that audiences in the 19th Century were lucky because they didn't have to watch television news, think again. Special editions of newspapers could be just as frenetic as the US Weather Channel's description of hurricanes. One October evening in 1889, the Evening World led with this story in its late edition – the 'Sporting Extra', no less. It caused a panic.

John Feeks, a Western Union lineman, was incinerated at 1 o'clock this afternoon on a live wire on the telegraph pole at the southwest corner of Chambers and Centre streets.
A more thrilling sight, it is safe to say, was never seen in New York.
–   Evening World (New York, NY), 11 October, 1889, Sporting Extra

This story was, unfortunately, all too true. There is some evidence that Nellie Bly, never one to stint with a descriptive phrase, had a hand in this reportage. It continued as follows:

Suddenly one of the men looked aloft and shouted: 'My God! Feeks has been electrified!'
It was too true.
The lineman was rigid. His legs were across one of the bars of the pole. One hand and arm were outstretched in the air.
The other hand clutched a wire and was burning.
Even as the gathering crowd looked on, the unfortunate fellow's mouth and nostrils belched forth white smoke.
He was literally roasting to death.
All the time his position was as natural as in life.
His wavy brown hair could be seen on his forehead...

All right, that's enough of that. What actually happened? How was it possible for a Western Union telegraph lineman to be publicly electrocuted in this way? And how did that affect the business feud of George Westinghouse and Nikola Tesla against Thomas Edison? Let's take it a step at a time.

How to Kill a Telegraph Lineman 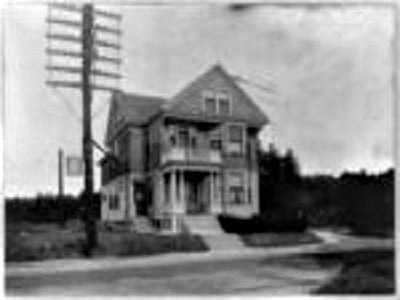 John Feeks' death was an accident, but some people were already saying that the wires above New York City were an accident waiting to happen. First of all, there were the telegraph wires. The illustration on the right shows a typical telegraph pole anywhere in the country at the time: a very tall pole with multiple crossbars bearing telegraph wires. The one John Feeks climbed for repair had fifteen crossbars. He climbed the poles wearing shoes with metal spikes attached at the instep: the spikes dug into the wood of the pole, which is why telegraph and telephone poles always had gouged holes in them.

The telegraph wires, though messy and, it could be argued, unaesthetic, were not inherently dangerous. The voltage of a telegraph wire was very low1. What John Feeks didn't know as he fell, grasped a wire with one hand and touched his chin on another while wearing metal-studded boots, was that a few blocks away, one of George Westinghouse's alternating current wires had crossed the telegraph wire and cut through its insulation.

The high-voltage current electrocuted the lineman. Passers-by looked on and screamed, unable to help. Reporters stood below and racked their brains for 'thrilling' verbs.

After the poor man's incinerated body had been taken down and the neighbours pitched in with money to help the (pregnant) widow and orphans, the citizens took decisive action. They started chopping down telegraph and electricity poles. Others demanded that the mayor finally force the power company to bury its lines underground.

The Electricity Debate, and Who Won

It wasn't as if this problem hadn't been known before the death of John Feeks. The very next day, the Evening World ran an article called 'An Alarming Record', which counted 17 injuries and two deaths in the previous two years. Serious injuries were sustained by workers, pedestrians, and even people at home. The 'at home' part disturbed everyone. Many people became convinced that electricity was too dangerous to be carried to their houses. They feared touching electric doorbells or even inserting their keys into their locks. Worried owners of buildings unilaterally cut the electric wires that ran across their roofs. Poles were torn down. Some telephone customers threw their instruments away, afraid that they were bringing deadly current into the house. Panic (and misinformation) were rife.

George Westinghouse, proponent of AC (Alternating Current), had two major headaches. One was the very reasonable public fear caused by his subsidiaries' mishandling of their wires. His other headache was a gleeful Thomas Edison. Edison had badly miscalculated by backing DC (Direct Current), which was not the wave of the future, as it could not be carried over long distances. But anything that hurt George Westinghouse was all right with Edison. Edison publicly electrocuted stray dogs to make his point.

The city of New York had already decided that overhead electrical wires were unsafe. In fact, the Edison Illuminating Co. (DC current) already buried theirs. When a bad winter storm knocked down wires everywhere, causing a widespread power outage, New Yorkers were terrified to go outdoors for fear of electrocution. Westinghouse had declared that burying the wires was too expensive and fought legislation to mandate it. Financier Jay Gould, who owned Western Union (the telegraph company), tried to argue that New York City's regulations were 'unconstitutional'. The courts sided with the city, and in spring of 1889, new mayor Hugh J Grant had already begun removing overhead wires.

The city's removal of the unsightly and dangerous telephone and telegraph poles was enormously popular with New Yorkers. They'd watch as the poles were cut down, shouting, 'Timber!' The electric companies had to fork over the money to bury the cables. Jay Gould, who was a sly businessman, sneakily had his workmen lay the telegraph cable in with the electric wires.

The city of New York became a lot safer – at least from stray electricity. It got easier to look up and see the sky, too. Except, of course, for light pollution from the now-brighter city.

And when William Kemmler, convicted murderer, died of electrocution on 6 August, 1890, those killing him did it deliberately. George Westinghouse vehemently opposed electrocution as a means of execution. He argued that it violated the Eighth Amendment to the US Constitution, which prohibits 'cruel and unusual punishment2'. The US Supreme Court (SCOTUS) decided that electrocuting criminals on purpose wasn't cruel or unusual.

Thomas Edison, while publicly denouncing execution by electrocution, secretly financed the construction of the first electric chair. He really, really hoped that Westinghouse and Tesla's AC would become associated with death. AC won out in the end, but not before creating collateral damage in the current wars. It took Kemmler eight minutes to die. His body burned in places and the stench was unbearable. Westinghouse said, 'They would have done better using an axe.'

When the Niagara Falls  power station opened in 1893, it was a triumph for George Westinghouse. Nikola Tesla's alternating current had been vindicated. AC electricity was here to stay and make life better. As long as certain safety precautions were observed. Please remember to read the warnings on your appliances.

1How low? Inquiring readers are referred to this set of instructions for telegraphers during US Civil War re-enactments.2The Eighth Amendment was put in place to end colonial practices such as branding, ducking in water, drawing and quartering, and other remnants of the English legal system.