A Folk Medicine Handbook from the Early American Republic: or, How to Be a Pow-Wow Doctor Content from the guide to life, the universe and everything 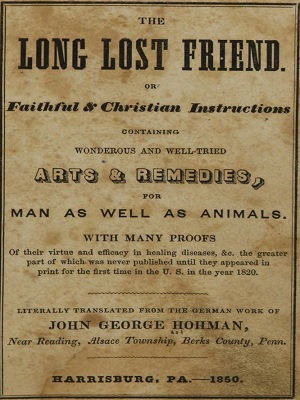 This Book is partly derived from a work published by a Gipsey, and partly from secret writings, and collected with much pain and trouble, from all parts of the world, at different periods, by the author...
– John George Hohman

What did people in the US do before health care plans? In the early American republic (1790-1830), there was no Affordable Care Act. There was also no American Medical Association. There were doctors, although their qualifications varied a fair amount. Besides, doctors cost money. People very often doctored themselves, using procedures and remedies passed down through the generations. If someone in the neighbourhood had the reputation of being a healer, they might go to them. Depending on the ethnic and cultural background of the healer, this folk medicine might involve more than a little of what is known, technically, as mumbo-jumbo1. That's where this book comes in.

In early American Pennsylvania, German-speakers were almost as common as English-speakers. So it's not surprising that a home remedy book exists, called Der Lange Verborgene Freund, oder, Getreuer und Christlicher Unterricht fur Jedermann, Enthaltend: Wunderbare und Probmässige Mittel und Künste, Sowohl fur die Menschen als Das Vieh2, and that it was first published in German, and later in English. What is really surprising is what's in it – and how popular it's proven to be, considering what's in it.

If men were not allowed to use sympathetic words, nor the name of the Most High, it would certainly not have been revealed to them; and what is more, the Lord would not help where they are made use of.
– John George Hohman 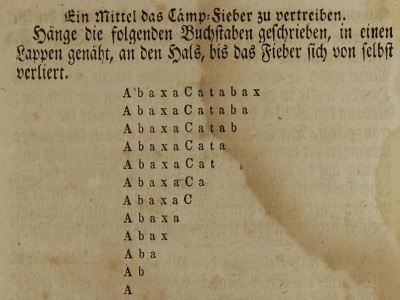 The kind of folk medicine practised by early-American Pennsylvania Germans was something they'd brought with them from the Old Country, called Braucherei, meaning, basically, 'this is how we've always done it.' Over time, Braucherei incorporated some plant knowledge gained from Native Americans, but using the word 'pow-wow doctor' to describe folk practitioners probably owes more to the widespread 19th-century belief that any medical cure was better if it came from a Native American source. That's why the tonic bottles had idealised images of chiefs or similar fanciful labels from the Kickapoo Medicine Company of New Haven, Connecticut3.

German Americans came from a variety of Christian sects, from mainstream Catholic and Protestants to Mennonites and Amish. They also came from a wide geographical area, from Alsace to Bavaria, from the Rhineland Palatinate to Moravia. However, they had many things in common, such as language and folk medicine. German folk medicine involved prayer, of course, and Bible reading. But Braucherei practitioners also used grimoires – books of magic spells handed down over time. Of course, some of these books were okay to use, while others contained 'black' magic and were dangerous. You had to know your way around these things. The best books invoked respected authorities, like Albertus Magnus, who besides being clever was a certified saint4. This is why some editions of Johann Georg Hohman's pow-wow book have Albertus Magnus in the title.

Basically, 'pow-wow' books included a little practical advice, some bits and pieces of herbal lore, and a lot of charms, magic words, and spells. Long Lost Friend consists almost exclusively of charms and varieties of sympathetic magic – rituals in which symbolic actions are used in an effort to influence action at a distance. These charms aren't only concerned with medical issues: other daily needs and concerns are addressed, such as warding off the evil eye, keeping thieves out of the house, and even winning at card games.

Here are some of the 'tested' remedies from Hohman's book: 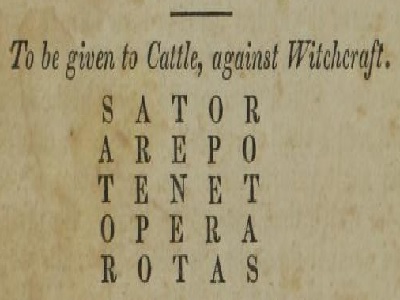 Advice you are not likely to get at the doctor's office:

Another remedy for Hysterics5, and for Colds.
This must be strictly attented [sic] to every evening, that is: whenever you pull off your shoes or stockings, run your finger in between all the toes, and smell it. This will certainly effect a cure.

A way to get the hang of Thursdays:

Good morning, dear Thursday! Take away from (name) the 77-fold fevers! Oh! thou dear Lord Jesus Christ, take them away from him!

Finally, one for the gambler in the family:

To Win every Game one engages in
Tie the heart of a bat with a red silken string to the right arm, and you will win every game at cards you play.

How Popular Was This Book?

'Dr.' Andrew C. Lenhart, whose reputation as a 'pow wow' practitioner and 'word healer' brought him almost national notoriety, died suddenly this morning...
– from an obituary in the York (PA) Dispatch, 29 July, 1934.

The German version of the Long Lost Friend was first published in 1820. The English translation came out in the 1850s (sources vary), and was reprinted several times. There was even a 'pirate' edition printed in Skippacksville, Pennsylvania, in 1837. The book's still in print: you can buy it from Amazon, with the subtitle 'a 19th-century American grimoire'.

In 1928, the Long Lost Friend was implicated in an infamous murder case in York, Pennsylvania. A man named John Blymire and some accomplices broke into the home of Nicholas Rehmeyer, a 'pow-wow' practitioner, in order to steal his copy of the Long Lost Friend. Blymire believed Rehmeyer had used the book to curse his family, and that he needed the book to break the curse. The home invaders didn't find the book, but they killed Rehmeyer and attempted to burn down the house.

'Pow-wow' doctoring and German-style folk magic are unlikely to go away any time soon. Anecdotal evidence:

Do you want to bring back Helen of Troy and conquer the world? Then go and read Goethe's Faust. But if you're worried about your chickens laying (put rabbit droppings in the feed!), then read on.

Die Land- und Haus-Apotheke is a German-language compilation of recipes, including plant dyes.

The Long Lost Friend, or, Faithful & Christian Instructions, etc, an English version, is also available to read online. Or, if you absolutely have to have your own copy for ready reference, try Amazon.

1Although Terry Pratchett might have called it 'headology'.2Translation: The Long-Lost Friend, or, True and Christian Instruction for Everyman, Containing: Wonderful and Proven Means and Arts, for Humans as Well as Animals.3The Kickapoo originated in the Great Lakes, and by the late 19th Century, lived in Kansas, Texas, and Oklahoma, as they do today. They had nothing to do with Yankee patent medicine peddlers.4Albertus Magnus (before 1200-1280), Doctor of the Church, theologian, bishop, Dominican friar, was considered the greatest thinker of his day, which means that 'you have one of the best minds of the 13th Century' is not the insult some people think it is.5Also called 'Mother-Fits' (post-partum depression?) in the book.