Doctors on the Warpath: The Pure Food and Drug Act and the AMA Content from the guide to life, the universe and everything 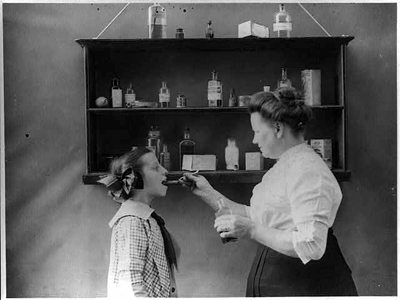 Over-the-counter medication: a good alternative to expensive prescriptions, or a recipe for health disaster? Advertising for same: informative public service or a concatenation of bare-faced lies?

Before you accuse us of practising investigative journalism without a licence, note: we're talking about the early 1900s.

1906 wasn't a good year for quacks. Once the Pure Food and Drug Act had been passed in the US, the American Medical Association went on the warpath, with enthusiasm and a dash of humour. Read on and see. But first, a few words of background.

The Pure Food and Drug Act

There are two things you need to keep in mind about medicines and doctoring: neither were regulated for a very long time. In the 19th Century, you could claim to be a doctor if you liked. You could even make up impressive titles for yourself. If you wanted, you could put some chemicals in a bottle and call it 'Doctor Fabulus' Magical Cure-All Elixir, Hair Tonic, and Manhood Restorer'. Depending on what you put in the bottle, though, it might be a good idea to keep moving. This explains the popularity of medicine wagons and fast horses.

Although Britain had been studying the dangers of patent medicines as early as the 1820s, the US hadn't, and the country soon became the dumping ground for dodgy concoctions and past-their-sell-by-date packages. In fact, the only protection US healthcare consumers had in the early days was the Patent Office, which hired Lewis Caleb Beck in 1848 to carry out chemical analyses of agricultural products. Americans were really more worried about farming, which used to be almost everyone's profession, than those pills Aunt Bessie was taking for the vapours. In 1862, the Department of Agriculture was created. It inherited the job of doing chemical analysis and making sure people weren't exporting bad farm products to neighbouring states, which was a federal offence.

Department of Agriculture chemists were enthusiastic: Harvey Washington Wiley, Chief Chemist of the Bureau of Chemistry from 1883, kept his team working hard. The Department appreciated this, although the Secretary moved them to their own building across the street after they set fire to the one he happened to be in. From there, Wiley kept up the fight to prepare the USDA for the challenges of the 20th Century – fighting those newly-discovered germs, and making food and drugs safer. They worked toward the day when they could get the Pure Food and Drug Act passed, which finally happened in 1906.

As Wiley later explained it, his new Bureau of Chemistry had zealous workers:

When this law went into effect on the first of January, 1907, the Bureau of Chemistry had already made ample preparations for its enforcement. It had conducted a long series of experiments upon healthy young men for the purpose of determining the effects of preservatives and coloring matters in foods on health and digestion.
– Harvey W Wiley, MD, History of a Crime Against the Food Law.

These young men were called the 'poison squad', and they were famous. They even had a pop song written about them:

Wiley was one of the driving forces behind the passage of the 1906 Pure Food and Drug Act. Finally, advocates of sanity, cleanliness, and sound chemistry had a law with some teeth in it. Products could not be mislabelled. All you had to do to catch these patent medicine poisoners was to do a chemical analysis on their products and catch them in a lie. The chemists had eager helpers: the doctors.

Doctors, too, were modernising. The 1890s and early 1900s, also known as the Progressive Era, was a time of professionalisation. Lawyers, doctors, dentists, social scientists, and teachers, among others, began to see their work as a profession. Colleges were established as training centres, with prescribed curricula and licencing examinations. Titles meant something, and had to be worked for. Professional organisations, such as the American Medical Association (founded in 1847), monitored standards to protect the growing reputation of the field. Peer-reviewed professional journals, such as the Journal of the American Medical Association, which began publication in 1883, served to reinforce the authority of the profession as well as to educate members. One of JAMA's tasks was to take on malpractice in the pharmaceutical industry of the day – such as it was.

Patent medicines, or over-the-counter cures, were common in the 19th and early 20th Centuries. Their advertisers used slogans, 'scientific' explanations, and testimonials from 'satisfied users' to tout preparations supposed to help consumers lose weight, gain weight, get rid of headaches, treat anxiety and 'women's problems', and stop teething babies from crying. Appliances were sold to deal with hernias, back pain, and male impotence. Some of the impotence cures used 'modern' approaches, such as electrical stimulation. Let the buyer beware.

One of the most popular baby medicines was Mrs Winslow's Soothing Syrup. Outraged medical practitioners determined that this 'nostrum', as it was called, contained 1 grain (65 mg) morphine per fluid ounce – about eight times the usual dosage for adults in a modern emergency department. Although the Soothing Syrup was implicated in a number of infant deaths, it continued to be sold until 1930.

Would You Put This on Your Head?

The medical doctors were not only concerned with oral medications. They went after cosmetics, as well – at least when the users of those cosmetics ended up in the doctor's waiting room. One correspondent to JAMA wrote this report about 'Mrs Potter's Walnut Juice Hair Stain':

This preparation is manufactured by the Mrs. Potter Hygienic Supply Company, Cincinnati, Ohio. It was analyzed by the chemists of the North Dakota Agriculture Experiment Station, who found it to consist of two liquids called No.1 and No. 2, respectively, which according to directions were to be mixed before the dye was applied to the hair. Analyses showed bottle No. 1 to contain 1.86 per cent. absolute hydrogen peroxid; bottle no 2 contained 'a strong alcoholic liquid of a light brown color containing 54.45 per cent. absolute alcohol...'...The report goes on to state that 'the active principle of the dye appears to be a phenolic compound, and conforms to the tests, etc., for paraphenylene diamin, an anilin derivative which by oxidation becomes black or brown.' The poisonous qualities of paraphenylene diamin have long been known...
– from various reports in JAMA, quoted in Nostrums and Quackery, Volume 1, American Medical Association, 1911.

The doctor who initiated the inquiry was worried because one of his patients had developed an alarming case of eczema. JAMA compiled a fairly long list of victims of this hair dye. The doctors charged the manufacturer with fraud, on the basis that there was no walnut juice in this 'Walnut Juice Hair Stain', whose label even had a picture of somebody collecting walnuts in a basket.

The company responded by changing the label to 'Walnut Tint Hair Stain'. Score one for the quacks.

AMA members went after the sellers of 'Coca-Bola', a cake of, well, coca leaves. Chewing it was supposed to make you feel better – one suspects it did. This 'pick-me-up', sold at 30 cents the box, was advertised as a tonic. According to the label:

Each ounce contains 0.71 grams of cocain. A chewing paste of leaves of the coca plant, combined with other valuable tonics.

Users were advised to consume several cakes a day, as needed, and promised that there were 'no evil after-effects'.

A small portion chewed occasionally acts as a powerful tonic to the muscular and nervous system, enabling the chewer to perform additional labor, and also relieves fatigue and exhaustion without evil after-effects. It contains no injurious ingredients and is perfectly harmless.

Needless to say, the AMA begged to differ, and warned its members. Unfortunately, in the days before strict drug enforcement, that was often all they could do, apart from catching the pushers, er, patent medicine manufacturers, in the practice of mislabeling.

Doctors could be pretty entertaining correspondents back then. A report to JAMA about Capudine demonstrates this well. Capudine was a popular headache remedy that was held responsible for killing quite a few patients around the country. It contained antipyrin, a powerful analgesic that was known to cause convulsions. JAMA even included a newspaper article from the Atlanta Constitution containing the headline 'Funeral of Mrs Winburn – Her Death Was Due to Overdose of Capudine'. The obituary was even more poignant: Mrs Winburn, a preacher's wife, left five children under the age of ten.

JAMA investigated Capudine, specifically wanting to know if there was a difference between the over-the-counter variety and the medicine they were selling in 'professional journals' (not JAMA). First, a Chicago physician wrote to the Capudine Chemical Company in Raleigh, North Carolina, asking if it made a difference whether the physician prescribed the drug, or advised his patients to buy it over the counter. The company replied with an implied 'wink-wink, nudge-nudge', that they didn't want the customer to know that the druggist filled the prescription from the same bottle as the over-the-counter, as 'many of our doctor friends prefer it that way.' The letter concluded that it was 'perfectly all right' either way. JAMA exploded:

Those were days of physician responsibility, indeed. We want this man as our doctor.

The medical writer was scathing in his exposé of the pseudo-science involved in the advertising:

The formula furnished physicians is, of course, a joke. The various ingredients given – without quantities – are, with the exceptions of Capu, well-known drugs. Capu is not so well known; in fact, its circle of acquaintances is limited to the Capudine Chemical Company. According to the company (and it if doesn't know, who does?) 'capu is a cellulin product – chemical formula C18H20N3O4.' This looks abstruse and scientific, and doubtless in many cases prevents further impertinent and awkward questions. The description only lacks one thing to prevent it qualifying for an honored position in the hall of fakes – a 'structural formula' of weird and impressive design. The great unknown – Capu – is, of course, as the analysis demonstrates, our old friend antipyrin.

The correspondent goes on to mention that the Capudine Chemical Company makes a big deal out of telling everyone that Capudine 'contains no acetanilid'. Of course not – that stuff's known to be poisonous. Also, that information distracts from the other awkward question: 'does it contain antipyrin'?

In many cases, the AMA in those early days of the fight for better drug labelling could only advise, inform, study, caution. Physicians kept sending compounds to the North Dakota lab of the Department of Agriculture. The chemists kept using their knowledge and equipment to take apart what so many quacks had put together in their labs in Cincinnati, Philadelphia, and Raleigh. Doctors read the labels carefully in order to parse the whereases and wherefores, to catch the quacks in a lie before they poisoned another young mother.

There are a lot more laws now. Some of them have real teeth in them. Obviously, pharmaceutical companies never purposely try to poison anyone. They would never cover up sloppy research or use pseudo-scientific gobbledygook just to sell unwary consumers a useless product. Of course they wouldn't. But errors do happen, and just in case, aren't we glad there's a Food and Drug Administration?

Perhaps you will think about them before you order your next shipment of Viagra online. You know, the ones that come from overseas...

1This section discusses Coca-Bola, a substance containing cocaine. It has nothing to do with Coca-Cola. While Coca-Cola contained cocaine at one time, by 1917 its objectionable ingredient, according to Dr Wiley, was caffeine.