Drugs from Plants Content from the guide to life, the universe and everything 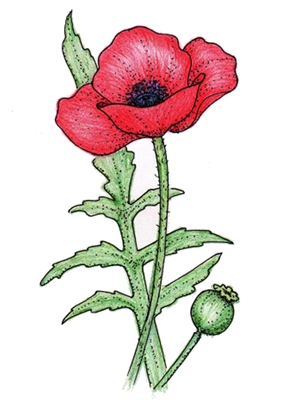 Herbal medicine has become more and more popular over the last few years, but some people do ask if it really works. Many regular drugs that we use are derived from plants - Aspirin, for example, comes from the bark of the willow tree. Many years ago, all we could do was guess which herbs might be effective, but now science can find out the active ingredients and use them to make more effective drugs.

Metabolites - the Chemicals of Metabolism

In plants, the chemical reactions that sustain life, known as 'metabolism', produce a number of different chemicals, which are called 'metabolites'. Primary metabolites are involved in the production of food, the use of energy and in growth, while secondary metabolites are those with other purposes.

Plants in difficult environmental conditions will produce a wider spectrum of secondary metabolites. For example, some plants have evolved to be poisonous to specific insects; conversely, some insects have evolved to be dependent on chemicals only produced by certain plants. Many suggestions have been made about the use of secondary metabolites; for example, it has been suggested that certain chemicals called terpenoids inhibit growth of micro-organisms, and so these properties can be used for medicinal purposes. A large proportion of existing drugs are formed from plant secondary metabolites.

Alkaloids possess a variety of structures, but all contain nitrogen, usually in a heterocyclic ring (a ring of atoms which are not all the same) and most are basic (alkaline). They tend to accumulate in the vacuoles of actively growing tissues, epidermal and hypodermal cells, vascular sheaths and latex vessels of plants. Alkaloids are formed from amino acid precursors.

In plants, alkaloids are thought to prevent infection of the plant by bacteria or fungi, but in humans alkaloids are commonly used in medicine for many different purposes. They may be used as analgesics or pain relievers such as morphine and codeine; others can be used as anaesthetics. In 1806, morphine was the first alkaloid to be identified from the opium poppy, Papaver somniferum. The use of alkaloid-containing plants as medicines, however, can be traced back to the start of civilisation.

Alkaloids are still used in modern medicine. For example, a synthetic derivative of atropine is often used to dilate the eye during eye examinations. Tropicamide can be used as an early tool for the diagnosis of Alzheimer's disease, although it is not reliable enough to be useful in routine clinical practice. Quinine, the antimalaria drug which is extracted from C officinalis, as well as the chemotherapeutic agents vincristine and vinblastine, which are isolated from Catharanthus roseus, are all still used in modern medicine1.

Several alkaloids extracted from the roots of Rauwolfia serpentina have been shown to lower high blood pressure. However, the most active of these alkaloids is reserpine which has an unfortunate side effect. A year after it was introduced as a drug, a few patients developed the symptoms of Parkinson's disease. When the use of the drug was discontinued, the symptoms disappeared. This is just one of numerous cases where plant secondary metabolites are dangerous to humans.

Terpenoids are derived from the basic five-carbon isopentane unit (branched 5-carbon molecule, proper name is 2-methylbutane) and the number of these units in the molecule determines its classification. Some terpenoids actually exist as glycosides, that is, they have a sugar attached. Others contain nitrogen and are therefore known as terpene alkaloids. Terpenoids are normally located in the vacuole of the leaf or root of plants, while some are located outside the leaf.

The terpenoid ipomeamarone is produced in sweet potatoes because of its antifungal action against the pathogen which causes black rot. In the two-lobed glands on the surface of leaves and the seeds of the plant Chrysanthemum parthenium, the terpenoid known as lactose parthenolide is produced. This is toxic to Gram positive bacteria (named because of the way it stains, bacteria are either Gram positive or Gram negative) and filamentous fungi and therefore prevents microbial attack. Sclareol and isosclareol are found on the leaf of Nicotiana glutinosa. These are in high concentrations on the surface of the leaf and are visible as liquid droplets under a microscope. These are structurally similar to gibberellins (hormones produced by fungi) and interfere with normal hormone development. They therefore inhibit fungal growth.

None of these terpenoids, however, are considered safe enough to be used in routine clinical practice.

These are formed around sites of infection in plants. Biosynthetic enzymes not normally found in the plant can be produced by the transfer of genetic information into the plant. This can be seen in tobacco plants where the groundnut stilbene phytoalexin resveratrol is synthesised, which results in the tobacco plant having a better resistance to the established tobacco fungal parasites.

Many new drugs are likely to be plant secondary metabolites or derivatives of them, due to their existing importance. Many laboratories around the world put a lot of time into detecting, isolating and producing pharmaceutically active secondary plant metabolites. Not all plants have been analysed. Only about 10% of the 250,000 species of plants in the world have been tested for any active molecules and less than this have been studied extensively. There are many habitats in which new species are being discovered. It is likely that these areas could yield useful drugs.

There is also research into the possibilities of using cell cultures to produce the secondary metabolites which are or could be of use as medicines. Research has shown that for some metabolites this isn't worthwhile, but for others it may be feasible. Tropane alkaloids are found mainly in Solanaceae plants (the nightshade family). For example, cocaine is found outside in the Erythroxylom coca. It has been used by chemists as a starting structure for modification to create an optimised drug that can be used as a synthetic anaesthetic. Genetic engineering of these plants can create ones which have better alkaloid patterns and therefore are important sources of medicines.

The technology used to create antifungal resistance in tobacco can be used to alter the secondary metabolites in plants. For flavonoids especially, this could be important and is currently under investigation.

The Importance of Plants

Natural products are still used to create medicines or their structures are copied for drugs. Research into this field isn't new but is continuing. We could see plants with optimised alkaloid spectra or transgenic plant cell cultures in the future. We continually need new sources of drugs as more diseases develop. Plants are very likely to continue to be important sources.

The use of plants as medicines is an established area and its use can be seen throughout history. The study of plants used by communities for medicinal use has already yielded several useful drugs. The continuing study of plants is likely to yield new drugs. However, as our environment changes and as the world develops, areas of high biodiversity are losing species. Two thirds of the world's species of plants live in the tropical rainforests which cover about 6% of the surface of the Earth; however this is an area of the world that is rapidly being destroyed. This could have repercussions because if we don't analyse all species in these areas, we could lose sources which could have yielded useful drugs for humans.

1Another alkaloid is strychnine, the poison which is extracted from Strychnos nux-vomica. It is not, however, used in modern medicine.