The Convict Who Sued Satan Content from the guide to life, the universe and everything 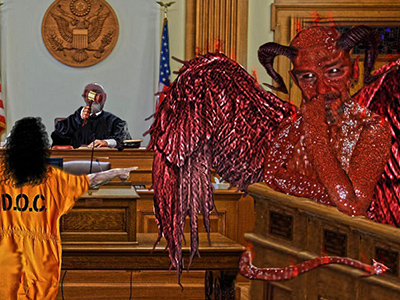 And that Nisi Prius nuisance, who just now is rather rife, the judicial humorist – I've got him on the list!
–   WS Gilbert in 'The Mikado'

US District Court Judge Gerald J Weber had impressive legal credentials: degrees from Harvard and the prestigious University of Pennsylvania law school, honourable service with the US military (he was an intelligence officer during and after the Second World War), a successful law practice in his native Erie, Pennsylvania, and a background teaching law at university level. No wonder Lyndon Johnson appointed him to the federal bench in 1964. Judge Weber was used to hearing serious legal arguments. This is why we feel that he was allowed a moment of judicial levity when confronted with the case of United States ex rel. Gerald Mayo v. Satan and His Staff.

How to Sue the Devil, or Not

A 'jailhouse lawyer' is a prisoner who uses his copious free time to study up on the law and launch lawsuits and appeals on behalf of himself and other prison inmates. The jailhouse lawyer does this despite having no law degree or other background in the law, other than breaking it. Gerald Mayo, a 22-year-old inmate of the Western Penitentiary in Pittsburgh, was beginning his jailhouse lawyer career in 1971. It isn't clear what he was originally in for: this case doesn't tell us. But his pro se lawsuit demonstrated élan and originality. He decided to sue Satan for messing up his life. He lodged his suit in federal court, and in forma pauperis, meaning that he didn't have any money and the court would have to bear the expense. The suit landed in Judge Weber's lap, and entered legal history. Don't believe us? It's listed in LexisNexis, the go-to legal search engine in the US. Those of us who aren't busy racking up 'billable hours' can find it in Harvard Law School's Caselaw Access Project.

The Decision, and Its Precedents

For the foregoing reasons we must exercise our discretion to refuse the prayer of plaintiff to proceed in forma pauperis.

It is ordered that the complaint be given a miscellaneous docket number and leave to proceed in forma pauperis be denied.

In other words, Gerald Mayo probably could sue the devil in a US court –   if he could find him to serve papers on, and if he would pay the court costs himself.

Interestingly, the question of estoppel might hinge on whether a court accepted 'The Devil and Daniel Webster' as evidence that Satan is a US citizen.

What happened next is obvious: the lawsuit didn't go anywhere. Neither did Gerald Mayo, apparently: the next year, he appears to have been involved in a prison riot, a not uncommon occurrence in this notoriously unpleasant prison3. Mayo was convicted by a jury of four counts of assault by prisoner, one count of aggravated assault, and one count of participating in a riot. He lost his appeal against the sentence, and remained in prison.

Gerald Mayo may have had some success as a jailhouse lawyer, however: the group he joined in the early 1970s, called the Imprisoned Citizens Union, sued then-governor Milton Shapp for amelioration of the conditions in Pennsylvania state prisons. Apparently, some relief was granted by the courts, although not all of the court's conditions were finally met. In 1998, the prison system successfully ended the lawsuits in Imprisoned Citizens Union v. Shapp, 11 F. Supp. 2d 586 (E.D. Pa. 1998).

Judge Weber may have the final word, though: according to the US District Court's website, there is 'a legend that Judge Weber's ghost roams the 4th floor at the federal courthouse late at night in a black robe causing elevators to open and cold air to 'swish' past workers and leaves a trail of cigar smoke.' Perhaps this is another example of judicial humour.

1'Estoppel' is the legal rule that prevents someone from asserting something in court as true, when they've already established in a court that the opposite is true.2Jury nullification is called a 'perverse verdict' in the UK. It is one where the jury decides a case against the evidence because they disagree with the legal outcome.3Western State Penitentiary, the first prison west of the Atlantic Plain, housed prisoners of war during the US Civil War. It wasn't closed until 2017.