Emily Carr - Canadian Artist and Author Content from the guide to life, the universe and everything 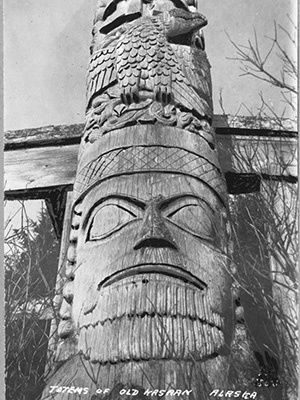 Emily Carr (1871-1945) was an artist who was esteemed in her lifetime more for the stories she wrote about her younger years in the Northwest Coast of Canada than for her art. Her semi-autobiographical writing and her artistic legacy of dramatic, impressionistic paintings, partly created among the Indigenous people of Canada, have at times proved controversial, but in the 21st Century she still retains an important place in the history of Canadian art.

Emily Carr was born on 13 December, 1871, in Victoria on Vancouver Island in British Columbia, Canada. She had four older sisters, three older brothers (all of whom died in infancy) and a younger brother. Her mother had tuberculosis and died in 1886 and her father died in 1888. As a child, Emily resented being told what to do, and preferred being outdoors and spending time with animals rather than humans. This marked her out as different from her sisters, who were studious and able to behave like obedient Victorian children.

Emily's father had encouraged her talent for art, as it was a suitable activity for a girl. At the age of 16 she moved to San Francisco to study at the California School of Design. Her artistic style at that time was traditional - she used watercolour paints and studied genres including still-life and landscape painting. After three years she returned to the family home and earned money as an art teacher.

In 1898, she visited a Nuu-chah-nulth Indigenous Canadian village and a village elder nicknamed her 'Klee Wyck' - 'the laughing one'. She relished being closer to nature than she had been in the colony of Victoria:

We lived on fish and fresh air. We sat on things not meant for sitting on, ate out of vessels not meant to hold food, slept on hardness that bruised us; but the lovely, wild vastness did something to it all.
- Growing Pains - The Autobiography of Emily Carr (1946)

Another life-changing episode began in 1899 when Emily travelled to London to study at the Westminster School of Art. She enjoyed the freedom to study life drawing as well as skills such as clay modelling, but the stress of living in a city in an unfamiliar country1 took its toll on her mental and physical health. First she developed pain in one foot and struggled to walk. Then she was bruised after being crushed in the crowd watching the funeral procession of Queen Victoria. And some time after that, she fell down a flight of stairs. She took bed rest, but developed fatigue, headaches, stomach upsets and numbness - these were diagnosed as symptoms of a 'nervous breakdown'. A doctor sent her to a sanatorium, where she was expected to do almost nothing - in particular no painting or reading - but she was given experimental treatments including electric shocks and massage. After a year and a half she left the sanatorium and tried to return to her studies, but travelled back to Canada in 1904.

She became an art teacher again, and also drew cartoons for publication. Whenever she had the opportunity, she would travel to explore more of the land outside the confines of the colonised area she was familiar with. She visited the town of Sitka, Alaska, where tourists could buy 'Native' souvenirs, and visit Totem Walk where totem poles from various villages had been collected together and lined up in rows. Emily then embarked on a project to visit and paint the villages that still had their totem poles in situ. This project required difficult journeys, and many of the villages she found had been all-but abandoned after the younger villagers travelled to towns to find work.

Still eager to learn more about art, Emily travelled to Paris in 1910. There she met the artist Harry Gibb, an acquaintance of the writer and art critic Gertrude Stein, and began studying at the Académie Colarossi. At the Académie, she learned of Post-Impressionism and was inspired by the works of Vincent van Gogh and Paul Gauguin. She began using oil paints, bolder colours and brushstroke textures to convey the essence of a scene, giving her art more emotion. However, the headaches started again, so she went to Sweden to convalesce for a while and then returned to a more rural part of France. She travelled to Brittany and painted the Breton natives, just as Gauguin had done. Two of her paintings were exhibited at the Salon d'Automne in Paris, bringing her work to a wide audience.

Emily returned to Canada and staged an exhibition of her French work in Vancouver. The bright colours and avant-garde style did not impress, so she sold very little. This affected her reputation, so she was not able to make a living from teaching art as she had before. She continued with the totem pole painting project for a time but then returned to Victoria where she arranged for a small set of apartments to be built in part of her family's estate. She lived in one of the apartments and rented the others out as a boarding house. Many of her tenants were difficult, so she had to resort to shouting, swearing and even violence on occasion, cementing her 'unladylike' reputation. To supplement the small income from rent, she made clay objects decorated with Native Canadian motifs that sold well as souvenirs for tourists. She kept chickens and rabbits for food, and started rearing pedigree dogs to sell. She also built a menagerie of pets - she had a parrot that she had brought with her from France, and then introduced cats, rats and even a monkey that she named Woo and dressed in clothes like a child.

In 1927, her work came to the attention of the Canadian National Gallery, and she was invited to participate in an exhibition entitled 'Canadian West Coast Art, Native and Modern'. Alongside work by First Nations craftspeople, and modern landscape paintings by male artists, 37 of her paintings and items of her handicraft were exhibited.

As a result of the exhibition, Emily was introduced to the Group of Seven, male artists who were looking to establish a Canadian style of art as distinct from the European style. Emily felt inferior to the men, but was inspired by their philosophy and was keen to play a part in the new art as well as 'showing these men that women can hold up their end'. She revisited her previous work (eg Cumshewa/Big Raven) and redid the scenes, developing the dramatic, expressive style2 that she would become famous for.

Emily bought a caravan she nicknamed 'The Elephant' so that she could visit campsites and paint mountains and skies from more comfortable surroundings. She painted with thin oil paints on paper and created landscapes infused with light, in contrast to the dark intensity of her paintings of totem poles and forests. She sold the boarding house and moved to a small cottage. She also took to writing - she had kept a diary in her younger years, and had attended a summer school on creative writing in her older years, so she began writing stories based on her travels.

Since an incident she named the 'Brutal Telling', when she lost respect for her father and developed a fear of men, she never married. She once fell in love with a man who kissed and embraced her, but he took no further interest in her. Another suitor pursued her to England, but she did not love him so she turned down his proposals. Instead, she developed intense friendships and would write passionate letters to her male and female friends.

One such friend was Sophie Frank, who provided companionship for Emily even though she was very different to the artist (she was from an Indigenous village and had had 21 children, who all died in infancy). Another friend was Ira Dilworth - he edited her writing and arranged for some of her stories to be broadcast on the radio. A collection of her stories was published as Klee Wyck in 1941 and it won an award. The Book of Small, about her childhood, was published in 1942 and The House of All Sorts, about her life as a landlady, was published in 1944. As well as being a bestselling author, her art began to sell well, too.

In 1937, Emily had the first in a series of heart attacks, but was able to write in bed while she was recuperating. In the 1940s she revisited her totem pole sketches and created new paintings infused with colour, light and movement thanks to the techniques that she had developed over the years since the sketches had been made. However, she also had two strokes in that period. She died of a heart attack on 2 March, 1945.

After her death, Emily's fame increased. She had established the Emily Carr Trust before she died, to manage her artistic legacy, and the Trust arranged for her paintings and ephemera to be transferred to the Vancouver Art Gallery and the Museum of British Columbia. More of her writing was published - Growing Pains - The Autobiography of Emily Carr appeared in 1946, Pause and The Heart of a Peacock in 1953, and Hundreds and Thousands in 1966. Many of her letters were collected together and published in books, notably Corresponding Influence: Selected Letters of Emily Carr and Ira Dilworth (2006). Schools were named after her, as well as the Emily Carr University of Art and Design. Her childhood home became 'Emily Carr House' and was opened to visitors. Her works have frequently featured in exhibitions in Canada and around the world.

In the 1990s, Emily Carr's art and writing were critically re-examined. In many ways, she had a romanticised view of Indigenous Canadians and the First Nations. Although she lived in the houses of people in several of the villages she visited, she did not have a full appreciation of the different cultures that were simply classed as 'Indians' by the white settlers, and thought of the people as primitives enjoying simpler, more fulfilling lives in nature. This comes across in much of her writing. 'Cultural appropriation' is a label that can be applied to the pottery she created, as she exploited another culture in order to make a profit (she signed this work with the name Klee Wyck). However, she was not unaware of the discrimination and injustice that the First Nations faced.

One of her great shames was when she began making ceramics decorated with stylized Native designs for the tourist market, for the people of the Northwest Coast were not pottery makers, but weavers and basketmakers.
- Cat Klerks, Emily Carr - the Incredible Life and Adventures of a West Coast Artist (2015)

Her paintings of totem poles were not sufficiently detailed and impersonal to be classed as 'ethnological records', as her focus was more on capturing the spirit of the scenes. And much more of her art is about capturing the impressions of landscapes, including buildings and trees. First Nations art historians on balance view her as a friend rather than a foe, and her art has been used as the basis for modern work by Indigenous artists, building on her legacy.

1Her parents were both English, but Emily had not been to England before.2Sometimes referred to as Fauvism or Cubism, her style featured bold use of colour and geometric shapes, but was not as abstract as the work of Fauvists and Cubists like Matisse or Picasso.