Canadian Toponymy Content from the guide to life, the universe and everything 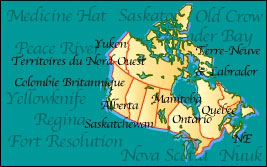 Toponymy is, by definition, the place names of a particular region and the study of those place names. It is derived, in fact, from the two Greek words topos - meaning place and onoma - meaning name. A toponymist will look at not only the surface meaning of the name in question, but also at the history of the area. Doing so reveals the story behind the place, or as geographer David Nelson calls it, the '20% geography and science and 80% ignorance, myth and greed - the arbitrary, impulsive, and ironic, snarled in history and politics'. Few countries, however, have quite so colourful a toponymy as Canada. Perhaps this example says it best; Canada's beloved moose is honoured 662 times in places like Moose Jaw and Moose Factory, but Queen Victoria, patroness of many of the English explorers, can be traced to only 157 sites, a third of which are in Ontario.

The Geographical Names Board

All Canadian place names go through the Geographical Names Board of Canada. Created in 1897, the GNBC has undergone three name changes itself, but it continues to authorise the official names for government maps. It consists of 27 members - one from each province and territory - and government board representatives concerned with mapping, translations, statistics, archives, defence, national parks, and Indian lands. A further four members deal with etymology, classification, computer services (Global Positioning, etc), and undersea - feature names. Today, the GNBC concerns itself with the promotion of official names and encourages the development of international naming polices in conjunction with the United Nations.

Perhaps most importantly, however, the board has developed a list of guidelines for new names. These guidelines, originally created in 1898, are rarely used to initiate naming procedures, but instead are used to judge new names for acceptability. They include common-sense items such as 'Priority is given to names well established in local use', 'personal names are not accepted, unless exceptional circumstances exist', and 'duplication of names should be avoided if confusion may result'. They further spell out more complicated rules for the Romanising of Indian names, and whether the name should be in English or French. With all these guidelines, though, Canada still maintains some interesting names.

The word Canada, for example, is fascinating in its own right. There is some argument that, upon seeing the land, a Portuguese explorer commented, 'Aqui nada' ('here, there is nothing'); this is incorrect. It is further incorrect to say that Canada comes from cañada, the Spanish for 'canyon' or Portuguese for 'path'. Neither the Portuguese nor the Spanish explored Canada to any great degree. In fact, luckily for Canada, its name derives from the Huron word kanata meaning 'cabin' or 'group of huts'. Explorer, Jacques Cartier first used the word in 1550 making Canada unique among New World nations, which were commonly given old-world names.

Two pieces of Canadian geography were given Iberian names: the Strait of Juan de Fuca and Labrador. The strait was either named after Juan de Fuca, a Spanish admiral who was reported to have sailed through the Northwest Passage from Chile, or after Greek navigator Apostolos Valerianos, who found the inlet while sailing for Spain under the name Juan de Fuca. Similarly, Portuguese navigator Joao Alvares Fagundes named Labrador as Terre de Lavradores. It means 'Land of Ploughmen' and refers to the people Fagundes saw working on the shore whom he considered to be potential slaves.

Despite these two oddities, most of Canada's toponymy comes from the native languages, and many places are reverting to their original, native names. The new province of Nunavut, for example, effectively turns one-fifth of the country over to the Inuit; fittingly, nunavut, means 'our land'.

Similarly, other native names are descriptive in nature, and many of them centre on the name of a river or lake. Saskatchewan and Yukon come from kisiskachewan and youcon, and mean 'swift-flowing river' and 'great river' respectively. Likewise, Manitoba can be traced back to Lake Manitoba, the legendary home of the Cree Great Spirit, Manatuapa. Saskatoon refers to 'fruit of the tree of much wood', or the serviceberries which populated the area. Even Québec is the French form of the Algonquian word quilibek, which denotes the narrowing of the St Lawrence River at that site.

In fact, the two cities most important to Canada, Toronto and Ottawa, also have names derived from native words and are also located in a province with a native derived name. Toronto, Canada's most populous city, was founded as York in honour of the Duke of York, but it was renamed later and given an Iroquois title meaning 'timber in the water' or 'place of plenty'. Canada's capital, Ottawa, was given the name of a local Indian tribe, the Outaouacs; their name means 'traders'. Moreover, Ontario, the province containing the two cities, gets its name through Lake Ontario, which forms part of its south-eastern boarder. Though some speculate that the name comes from the Iroquois for 'beautiful lake', oniatar-io, other toponymists feel that this is too vague for an Indian name. They suggest that it comes from ntouhonorons, the name the Seneca tribe used for themselves.

Other, more descriptive names are the English or French translations of aboriginal names. Yellowknife and Medicine Hat, for example, relate to the adornments of the natives of the area. Yellowknife refers to the yellow copper used in tool making by the Indians of the Northwest Territories. Medicine Hat, though, is more obscure. It is a translation of saamis, which means 'hat of a medicine man'. Because of this, toponymists argue whether it refers to the notoriety of a particular medicine man's hat or to a battle in which a medicine man lost his hat or to something else along those lines. Along the same lines, Great Bear Lake actually went through two name changes: first from the native to the French Lac du Grand Ours to its current English form.

Strangely, one name that sounds like it might fit this category, Kicking Horse Pass, does not. In fact, Royal Surveyor Sir James Hector named it in 1858, while he crossed the Canadian Rockies through the pass. His account tells how one of his packhorses became spooked and kicked him, thus giving the pass its name.

Actually, much of Canada's toponymy comes from its explorers. Granville was renamed after George Vancouver in 1886. He mapped Vancouver Island in 1792. Similarly Samuel de Champlain, Alexander Mackenzie, Simon Fraser, and George Dawson gave their names to the bodies of water they found. Furthermore, there are more than 30 features with the name Franklin - including Mt Franklin, Franklin Lake, Franklin Glacier, and three different cities - all of which can be traced to Sir John Franklin who explored much of northern Canada looking for the Northwest Passage.

Moreover, if the explorer didn't want to name the area after himself, he would name it after a patron. It is, in fact, for this reason that there are so many places named after British royalty, especially Queen Victoria. Even the city of Regina was named after Victoria, as it means queen in Latin. The wife of Governor General Lord Lorne suggested the name change over the native translation Pile of Bones. Queen Victoria's husband, the Prince Consort, Albert, was remembered in the province of Alberta and the city of Prince Albert in Saskatchewan. Likewise, lesser known patrons such as Axel Heiberg and Ellef Ringnes (supporters of Norwegian geophysicist Harald Sverdrup) and Sir Felix Booth (supporter of Sir James Ross) were honoured with Heiberg and Ringnes Islands and the Boothia Peninsula, respectively.

Sometimes, simply promoting the colonisation of an area would get credit. For example Nova Scotia was originally just called New Scotland, but when Sir William Alexander got the land grant for colonisation, the people liked the name in the Latin contract so much that they decided to change it permanently. Likewise, its capital, Halifax, was named after the Earl of Halifax who actively supported populating the island.

Names Given by the People

On the other hand, though the Queen Charlotte Islands sound like they were named after royalty, or at least a sponsor, they were actually named after Captain George Dixon's ship. Therefore they form part of a group of places named by or after the workers who helped found it. Others in this group include Uranium City, Asbestos, Petrolia, and Val-d'Or, all of which derive from the resource mined there. Furthermore, army engineers named Snafu and Tarfu Lakes in the Yukon Territory after two coarse acronyms of the Second World War era. Perhaps the oldest example of such naming, however, is Klondike. It comes from the Indian words thron-diuck, or 'hammer water', and refers to the sticks pounded into the riverbed to support salmon nets.

Contrary to these more plebeian names, though, Canadian toponymy also lists the names of many saints, especially in Québec. Cartier and De Champlain, for example, named the St Lawrence and St John River, respectively, after the feast days on which they were discovered. The 'sault' in the name Sault-Ste-Marie comes from an Old French word meaning 'to jump', so the name indicates the point at which St. Mary's River had to be portaged1 because of rapids. Other names such as St Hyacinthe, St Lambert, and St Jean-sur-Richelieu were given in honour of community religious leaders. One of the most bizarre saint names, however, has to be Saint-Louis-du-Ha!Ha! No, really. The name actually implies the dead-end nature of the town.

Names from other Places

The towns of other countries also have a big influence on Canada's toponymy. Calgary was Colonel James McLeod's hometown on the Isle of Mull in Scotland; Edmonton was named after a London suburb, the birthplace of William Tomison's company clerk. Other British names are found in Ontario in places like Stratford, Windsor, Buckingham, Kensington and Newcastle. Similarly, 80% of the names in Québec are of French origin. Montréal, for example, is derived from the French name given to the nearby extinct volcano in honour of King Frances I, Mont Roiall. Elsewhere are Lac la Ronge (Rodent Lake), Belle Isle ('Beautiful Island'), Trois-Rivières ('Three Rivers'), and Rivière-du-Loup ('Wolf River'). Of course, other countries are represented as well. Germany gave Dresden and New Hamburg; Russia gave Moscow; Poland gave Warsaw; Switzerland gave Zurich; even places like India and Iceland make appearances with Delhi and Gimli. Names like these show Canada's truly international appeal.