Moose Content from the guide to life, the universe and everything 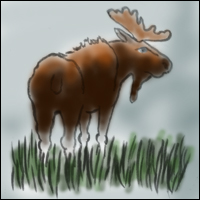 What exactly are moose? Where can you find one? How big are they? Are they nice creatures?

These are just some of the typical questions that are continually asked by people curious to learn more about these magnificent, yet enigmatic creatures. Those most able to answer these questions are people who live in areas where moose can be found, such as Alaska, Canada and some parts of Idaho, Montana, and Wyoming.

What Exactly are Moose?

Moose are large, gangly-looking cloven-hooved ruminants that are mammalian and usually solitary, except for the winter months. They live typically in relatively remote forests in North America, particularly near lakes and waterways. Moose have shaggy brown coats that provide ample protection from the cold. Female moose may keep their young with them for up to two years, then they part ways. Males and females only come together during the summer months to mate, and then the males go off again into the mountains.

Bull moose are huge, dangerous creatures. They are a solid half-ton of brawny sturdiness. They have large, velvet-covered antlers that are a prize for sportsmen and hunters, and are thus often the most treasured trophy adorning the walls of many hunting lodges. They are unmistakable and rather odd-looking. Moose shed their antlers annually, just like other closely-related species of deer and elk, their European cousins.

Where Can you Find One?

You can find a moose in any sparsely populated area near mountains and water, as long as some sort of vegetation is present; that is to say, the far northwestern regions of North America and the northernmost part of the continental United States. Moose are highly adaptable and mobile, but they generally return to the same areas every year to mate and to find food.

How Big Are They?

Well, they can weigh over half a ton. They are five or six feet tall at the shoulder, with an extra foot and a half of neck and head. Add to that an extra foot of antlers, are you're talking about a gigantic animal. They are about five feet long and two and a half feet in diameter. They have long, gawky legs with knobby knees and a hoof the size of a bear's paw. A single wolf cannot take down a moose, and they rarely try. Generally, wolves go after sick, young, or already dead moose. Once in a while, an attack by a pack of wolves on a moose is reported.

What Kind of Rights Are there for Hunting Moose?

The laws change wherever you are, but Alaskan law provides a moose hunting season, much like a deer season, and many people take advantage of this. There are laws that protect the public and the creatures, such as no hunting in suburban or urban areas.

Another local regulation deals with the what type of body-parts you can take off the moose. If the state troopers catch anyone in possession of only moose antlers and the rest of the carcass is left to rot, everything they were using to hunt is confiscated: trucks, RVs, guns, coolers, food, boats, ATVs, etc. A fine is also issued, while one attempts to get one's car, RV, gun, cooler, gun, boat, ATV, etc, out of impoundment.

So, if you're going moose-hunting, be sure of the laws of the state, province, or country you happen to be in.

Are they Nice Creatures?

As with any other wild animal, they can be highly unpredictable when cornered, but they are generally docile and quite serene. That is, unless you inadvertently get between a female and her baby. Or if you get too close. A full-grown moose can destroy a car and they have been known to die of heart failure because they over-exert themselves when chasing down a person in a vehicle for miles at 20 or 30mph.

So, yes they're nice, just don't cross them. Essentially, don't get too close - leave them alone and they'll leave you alone.