'Let George Do It': A Phrase, and the Stories Behind It Content from the guide to life, the universe and everything 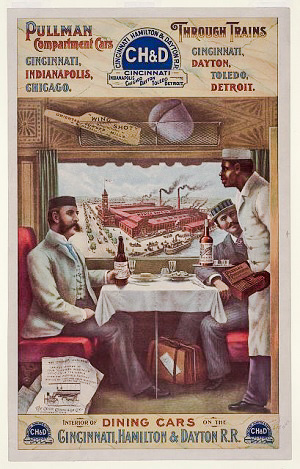 A problem each generation faces in its struggle to define itself verbally is the unfortunate fact that it inherits its language from other people. People who aren't around anymore, and who can't explain where all the expressions we use came from. Why 'a rock and a hard place'? Just where is the 'catbird's seat'? These old sayings can drive us batty.

When we ask around for the origin of a phrase, people shrug. Finally, some self-appointed 'language expert', usually with a newspaper column, writes out the 'definitive' answer. Unfortunately, very often, the 'expert' just made up the answer on the spot. It is not rooted in any real research. But if the pseudo-answer is imaginative enough, others may like it and pass it along as truth. This process creates a 'folk etymology'. Folk etymologies make folklorists tear their hair out. Folklorists want to know.

Today we will consider the origin of the expression 'Let George do it.' Where did this come from? Where do people think it came from? And why does it matter?

Conventional Wisdom, and Where it Came From

To begin with, everybody agrees that the phrase 'Let George do it,' wherever it came from, means 'I don't want to do this, it's too much work. I want to delegate the job to someone else.' Now that that's out of the way, let's see what the 21st Century thinks about the phrase.

Less than a month later, a helpful person replied that there were, indeed, examples of 'Let George do it' from before 1928, pointing out that the Oxford English Dictionary   (OED) had traced the phrase back as far as 1910. (More on that later.) The correspondent concluded:

Who was George? Maybe a real person: more likely not.
The phrase was for a time, probably in the 1940s, a kind of fad expression. Whenever it could be worked into the conversation it was. "I don't know if I can handle the mountain of dishes I'll find when I get home." "Let George do it." There was no particular George ever associated with the phrase, as far as I know.
– Posted by Smokey Stover on August 26, 2008 at 05:03, phrases.org.uk bulletin board

It's true: 'Let George do it' was a popular phrase in both British and American English in the 1940s. We can find proof of that in two entertainment sources. One was a British film from 1940 starring George Formby. (No, he wasn't the George we're looking for.) Formby was legendary in the UK. For everybody else: Formby was a comedian who was famous for playing the ukulele, to which he usually sang sexually suggestive songs like 'When I'm Cleanin' Windas', rather than the Hawaiian songs traditionally associated with the instrument elsewhere.

In Let George Do It!, Formby is a ukulele player who, more or less by accident, becomes a war hero, foiling Nazi spies and being shot out of a torpedo. As one does in British wartime comedy musicals. He even finds time to sing 'Grandad's Flannelette Nightshirt'. The film was a rousing success in wartime Britain.

On the other side of the Pond, US radio audiences followed the adventures of George Valentine (played by Bob Bailey), a detective, in Let George Do It. The show, sponsored by Standard Oil, ran from 1946 to 1954 and featured excitement, adventure, and really cheesy organ music. (They fired the orchestra to save money.) Valentine ran a personal ad in the newspaper: 'Danger's my stock in trade. If the job's too tough for you to handle, you've got a job for me. George Valentine. Write full details!' So his clients 'let George do it'.

The film and radio series demonstrate that the phrase was well-known. But where did it come from? Nobody seemed to know. Maybe the 'language experts' could help?

Let's go back a couple of decades and pick up one of these 'experts'. His name was HL Mencken, and he was a newspaperman known for his acerbic commentary and strongly-held opinions. He was born in Baltimore, Maryland, but grew up bilingual in German and English. His book The American Language, first published in 1919, was widely read and taken for gospel, but his prejudices were definitely showing. Here's what he says about 'slang'.

In its origin it is nearly always respectable; it is devised not by the stupid populace, but by individuals of wit and ingenuity; as Whitney says, it is a product of an "exuberance of mental activity, and the natural delight of language-making." But when its inventions happen to strike the popular fancy and are adopted by the mob, they are soon worn thread-bare and so lose all piquancy and significance...
–   The American Language, p 308

So far, so snobbish. In the same paragraph, Mencken the expert lists a number of examples of this 'exuberance of mental activity' that has become thread-bare, such as 'Let her go, Gallegher', 'Shoo-fly, don't bother me', and 'Let George do it'. Aha. And where does he claim this expression comes from? From French. From the French court of Louis XII, no less.

It originated in France, as "Laissez faire à Georges," during the fifteenth century, and at the start had satirical reference to the multiform activities of Cardinal Georges d'Amboise, prime minister to Louis XII. It later became common slang, was translated into English, had a revival during the early days of David Lloyd-George's meteoric career, was adopted into American without any comprehension of either its first or its latest significance, and enjoyed the brief popularity of a year.
– pp 308-309, ibid.

As we shall demonstrate, this claim is completely false, on two counts: the connection between the French court and US usage is non-existent, and the phrase 'Let George do it' definitely didn't fade within a year.

The OED does not buy the Louis XII connection. To be sure, there was such a French expression, but Laissez faire à Georges has only been traced by linguistic researchers from the 17th Century to around 1842, and not in English. There is no reason to believe a popular expression in the US and UK would have jumped languages, only to show up around 1904, when Irish-American cartoonist George McManus drew a comic strip called, wait for it, Let George Do It. McManus' strip even led to a series of two-reel silent films.

The OED and others of more authority than ever Mencken was conclude that yes, there was a French phrase about George and 'doing it', and there is an English-language phrase, probably from the US, late 19th or early 20th centuries, where George is told to do it – but they probably aren't related. Proverb researcher and genuine expert Professor Wolfgang Mieder of the University of Vermont is very happy about this development, in fact. It proves a thesis of his that language, like biology, is capable of polygenesis. Just as different continents can independently develop animals with similar functions, like tenrecs and hedgehogs, so, too, different languages can develop unrelated expressions that serve similar functions. In other words, Georges is not George, but either one of them can do it.

We recommend Professor Mieder's scholarly article, called 'Laissez faire à George and Let George do it: A Case of Paremiological Polygenesis'. It's an engrossing read. Not only does he explain that 'Georges' is not 'George', but he lets us know who George is. And thereby hangs an even more instructive tale: one which involves labour and transportation history. 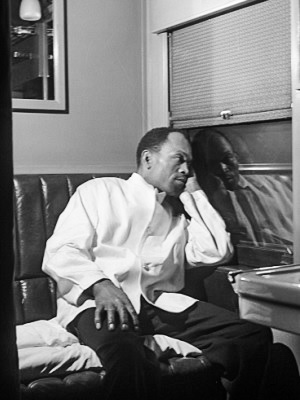 George Pullman was the king of railway sleeping cars. In 1857, he started a company that soon became synonymous with luxury and comfort in travel. He lent his personal sleeper, the Pioneer, to bring Mrs Abraham Lincoln home to Springfield in 1865 for her husband's funeral. Pullman sleepers had a reputation for comfort and excellent service, largely due to the work of Pullman porters, who were all African American men.

Pullman porters appreciated the steady work. However, the hours were long, and the pay low. To add insult to injury, commercial travellers, who had a reputation for being brash and vulgar, insisted on calling all porters 'George'. The name George came from George Pullman, but this was also a racial slur. It implied that Pullman porters were all George's 'boys', doing his bidding1. Pullman porters carried luggage, made up beds, served meals, shined shoes, and were generally at the beck and call of the railway passengers. Whatever needed to be done, the slogan went, 'let George do it.'

The saying 'let George do it' soon divorced itself from its origins. People who had no mental connections with railways used the phrase to refer to shirking responsibility. It was easily associated with anyone named George – even the fictional George Valentine or the real George Formby. And there we have the origin of the phrase. In spite of claims that the phrase is obsolete, it still pops up occasionally.

But What About the Pullman Porters?

The Pullman porters seriously resented being called by the generic name 'George'. They would often reply to calls of George, 'George not on the train today'. In 1925, they did something about it. A. Philip Randolph, an African American labour leader, organised the Brotherhood of Sleeping Car Porters (BSCP). In addition to negotiating better pay, hours, and working conditions, the BSCP insisted that each porter's name be printed on a card and displayed in the sleeping compartment where he worked.

The epithet 'George', by which they [the porters] were known generally, did much to create and maintain the stereotypes. The term was associated with the days of slavery, because it identified porters as the property of George Pullman...
– Jack Santino, Miles of Smiles, Years of Struggle: Stories of Black Pullman Porters, 1989, quoted in Mieder, 'Laissez faire à George and Let George do it: A Case of Paremiological Polygenesis'

How important was that to Pullman porters? One of them, a Jamaican-Canadian named Stanley G Grizzle, entitled his memoirs My Name's Not George: The Story of the Brotherhood of Sleeping Car Porters.

Of course, while the BSCP was taking itself, and human dignity, seriously, there were always elements who could be counted on to do the opposite and make inappropriate jokes.

Society for the Prevention of Calling Sleeping-Car Porters 'George'
Dear 'George':
At last we have gotten a new supply of membership cards...
The Associated Press and TIME both spread the news of this election, and applications for many memberships are coming in from all over the country.
I enclose one of the new membership cards made out in your name, and I hope you will have some fun with it...
Fraternally yours,
George W Dulany

Yes, there was a 'jocular' fraternal organisation of (white, prominent) men named 'George' called the SPCSCPG. (Supposedly, it was funny for prominent white men to be offended because their name was used to address a sleeping car porter.) Admiral George Dewey, the celebrated victor at the Battle of Manila Bay in the Spanish-American War (1898), was its first president. This 'fun' organisation eventually claimed over 30,000 members, including, it is alleged, Britain's King George V and France's Georges Clemenceau.

1George Pullman took advantage of recently freed slave labour by initially not paying his porters and instead expecting them to live off tips, with attendants often on duty for 24 hours or more at a time and forbidden from sleeping. Yet for all the patronising racism porter jobs were highly sought after and porters frequently recommended their relatives and passed down through families, with sons following fathers into the job.