George Formby - the Entertainer Content from the guide to life, the universe and everything 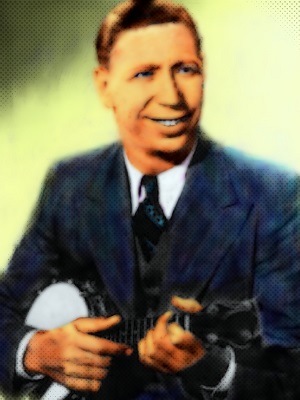 George Formby was one of the most popular British entertainers of the 20th Century. His career as a comedian, actor, singer and songwriter lasted for 40 years - from his debut in 1921 until his death in 1961. He appeared in 21 hit films, made over 230 records and did much to help keep the British people's spirits high during the Second World War.

He travelled widely throughout Europe and the Middle East during the war, and entertained an estimated three million Allied servicemen and women. His contribution to the war effort won official recognition in the form of medals from two countries. The first nation to honour Formby was the Soviet Union, where he was remarkably popular; in 1943 the Soviet government awarded Formby the Order of Lenin. His homeland honoured him at the end of the war, when Formby was awarded an OBE (Officer of the order of the British Empire).

George Formby was born George Hoy Booth in Wigan, Lancashire, England on 26 May, 1904. His father was a successful music hall entertainer, George Formby Senior (real name James Booth). Young George made his showbiz debut at the age of ten, playing a jockey in the silent racing drama By The Shortest Of Heads - but at the time, this was intended to be a one-off. Formby Senior didn't want any of his family to follow him into show business, but he had no such objections to the idea of one of his offspring following a sporting career. It would have been easy for young George to play a jockey in his first film, because he actually was one at the time it was made.

He became an apprentice jockey at the age of seven, and competed in his first professional race when he was ten. However, as George grew up, he became too heavy for horse racing. When his father died in 1921, George decided that he would after all launch a showbiz career.

Formby is often referred to as having been a ukulele player - this is probably due in part to his hit song 'With My Little Ukulele In My Hand'. In fact, the instrument he played most was a banjo-ukulele1, ideal for the brisk, breezy comic songs that were Formby's speciality. He always sang (and spoke) in a broad Lancashire accent, but that didn't seem to diminish the breadth of his appeal.

His first hit song came in 1932 with 'Chinese Laundry Blues'. It was originally released as the B-side of 'Do De O Do', a single Formby recorded with the then famous Jack Hylton Band - but it was the catchy tale of Mr Wu the Chinese laundryman that captured the public imagination. It sparked off a long series of hits of which the most famous included 'When I'm Cleaning Windows', 'Leaning On A Lamp Post' and 'Why Don't Women Like Me'.

Formby's film persona - shy, naive and awkward when encountering the opposite sex - was quite at odds with the risque lyrical content of his songs. Today, Formby's songs would not raise an eyebrow, but in his time George must have felt the touch of a BBC blue pencil or two.

The problem for would-be censors, though, was that Formby's songs were only really rude if you wanted them to be. He was a master of innuendo and double entendre. The lyric of 'With My Little Stick Of Blackpool Rock', for instance, can be read as an innocent tale about a man enjoying sticks of rock candy while on holiday at a popular Lancashire seaside resort. You might decide for yourself that the stick of rock was a phallic symbol, or read something sexual into lines like:

It may be sticky but I never complain
It's nice to have a nibble at it now and again.

However, nothing was ever made explicit, and George's cheeky grin was so charming that it was difficult for anyone to get too offended by him.

Boots! Boots! (1932) was the first of a long series of successful film vehicles for Formby. His films often followed a similar formula. George would be cast as a hapless accidental hero who stumbles into dramatic situations by chance, outwits the villains, gets the girl, and sings a couple of songs while he goes about it. Just as a modern-day recording artist will release a series of singles taken from an album, so Formby would include three or four songs in each film and then release them one by one on record. When Formby's career was at its peak, 'on record' meant 'on heavy 78rpm singles'. Formby's film career ended before the appearance of the first long-playing records in 1948 - which probably benefited the films, as there would have been no temptation to try to squeeze in extra songs to provide enough material for a soundtrack album. The sale of sheet music of popular songs was big business in the 1930s and 1940s, and would have generated a sizeable slice of Formby's income during that period. In this way, Formby's film and music careers promoted each other.

Formby's catchphrases included 'Never touched me' after just escaping from a scrape, 'Mother!' while in the middle of a scrape, and 'It's turned out nice again, hasn't it?', usually at the end of the film when all of the scrapes have been dealt with.

His wife and manager, Beryl, was fiercely jealous and ruled George with a rod of iron. She rarely allowed him to kiss his leading lady on screen, and she closely controlled Formby's financial affairs.

Beryl would appear to have done a great job in her role as Formby's manager, from a financial point of view at least. In the late 1930s and early 1940s, George Formby was Britain's highest-paid entertainer, earning in the region of £90,000 to £100,000 per year - an astronomical income in those days. During his last television appearance in December 1960, Formby said that Beryl had been the driving force behind his success2.

After the war, Formby found himself out of fashion. After George In Civvy Street (1946), the film offers dried up. But he continued to tour, and found a new outlet as a stage actor. In 1951, George starred in London's West End at the Palace Theatre in the musical comedy Zip Goes A Million, which became a huge success.

Sadly, the show's extended run took its toll on Formby's health, which had already been weakened by his wartime exertions. While being driven home after a performance in 1952, George suffered a massive heart attack.

Few expected to see him perform again. But two years later, he topped the bill at the London Palladium Theatre in the variety revue Fun And The Fair. In 1960 he returned to the pop charts, when his double A-sided single 'Happy Go Lucky Me'/'Banjo Boy' reached the UK Top 40. Formby returned posthumously to the UK singles chart in 1994, when dance music duo 2 In A Tent reached the Top 30 with 'When I'm Cleaning Windows (Turned Out Nice Again)'. As its title suggests, the single featured samples from some of George's greatest hits.

George's wife Beryl died on Christmas Eve, 1960. A few weeks later, he caused a scandal when he announced his engagement to Pat Howson, a schoolteacher 20 years his junior. Some were outraged at Formby for announcing his intention to marry again so soon after his wife's death, but he and Howson defied their critics and made plans for a spring wedding.

Sadly, George didn't live long enough to fulfil those plans. He suffered another heart attack and died on 6 March, 1961, at the age of 56.

His funeral took place at St Charles Roman Catholic Church, Liverpool. An estimated 100,000 mourners turned out to see the funeral cortege as it travelled the 20 miles from Liverpool to Warrington, Cheshire, where George was buried in the Formby family grave at the Manchester Road Cemetery.

George Formby left the world a rich legacy of songs and films. Many of his films crop up on British television either during the afternoons or at some godless hour of the morning. But nothing can change the fact that for many years, George Formby was Lancashire's best-loved son.

The Films Of George Formby

1The 'banjolele' is a four-stringed musical instrument with a small banjo-type body and a fretted ukulele neck.2He also confessed that he had never learned how to read and write properly.3A made-for-TV movie featuring archive clips of Formby in action.