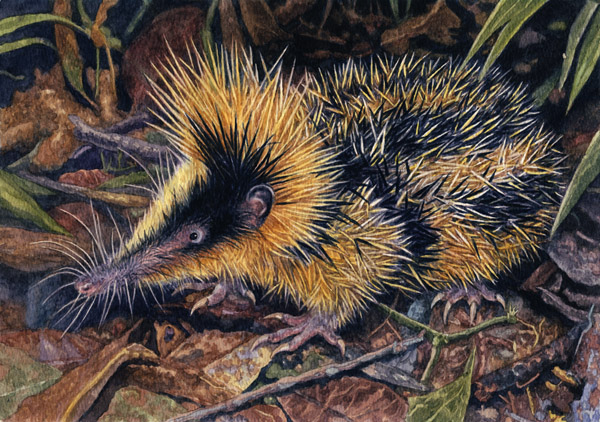 Here I have for you a most unique and unusual critter! This is a Lowland Streaked Tenrec, Hemicentetes semispinosus. This is not something that occurs in my country, South Africa – it actually lives on the island of Madagascar, off the eastern coast of Africa. I have a major fascination with Madagascar and its wildlife, and have already featured many of its species in this column, and will certainly feature many more.

Many of my readers have probably never even heard of a tenrec. So just what sort of a thing is it? The tenrecs are a group associated with Madagascar, where about thirty species survive today. But there are actually related animals on the continent of Africa: the otter shrews! These small aquatic mammals are indeed shrew-like as well as otter-like, and only three species are known at present. The tenrecs of Madagascar likely came from Africa initially, in the form of a small critter similar to an otter shrew, but not as specialized for living in water. The colonization event must have happened perhaps sixty or fifty million years ago, probably in the form of animals floating over the ocean (that even then separated Madagascar from Africa) on large pieces of driftwood, or even small rafts of vegetation washed out to sea after massive floods. The original tenrec ancestor was likely a small, shrew-like animal. Subsequently, these animals must have almost completely died out in Africa, leaving only the three highly specialized otter shrews. On Madagascar, however, they found ripe virgin territory, the proverbial land of milk and honey, and rapidly and massively diversified. The thirty tenrec species living there today come in a great range of sizes and shapes, including shrew-like, mole-like, rat-like and hedgehog-like, as well as an aquatic species close in form to the African otter shrews.

The tenrec ancestors likely died out in Africa as a result of having to compete with animals like shrews, mice, rats, sengis, golden moles and others. Since these competing animals did not exist on Madagascar, the tenrecs there could indeed claim the habitats and lifestyles of such critters for themselves. The wonderful thing is how the tenrecs then also evolved to the same kinds of shapes and outward appearance of these other things! It is especially noticeable in the hedgehog-like tenrecs. The lowland streaked tenrec is one of these, along with the highland streaked tenrec, the two species called hedgehog tenrecs, and the common tenrec. Indeed, the hedgehog tenrecs themselves would simply be called hedgehogs by most people who saw them, so similar are they. The two species of streaked tenrec, while having hedgehog-like spines, at least differ from them in having bold colours and streaky patterns.


The evolution goes beyond the mere presence of spines. The spines themselves have barbed tips and are detachable, so that the tenrec can leave some spines in its attacker and escape itself. The two hedgehog tenrecs furthermore curl up into spiny balls just like hedgehogs do, when threatened. The streaky tenrecs however, 'throw' the spines on their heads and necks forward and will jab them towards their attackers, where they too will remain embedded while detaching from the tenrec's loose skin. In this it's a bit more like a porcupine than a hedgehog.


For a long time, tenrecs were considered to belong to the insectivore order, which included moles, shrews and hedgehogs. Today genetic studies have revealed that they are only distantly related to these, or indeed to any other mammalian group. They do seem to be somewhat more closely related to certain African groups like the golden moles, sengis, and perhaps hyraxes as well. This very distant relationship makes their close resemblance to hedgehogs and other things even more remarkable.

Apart from their very distant relationship to other mammals, tenrecs also have features zoologists long considered to be 'primitive' for mammals. Indeed, the mammals that lived during the time when the dinosaurs still ruled, must have been quite similar to the living tenrecs: most of them were small and shrew- or mouse-like. Furthermore, tenrecs have fairly generalist teeth, and a larger number than most other living mammals (which again is considered a primitive feature). They seem to have a less well-tuned metabolism, many of them experiencing periods of reduced activity and torpor during times when not enough food is available. Tenrecs also have a somewhat sprawling limb posture, and most primitive of all, only a single genital and excretory opening, called a cloaca, like the cloaca of reptiles and birds. Lastly, at least some are very prolific, the common tenrec having fifteen to twenty or more babies per litter. This, too, is more like what seemed to be the case in ancient mammals: the first species had many babies but not so much parental care, while later on they evolved to have fewer offspring but much elaborated parental care.


But all this doesn't really mean that tenrecs are primitive or 'living fossils'. Like all animals alive right now, they are successfully adapted to their environments and lifestyles. Indeed, tenrecs are amazing for still surviving in such diversity on Madagascar, where a great deal of the species that originally inhabited the island have now gone extinct as a result of human activity. Tenrecs' fecundity, adaptability and versatility have enabled them to remain thriving, even around humans.


This brings us to the streaked tenrecs. These two species with their bold colours are among the easiest of Madagascan mammals to identify. The lowland streaked tenrec occurs in mainly rainforest regions in the east of the island, whereas the highland streaked tenrec lives around savannah and forest areas more centrally. Both species have spines mixed in with bristly hairs on their bodies, that are arranged in bright yellow bands alternating with black. They don't have visible tails. Both species have long, thin, pointy snouts and smell is certainly important to them in finding their food – mainly invertebrates like earthworms and insects. They sometimes eat fruit. Both streaked tenrec species are rather small, reaching a bodyweight of about 200 g/half a pound. The spines are longest on their heads, forming a 'crown' that can be thrust forward towards any animal that the tenrecs feel threatened by.

The striped tenrecs are most remarkable for doing something no other mammal species is known to do: making sounds through stridulation! This means one part of the body being rubbed against another. Insects like crickets do this, rubbing the edges of their wings together; some birds also make sounds by rubbing wing or tail feathers together. But no mammal is known to do this – apart from the tenrecs! Streaked tenrecs do it by rubbing the spines on their backs together. These are specialized quills, not barbed like the defensive spines. They make a soft, high-pitched sound, mostly beyond human hearing.

Apart from the sounds by rubbing together the quills, streaked tenrecs also make high-pitched clicks with their tongues. The stridulating and clicking calls are both used by animals foraging on the forest floor to help them stay in touch with each other, especially on dark nights. But why should they have two different kinds of call – those made by stridulation as well as by tongue-clicking? We still don't quite know! The tenrecs are being investigated by scientists armed with bat detectors, which reduce the frequency of the calls to the point where humans can hear them.


It has even been theorized that the tenrecs might be using their high frequency calls – both tongue clicking and stridulation – to actually navigate their way in the dark forest undergrowth at night! This, called echolocation, is the way bats (also only distantly related to tenrecs) navigate by night. But we still don't have enough data on this to be able to say for sure that it is what the tenrecs do. It certainly is possible. All in all these tenrecs certainly show us how much we still might learn about, and from, our fellow critters.