The Last Escaped POW: How Georg Gaertner Spent 40 Years on the Run and Invented a Tennis Racquet Content from the guide to life, the universe and everything 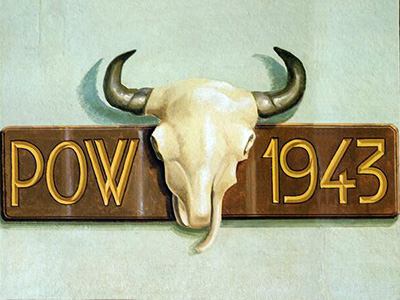 That's what the plaque says over the cremated remains in the Foothills Gardens of Memory in Longmont, Boulder County, Colorado. Like every gravestone in every cemetery in the world, this one hides a story. George Gärtner was, indeed, a displaced person. Just how displaced he was can be measured in miles and years – the distance between Silesia and the US west coast, and the 40 years he spent as a fugitive on the FBI's Most Wanted list. While Dennis F Whiles went about his business as a harmless ski instructor, tennis pro, and construction-supplies salesman, his youthful mugshot hung in post offices around the country. How in the world did he get there, we wonder? It's an interesting story: Georg Gaertner was the last escaped German prisoner of war (POW) at large in the US.

Why (and How) a Scared Soldier Decided to Escape

During the Second World War, the United States had around half a million prisoners of war scattered in camps around the country. Most of them, like Georg Gärtner, were members of Rommel's Afrika Korps, a fighting force that had been captured en masse in the North African desert. Approximately 450,000 of them spent the rest of the war in comparative safety and comfort in the US, well-housed and well-fed. Among these was Georg Gärtner, a young man in his early 20s from Schweidnitz, Silesia, in the east of Germany. Gärtner had studied English in school, and worked in the camp as a translator. He was a bright kid.

During the course of the war, 2,222 German prisoners escaped from the camps. Most of them were recaptured pretty quickly. Some of them escaped out of a sense of adventure, being young and bored. Others did it out of a sense of duty, like POWs everywhere. Few of them had much of a plan, or the skills necessary to elude the authorities for very long. Mostly, they were defeated by the sheer size of North America. By the end of the war, the FBI had a mere six stragglers left on their books unaccounted for.

Gärtner didn't decide to escape until September 1945, after the war was over. That's when he found out that the Allies intended to send him to his hometown. But Schweidnitz was now in Poland. He didn't want to live in Poland. The Soviets might shoot him, or send him to Siberia. This happened to a lot of German soldiers, and even if they survived, they had a miserable time of it. Besides, Gärtner had been reading the US newspapers thoughtfully provided at the camp. In this country, you could criticise the government with impunity – the papers did it all the time. There were opportunities and choices for a young man. He decided he wanted to be an American. So Gärtner escaped from his camp in New Mexico while his fellow prisoners were watching a Western on Movie Night.

Gärtner's plan was simple: slip under the fence in a dark corner and run like heck for the railroad tracks a couple of miles away. He'd carefully observed the train times from the camp. What he hadn't observed was the Moon. It was full, which gave him a fright when he realised how well-lit his escape was. Nevertheless, he made it to the train and hopped into a freight car. By the time he was missed at morning roll call, he was well on his way to California, which he reached three days later, starving and parched with thirst. In the meantime, camp authorities were busy scouring New Mexico for him. They didn't notice the train.

Gärtner did two clever things: he didn't use any version of his own name, becoming first 'Peter Peterson', a Norwegian, and later, when his English improved, Dennis Whiles in honour of a friendly family from Arkansas. The second clever thing he did was to go where the undocumented go: he became a fruit-picker among the migrant farm workers of California. A lot of them were 'Okies' – economic refugees from Oklahoma, Texas, and Arkansas who had migrated to California during the Great Depression. Gärtner hid out among them, practising his English and earning his way, until his language skills and knowledge of the territory permitted him to move up. He became a dishwasher.

Meanwhile, the war over, the US sent the prisoners home, wherever home was judged to be. Along with the other five fugitives, Georg ended up as a photo on the walls of post offices: 'WANTED: Georg Gaertner. Eyes blue, hair brown, complexion fair, race white, dimpled chin.' He didn't exactly stick out in a crowd.

The Next 40 Years Weren't Exactly Boring

Gärtner moved from job to job and place to place. He was afraid to get too close to people. He drove for years without a licence because he wasn't aware of how superficial the background checks would be. To his surprise, he got a Social Security card with no problem at all. The US had very little in the way of personal documentation back in those heady days of freedom. Still, the fugitive was supercautious.

He took work wherever he could, using the skills he had. Trained as a draughtsman in the Oberrealschule, he got jobs with construction companies as a materials estimator. If the company got government contracts, requiring a security rating for employees, he moved on. He worked for some years as a salesman for pre-hung doors. These sold well in the 1950s, boom years for US home building. He also worked as a tennis instructor and ski instructor – these were both sports at which he excelled. Ski instruction was almost his downfall, though.

In 1952, the passenger train City of San Francisco became snowbound for six days in the Yuba Pass, not far from where the Donner Party had been stranded a little over a century before. This time, death from cold, starvation, and cannibalism did not happen, partly due to the efforts of one Dennis Whiles, ski instructor and cross-country skiing expert. He led a team in with food and emergency supplies – and then hightailed it out of the area before the news media arrived and found out he'd learned his cross-country skills training the Wehrmacht for the Eastern Front.

Meanwhile, the FBI kept searching. They'd interviewed everyone he knew in Germany, but Gärtner never let anyone know he was alive, let alone where he was. His parents died in the early 1960s without ever knowing whether their son had survived the war. FBI agents studied telephone books in every major metropolitan area, looking for variants on the name 'Gärtner', and even annoyed several innocent German Americans in Pittsburgh. At the same time, Dennis Whiles, tennis pro, rubbed racquets with television stars like Robert Stack1.

In 1953, Reinhold Pabel, one of the six remaining fugitive German POWs, was captured in Chicago. This was no doubt an accomplishment for the FBI; it had only taken them eight years and countless man-hours to find the bookshop owner hiding in plain sight. Interviews with Pabel ran in all the newspapers – along with photos of the remaining escapees. Gärtner was worried, with reason: the publicity caused three of the others to be caught. One was recognised by his future mother-in-law. In 1964, the last fugitive but one turned himself in. He was tired of looking over his shoulder. That left Georg Gärtner, who was unaware of his unique status as the last German on the run.

How the Publicity Machine Solved the Problem

On Wednesday, nearly 40 years to the day since his escape from Camp Deming in New Mexico, Georg Gaertner, the last-known German prisoner of war in the United States, gave himself up to American authorities, ending four decades of life on the run.
- Bryant Gumbel, on the Today Show, 1985

Dennis Whiles married in the 1960s, and became a stepdad. He and his wife Jean ran a tennis pro shop for a while, with success. They organised tennis tournaments. Dennis invented an aluminum tennis racquet – the 'Dennis Racquet' – but had no success in marketing it. Jean also worked as a social worker. When the kids were grown up, the couple moved to Hawaii.

Life should have been good, but Dennis' inconsistent and secretive behaviour was driving Jean crazy. He wouldn't talk about his past. The alleged details of his early life didn't add up. Worse, he'd turned down lucrative job offers and dream vacations because they involved foreign travel. The man was terrified to apply for a passport.

Finally, she'd had enough. 'If you don't tell me what's going on, I'm leaving,' she said, and meant it. Jean's bags were packed, and the taxi waiting at the door, when her husband finally broke down and told her the truth he had kept to himself for 40 years. Jean took this in, and then went to work.

She located a historian named Arthur Krammer, who had written extensively about the story of the German POWs. She forced a reluctant Dennis to make the call – which he did, from a telephone booth. Krammer listened to the tale and said: 'Mr Gärtner, glad to meet you.' The bemused scholar agreed to write up the story in an 'as told to' book. The aim was to win public sympathy and keep the fugitive from jail or deportation. It worked. Krammer wrote the book, and the publishing company's PR department did the rest.

They published the book. An enterprising editor gave it the provocative title Hitler's Last Soldier in America. (Hitler sells.) Someone else came up with the brilliant idea of having the now 65-year-old tennis pro 'surrender' to host Bryant Gumbel on the Today Show, live on your television set. The FBI gave up: they didn't know what to charge Gärtner with. So they let him stay. In 2009, he became a US citizen.

Gärtner contacted his last remaining relative, his sister Lotte, and went to visit her in Germany. He stayed so long (two years) that Jean divorced him, though the couple remained good friends. According to Arthur Krammer, in later years Gärtner had trouble sorting out his identity. He'd spent most of his life being two people. He died in 2013. The cemetery plaque gives both names: Georg and Dennis.

What Does It All Mean? Your Results May Vary

We have always held prisoners in wartime, even ones who have escaped to fulfill their dream of inventing the aluminum tennis racket.
- Rachel Maddow, 'The Rachel Maddow Show' for Thursday, January 3rd, 2013

Whether the story of Georg Gärtner provides food for thought on the subject of immigration, asylum, Vergangenheitsbewätigung2, or prisoners of war is left up to the reader. If you are interested in learning more of the story from Georg Gärtner's point of view, we recommend reading Hitler's Last Soldier in America by Georg Gärtner and Arthur Krammer, 1985. (It's available through the Open Library, or you can buy it online, check your Internet store.)

If you'd like to know what news commentator Rachel Maddow thinks, she'll tell you at length. Just read the transcript of her 2013 show for a rambling analysis.

Would you like to see some film of German POW life and work in US camps? [PROPAGANDA ALERT] The army shot some raw footage that you can see on Youtube.

Image courtesy of the Library of Congress.

1Robert Stack played Elliot Ness in The Untouchables, a 1950s noir series about the early days of the FBI. He was also an occasional doubles partner of Dennis Whiles.2A German word meaning 'dealing with the past' that specifically refers to historical questions involving the Hitler era.