Louise and Ida Cook: Opera Fans to the Rescue in Nazi Germany Content from the guide to life, the universe and everything 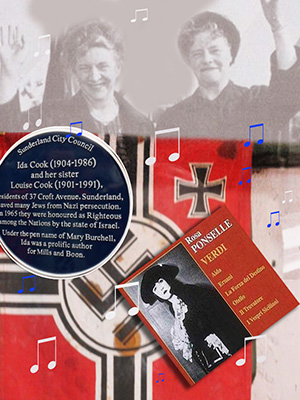 Shamgar1 had an ox-goad,
David had a sling,
Dorcas2 had a needle,
Rahab3 had a string,
Samson4 had a jawbone...
– Old Sunday School Song

Schindler had a factory. Rabe had a flag. Corrie ten Boom had an old house. Kurt Gerstein had an SS uniform, and Hirsh Glik had a song. Like those unlikely heroes in the ancient texts, they did remarkable things with what they had.

Louise (1901-1991) and Ida Cook (1904-1986) had... opera fandom. And some money from the romance novels Ida wrote. Believe it or not, those two things turned out to be a tool for the rescue of human beings from the Holocaust. You can read about it in Ida's book Safe Passage, published by Harlequin in 1976. It's not surprising that the Toronto-based paperback company brought out this updated version of Ida Cook's 1950 memoir: in 1971, Harlequin purchased Mills and Boon, the British publishing house for which Ida wrote 112 romance novels5. Before Ida made any money from her books, she and her sister Louise eked out a £3-a-week existence as clerk-typists. Afterwards, their lives became rather more exciting, as they would have said.

Fangirls: The Secret Weapon of Nerdiness

After all, we're not a bit the James Bond type. We come from a very respectable civil-service family.
– Ida Cook, Safe Passage, p 187

Back in 1923 London, Ida's sister Louise came home from a (free) lecture with the startling announcement that they must buy a gramophone. Once they'd managed to purchase one at the steep price of £23, the heavens opened. They'd discovered opera in all its tinny glory. Soon they were attending concerts and queuing in long lines for the cheap seats during the Covent Garden season. Sociable young women in their early 20s, Ida and Louise made fast friends among like-minded young opera fans. They could argue endlessly about the relative merits of this coloratura or that mezzo voce. They collected records and had listening parties. When double-sided records came out, they were over the moon.

Their all-time favourite soprano was Amelita Galli-Curci. Ida and Louise came up with a daring project: to travel to New York City to see Galli-Curci perform live at the Met. It took them two years of scrimping and saving (and cutting down on lunches) to raise the money, but off they went on a steamship. It was their first big adventure. They'd written fan letters to Galli-Curci, and she'd graciously got them tickets to all the performances, which they attended in their homemade dresses. Writing these travels up for newspapers in New York and their hometown of London gave Ida her first writing experience.

This bold adventure by two star-struck opera fans had far-reaching effects: their first opera friendship, with Galli-Curci6, led to networking. With another trip to New York (which required another two years of saving) and numerous jaunts to the European continent, the ladies formed quite a wide acquaintanceship among the opera elite of many nations. One of their best friends was Ezio Pinza, the talented and ebullient Italian bass. Another couple they knew well were Austrian conductor Clemens Krauss and his wife, Romanian soprano Viorica Ursuleac.

The opera singers naturally appreciated the adulation and occasional hospitality of these devoted non-musician fans. Life on the road can be lonely and tiresome. The Cooks, in turn, idolised these singers, and worried over their health and spirits lest their magnificent vocal instruments become damaged. Travelling around and listening to opera was a passion with Ida and Louise. Like any true fans, they eked out the time between performances with gramophone parties and intense discussions with fellow enthusiasts7. In their travels, though, they made a lot of friends. This led to an unexpected new challenge: rescuing some of these friends from the Nazis.

It all started when Viriaca Ursuleac asked them to 'look after' her friend Mitia Mayer-Lismann, who was an expert and lecturer on opera. Ms Mayer-Lismann and her family needed help: they were Jewish, and life in Frankfurt was getting very uncomfortable. Helping the Mayer-Lismanns opened a new field of activity for the Cook sisters: that of rescue workers. Fortunately, they had their opera-fan network and some disposable income to rely on.

The Cost of Escape

Already, the dreadful fungus that was to flower in the centre of Europe was beginning to swell and give out a faint, sickly, premonitory aroma of evil.
– Ida Cook, Safe Passage, p 96

By the mid-1930s it was obvious to many German Jews that they were in danger. Getting out, however, was less easy than would first appear. They needed visas for the places they wanted to resettle in. For that, they needed to prove that they had a means of support in the new countries. Unfortunately, the Nazi government wouldn't let them take their money or possessions with them. They were going to be thrown on foreign shores with little or nothing to their name. This is where the help of people like Louise and Ida came in handy.

Using their network of friends and acquaintances, the Cooks helped arrange 'guarantors' – people who would guarantee support for up to three years for the immigrants. They also helped guide their friends through the maze of bureaucracies that issued travel papers. Often, it was a matter of convincing these bureaucracies that Professor So-and-So would be able to find work as a groom, or Mrs X, now 60, could be a housemaid in spite of her documented arthritis. It was a tricky business, often involving creative fiction.

Beyond that, the Cooks helped the refugees smuggle out valuables which they could sell to pay their way. This was the dangerous part: crossing the border wearing expensive furs and a lot of fancy jewellery was a dodgy undertaking. Ida, wearing a diamond brooch over her homemade dress, sold the idea that this gaudy bauble actually came from Woolworth's. It helped that they always carried proof that they were coming from a concert gala: Clemens Krauss organised performances in the towns the Cooks needed to visit in order to pick up valuables. Nazi authorities shook their heads over the crazy opera fans, but let them pass – and another family had their starting capital for a new life.

For four years, the Cooks lived in an exhausting world of intrigue. They were sometimes unaware of the dangers they ran. They usually stayed in the best hotels, because they thought it would allay suspicion. Wearing their illicit diamonds and furs, they'd gawk at Nazi bigwigs in the lobby of the Hotel Adlon in Berlin. They 'knew Hitler from the back', and Foreign Minister Ribbentrop once gave Louise the 'glad eye'. At the same time, they were meeting a refugee contact on a nearby street corner. This man later confessed to being part of the anti-Hitler underground. Ida didn't find out for a long time.

We were stunned. And intrigued beyond measure. All those years ago, we'd been heroines, without the pain of knowing it!
– Ida Cook, Safe Passage, p 186

They couldn't save everybody. There were heart-breaking failures when they learned that this or that acquaintance had been arrested, or died, or committed suicide in despair. The waiting lists for their allied rescue groups grew into the tens of thousands. And then it was 1939. The rescuing was over. It was time for the Cooks to go home and get ready for the Blitz.

'The Unconquered Heart of Britain'

As I waited, I realized that, in the hurry and muddle of the moment, my line had not been isolated. From every side, there rushed in upon me voices speaking in a variety of languages. They all sounded agitated, of course, and simply registered as a jumble of sound. It was as though I were listening in to a mad and terrified Europe.
– Ida Cook, Safe Passage, p 187

From the jumble of voices on a party line needing rescue, Ida's attention turned to the voices in her London neighbourhood. She became a night watch volunteer in a bomb shelter. Her 75-year-old father became a stretcher bearer, while her mother kept the home fires burning. Her brothers went to war, and Louise, a civil servant, was evacuated to 'a remote part of Wales'.

There wasn't a lot of time for opera. Instead, the British refugees from the bombing sang cheerful songs to drown out the whine of engines. Once, a well-known contralto – Ida doesn't name her, '[s]he had never been a favourite of mine' – came to the shelter and won everyone's praise by leading the singalong. Ida's family house was damaged in the bombing, but fortunately, no one was home. Ida describes the war with typical understatement as 'boring, horrid, frustrating'. Finally, the long struggle was over. There was dancing in the streets.

For Ida, Louise, and their opera-fan friends, though, the real sign of post-war peace came over the telephone. One of Ida and Louise's all-time favourite singers was Rosa Ponselle. Throughout the hardship years, they'd look at one another and say, 'There's always Rosa!' Now, in 1945, they could finally get in touch with their idol again. They gathered all their opera-lover friends at their house, scraped together some party grub saved from ration coupons, and put in a ten-minute telephone call to Rosa Ponselle in the United States.

I called them around. We sat, knelt or stood as near to the telephone as we could, and held up the receiver. There was a moment's silence. And then – in miniature, but clear, matchless – her tremendous, characteristic entry to the 'Pace, pace', from the fourth act of the Forza del Destino crossed the years and the ocean... We nearly went crazy.
– Ida Cook, Safe Passage, p 245

Louise and Ida went back to appreciating opera. Ida continued doing what she did best: writing romance novels, many of which are still in print and still pleasing audiences. In all, they helped rescue 29 families. They are listed by Yad Vashem8 as Righteous Among the Nations. They did not consider themselves to be heroes. They felt that what they'd done was 'the right thing to do.' And they did it for love of opera. Never underestimate the power of a passionate hobby.

1Judges 3:31.2Acts 9:36-42.3Joshua 2.4Judges 13-16.5Warning: Mary Burchell novels are not salacious. Do not expect Fifty Shades of Grey. These novels were written by a respectable English spinster who happened to really, really love opera.6It was the fashion in the pre-war era to refer to all opera singers by their last names only. It gave them a sort of grand star quality (think 'Madonna').7Think Deadheads (followers of the Grateful Dead) who know what a cadenza is.8The memorial organisation in Israel.