Zog Nit Keynmol - The Story of a Song Content from the guide to life, the universe and everything 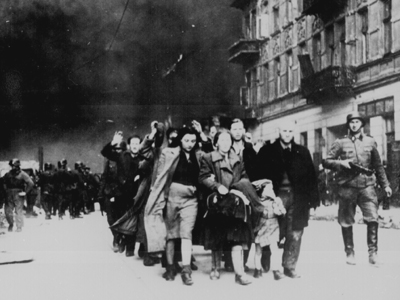 Why learn foreign languages? Perhaps so that we can share with one another the words we use for 'hope'. Why sing songs in a foreign language? Possibly for the same reason. If we learn the song, syllable by syllable, even if we don't understand every word, we can participate in the spirit that informed the actions of the people who sang it first.

In the case of the song we're about to learn – the Partizaner Lid, also known as Zog Nit Keynmol   – singing the song will link us to a lot of people we've heard about, but never been privileged to meet. People like the partisans of the Vilnius and Warsaw ghettos. People like the African American activist Paul Robeson.

Hirsh Glik (1920-1944) was born in Vilnius, Lithuania. Even before the Holocaust, Glik lived a life of grinding poverty. He did factory and shop work to help support his family, while meeting with other poets and writers in his free time. A native speaker of Yiddish who no doubt knew Lithuanian, Polish, and Russian, he began writing poetry in Hebrew at the age of 13. The revival of Hebrew as a spoken language, rather than one reserved for scholarly and liturgical use, was underway around the world, from Palestine itself to Jewish population centres as disparate as Milwaukee, Wisconsin, where future Israeli Prime Minister Golda Meir grew up, and Old World enclaves such as Vilnius1 and Czernowitz.

In 1941, the Germans occupied Lithuania. Glik was sent to work in the peat bogs at Biala-Waka. He worked. He kept writing. His friends said that if you hummed a tune for him, he'd make up words. He wanted people to be able to sing his poems.

In 1943, the Germans closed the Biala-Waka peat camp and moved the workers. Glik ended up in the Vilnius ghetto. There, he did two important things: he joined a partisan group, and he wrote a song that has become famous throughout the world, the Partizaner Lid, which was sung in Vilnius and by the fighters in the Warsaw Ghetto Uprising. Later, Glik and his fellow partisans were captured and sent to a camp in Estonia. From there, Glik escaped into the woods, fighting the Nazis until he was killed in 1944.

The Partizaner Lid is militant. It's a marching song, the tune a Russian melody by the Jewish brothers Dmitri and Daniel Pokras2. Why is the song so effective? Read the lyrics. See if you can tell.

Click here to hear the song sung. You can choose from nine different versions.

Paul Robeson Sings in Spite of Stalin and the HUAC

Paul Leroy Robeson (1898-1976) was the son of a minister. His father had been born into slavery. A superb athlete, Robeson attended Rutgers College, graduated from law school, and became the first black actor to perform Shakespeare's Othello on Broadway. He was known worldwide for his beautiful baritone voice. An outspoken socialist, Robeson was persecuted by the FBI, the CIA, and the House Un-American Activities Committee.

In 1949, Robeson travelled to the Soviet Union. As part of the 150th birthday celebrations for Russian poet Alexander Pushkin5, Robeson gave a concert at Tchaikovsky Hall in Moscow. Unhappy at the Soviet persecution of many of his Jewish friends, including the poet Itzhak Feffer, Robeson paid tribute to the partisan fighters of the ghettos by performing Zog Nit Keynmol.

Robeson addressed the Moscow audience in Russian, explaining its origin and translating the lyrics. Then he sang the song in Yiddish. The ovation that followed his performance was prolonged and overwhelming. Russians and Russian Jews alike were deeply moved – considering Zog Nit Keynmol a tribute not only to the victims of the Holocaust, but to those who were suffering under Stalin's dictatorship. Soviet censors removed Robeson's remarks from the official recording of the event.

What was clear to Robeson's Soviet audience – that the singer was for human rights and certainly no supporter of Stalin – seems to have escaped the Red-Baiters of America. Back home, Robeson was investigated by the House Un-American Activities Committee. What could be more un-American than singing folk songs in Moscow? Eventually, Robeson's passport was revoked.

Russians may have wept with joy when Robeson sang, but in Peekskill, New York, in 1949, locals exhibited quite a different reaction. The riot that followed Robeson's concert caused property damage and injuries to 140 people. Civil rights activist and folk singer Pete Seeger attended with his young family and his friend Woody Guthrie. Their car window was smashed as rioters attacked concertgoers and chanted racist and antisemitic epithets, urging the attendees to 'go back to Russia'. Howard Fast, the author of Spartacus, joined others in a line of resistance to the violence, singing 'We Shall Not Be Moved'. Afterwards, Seeger kept the rocks that were thrown at them as a souvenir, and used them to build a chimney in his cabin.

Why did Hirsch Glik write Zog Nit Keynmol? To give courage to a people with their backs against the wall, people the world seemed all too willing to forget. Why did Robeson sing the song? To show his solidarity with his Russian and Russian Jewish friends, intellectuals threatened with imprisonment or death by the Soviets. To sing it, Robeson had to learn it, as he did so many songs from around the world, in a foreign language. By singing Zog Nit Keynmol, Robeson not only acknowledged the struggle of the individual against tyranny, but reached beyond his own personal difficulties to share in the efforts of others.

Why do people in Israel sing Zog Nit Keynmol   – which they do, often in Hebrew or Russian? They sing it, especially on memorial days, to remember those who died in the Holocaust. It is also a way to say 'Never again'. You can hear several versions here, and read the lyrics in Hebrew, Yiddish, and Russian.

Why do we sing Zog Nit Keynmol today? To make sure that no one ever forgets what racism and war can do to humanity. To deepen our own understanding and honour the past. Finally, we sing the song to remind ourselves that even when it was difficult, there were those who never gave up.

Zog nit keynmol, az du geyst dem letsn veg…whether you're faced with Hitler, Stalin, or the HUAC. Never give up, the song is saying. Vi a parol zol geyn dos lid fun dor tsu dor…pass the word down the generations.

1Before the war, Vilnius was known as the 'Jerusalem of Lithuania' for its scholarly life, and the number of synagogues and yeshivot (rabbinical schools).2The Pokras brothers later revealed that they had based their socialist marching song on the old Yiddish tune Oyfn Pripetchik.3In transliteration. Yiddish is written using the Hebrew alphabet, and is read from right to left.4Author's translation.5It might be interesting to note that Pushkin, one of Russia's most famous poets, had an African great-grandfather.