What was so Great about Fifty Shades of Grey? Content from the guide to life, the universe and everything 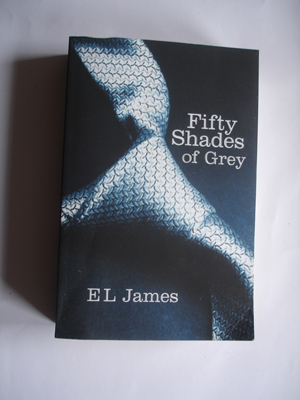 This surely makes the most important question, 'why?'

Originally begun as a piece of fan-fiction based on the ever-popular Twilight series2, Fifty Shades of Grey tells the story of a virginal young college student, Ana Steele, and her relationship with billionaire Christian Grey, a man who likes his sexual partners contractually and actually bound, and whose unpleasant childhood clearly left him with a hankering to play with toys. The result, once they get down to it some 100 odd pages in, is a series of set piece sex scenes featuring among other things, music, feathers, riding crops, harnesses, blindfolds, some intimately placed balls, a tampon and a belt. It ends badly; after much vacillation over whether she can accept the submissive role that comes with the man, Ana leaves him, finally deciding that the lifestyle is not for her. But fear not, the existence of two almost equally popular sequels, Fifty Shades Darker and Fifty Shades Freed, give us hope that all will be resolved satisfactorily, or at least, energetically.

So Why is it So Popular? Is it the Sex?

Is It Unique In That?

The answer is, of course not. And certainly not any more, what with every publisher and his writer trying to cash in on the success of Fifty Shades. However, while these books are now a ubiquitous sight in every book emporium, Shades itself was initially offered as a print-on-request e-book by a tiny Australian publisher, yet reached the finals of the 2011 Goodreads Best Romance Category5on word of mouth alone. One theory is that the book hit the virtual shelves at just the right moment to capitalise on everybody realising that with an e-book, you don't have to display your low taste to an actual live person at the checkout, and even more crucially, when you are reading, it is not immediately obvious to other people what your book is about. Certainly, and in stark contrast to most romance titles, erotic or otherwise, the mass market paperback version is also clothed in a restrained and enigmatic cover6. Which would work better for those still boldly reading a copy, while commuting to work on the underground, if the book had not become a household name.

Alternatively, discussion has centred around the appeal of the fantasy of a dominant man for the modern liberated woman looking to escape for a while the burden of having to look after herself. Or the fact that daydreaming about ravishment gives better orgasms. Or the vicarious buzz of being with a man who is constantly urging you to eat. The key word here is 'fantasy'. Fifty Shades of Grey caters to any number of them, both inside and outside the bedroom.

Is It Peer Pressure?

Oh, probably. There is a point when everybody is talking about it, Twitter is crashed by it, your blog feed is full of it, and the newspapers are wallowing in it. You are stuck next to the display stand while waiting for your toddler to finish deciding which colouring book he wants and Shades only costs £3 so you think, 'oh go on then'7. And the thing is, once you do succumb, it does mean that you can spend many happy minutes having water cooler moments with practically everybody else on the planet. Or at least, the female half. Everybody has an opinion, after all.

The Writing Must Be Something Else Too, Though, Right? I Mean, Millions Of Copies Sold?

Certainly is. It is generally accepted that despite having no literary pretensions whatsoever, Fifty Shades of Grey is an appallingly written book. But this doesn't completely detract from its charm, as even if you are yawning over the sex scenes or wondering how long it is until the next one, much amusement can be had in lines like 'Argh!' I cry as I feel a weird piercing sensation deep inside me as he rips through my virginity8, His voice is warm and husky like dark melted chocolate fudge caramel… or something9, I must be the colour of the communist manifesto10 and I steal into the bathroom, bewildered by my lack of underwear11. In fact, some of the best fun to be had from Shades is reading some of the horrified reviews heaped upon it from all directions. Or wondering who will win the inevitable cat fight between Ana's puritanical subconscious (82 irritating mentions) and her more lascivious inner goddess (58 equally annoying mentions)12.

But It's Just Harmless Fun, Of Course

This is also a matter of debate. Aside from the worry that its success is further evidence of a universal cultural dumbing down, there is the question of how damaging is the mass acceptance of this particular romantic lead. Grey wants to control every aspect of his Ana's life, from what she eats, through how she manages birth control and how she spends her free time, even to whom she talks. He expects never to be contradicted and physically attacks her if she deviates from his rules. In Shades of Grey, it's not the sex that's abusive, the argument runs, it's everything else about the relationship. This view is probably based in part on a misunderstanding of, and certainly a lack of sympathy with, what different types of Dominance/submission relationships might involve. But this does not completely absolve the book. There is every evidence that EL James has done her BDSM homework - the interminable contract readers have to wade through which sets out the limits of what Grey expects to be able to do, but which, crucially, requires Ana's consent, is interesting in its own way. It is certainly not something any sane author would usually dump into the middle of a narrative, were it not solidly based on real life13. However, the problem is in the application. Christian's preferences have been brought about by abuse as a child and teen and, as such, becomes a perversion rather than a valid lifestyle choice. The happy ending looming over the series, where the damaged man is cured by the love of a good woman, then, leans heavily on the side of perpetuating the myth that if a domestic abuse sufferer hangs in there, her abuser will eventually change.

I Don't Care What You Think, I Love It!

Well good. There is plenty for you to look forward to. The next issue of Fifty Shades of Grey - The Magazine the launch of the Fifty Shades inspired lingerie line, the forthcoming movie, and the rumoured fourth instalment of the tale.

179, apparently.2The novels and now also films about a young girl and her 104 year old vampire boyfriend who struggles with his desire to drink her blood.3The term 'mummy porn' has recently been added to the Collins Dictionary.4Upmarket department store in London.5Check out the covers while you are there.6Did you click on the Goodreads link earlier? If not, do so now. The covers, yeah?7This bears absolutely no relation to any real life situation, of course. Nope, none.8With his penis, in case anyone is wondering. Vanilla sex, donchaknow.9No need to be too specific.10To be fair, Ana blushes a lot. It must have been hard to keep finding novel ways to express that.11My personal favourite.12I am indebted to Katrina Lumsden's Goodreads review for the statistics.13It's like reading the legal transcript of a two-year planning application, in real time. - Victoria Coren, The Observer.