'Down Among the Z Men' - the Film Content from the guide to life, the universe and everything 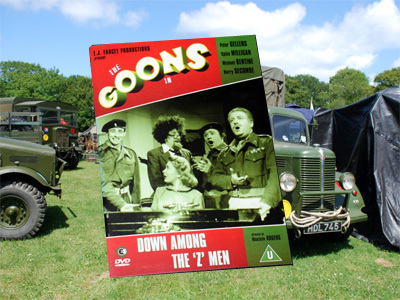 Down Among the Z Men is a 1952 comedy film. Filmed quickly in two weeks, it is the only full-length film starring all four members of the phenomenally popular and revolutionary radio comedy series The Goon Show - the only one to include Michael Bentine who left The Goon Show after they became famous - but is the second full-length film that the Goons made, after the previous year's Penny Points to Paradise. Like many of the Goons' early attempts to convert The Goon Show's audio success to visual media such as film or television, it is considered to be a failure.

250 episodes of The Goon Show were broadcast between 1951 and 1960, with two specials in 1970, but only 160 survive, predominantly from series five (1954-5) onwards. Before that the show was either broadcast live or, if recordings were made, they were not kept1. This 1952 film is therefore a rare recording of The Goons at a time when almost none of their work survives except in script form.

The name is a play on the title of a traditional song about drunken unconsciousness, 'Down Among the Dead Men'. The term 'Z Men'2 refers to the Class Z Reserve, former soldiers who had been in the army between 1939 and 1948 and had returned to civilian life, but if under 45 years of age could be recalled to serve their country in an emergency.

Absent-minded atomic scientist Professor Pureheart, inventor of the laughing teargas bomb, has discovered a revolutionary top-secret formula, which he wrote down somewhere he has forgotten. Harry Jones, an incompetent grocer's assistant obsessed with detectives, is determined to solve the case of the missing formula but is led to believe, by the black-hatted baddies, that Pureheart is a villain. He follows Pureheart to an army barracks commanded by Colonel Bloodnok, who has instructions to keep Pureheart safe. In the barracks Jones is mistaken for one of the contingent of newly-arrived Z Men being trained there and he is put in the same squad as Private Eccles. Meanwhile MI5 agent Carole Gayley has arrived to help Bloodnok and Pureheart find the formula, pretending to be Bloodnok's daughter to avoid arousing the suspicions of the men.

Who will get the formula first? Will the baddies triumph over the incompetent forces of good? Who will perform in the barracks variety show, which the villains hope to use as a distraction that will allow them to infiltrate the base, steal the formula and kill the professor? Will the heroes be able to foil this scheme between their performances on stage? Can Private Eccles be demoted even further? Will our heroes laugh and cry and survive the effects of the laughing teargas bomb?

Characters and actors in Bold were in The Goon Show.

The main cast were from the Goon Show, yet only three Goon characters appear. Harry Secombe plays Harry Jones, rather than his usual Goon character of Ned Seagoon. Michael Bentine plays Professor Osric Pureheart, the central character of the first series of The Goon Show. Sadly almost all episodes of The Goon Show featuring Michael Bentine no longer exist; he left following creative differences with Spike Milligan3, who plays Private Eccles, and to spend more time with his family. Eccles is perhaps the most famous Goon Show character. Peter Sellers, who would go on to have the greatest acting success4, plays the comparatively minor role of Colonel Bloodnok (greatly toned-down and straightly-played compared to his Goon Show character, Major Bloodnok).

'Forces Sweetheart' Carole Carr was best known for being the first singer to appear on the BBC when services resumed after the Second World War. She performs a couple of numbers in the film and would later appear in 1952's Christmas pantomime  Goon Show episode, 'Robin Hood'. Her other film credit was showing off her collection of model aircraft in a British-Pathé newsreel.

Actor and comedian Graham Stark served in the army alongside Peter Sellers and was his best man at his weddings. He appeared in many of Sellers' films, including seven Pink Panther films. He later played many of Spike Milligan's Goon Show characters on radio during Milligan's periods of illness, and was one of many actors to fill in for Peter Sellers when he was ill. Andrew Timothy, who plays Captain Evans, was the original announcer for The Goon Show before leaving in Series 4 and being replaced by Wallace Greenslade. The other roles were played by actors who failed to find fame.

The Goon Show throughout its run had musical interludes. To simulate this on the big screen, dance troupe Leslie Roberts' Twelve Toppers appear. They initially perform an exercise routine and later dance on stage in the barracks' variety show.

Sadly the film is very much less than the sum of its parts. Like many a British war film it involves a group of incompetent recruits joining the army. This plot would prove highly successful for Carry On Sergeant (1958), but this film lacks that film's character interplay. Instead it bumbles around with a plot about a missing formula5 that is vital to the defence of the realm and cannot be allowed to fall into enemy hands.

On radio, The Goon Show was able to flourish with surreal humour and the ability to explore any conceivable location. A radio show can effortlessly time-travel into the past or be set in an exotic location, on the moon or under the sea. The main weakness of the film is that it can't feature the same freedom, instead being set in a shop, in a field and around an army barracks. On radio the performers can also play a wide variety of roles simultaneously. Due to the microscopic budget and very tight timetable for production, the film does not attempt to have the same actor play more than one role, even though it had previously been done on screen to great effect, particularly by Laurel and Hardy. This means that the film doesn't show the Goon's strong point: their versatility. Many of the Goons' best characters, such as Bluebottle, Hercules Grytpype-Thynne, Count Jim Moriarty, Minnie Bannister and Henry Crun, either do not appear or had yet to be created.

The variety show does allow some of the characters a moment to shine. Peter Sellers playing Colonel Bloodnok does impressions on stage, effortlessly demonstrating his ability to instantly change character. Michael Bentine as Professor Pureheart also performs his legendary broken chairback routine.

Unlike the radio show, which was predominantly written by Spike Milligan, the film was written by Jimmy Grafton and Francis Charles. This was Jimmy Grafton's only film script, although he was an honorary Goon6, being the landlord of the Grafton Arms' pub in Victoria, London, where the Goons spent their spare time – in Spike's case, most of his time as he lived in the pub's attic - and was where Michael first met Peter and Spike and where Harry met Peter. The way they were able to entertain his customers persuaded Grafton to arrange an audition for them at the BBC. He was the script editor on the first three series of The Goon Show and, as Harry Secombe's agent, later wrote for many of Secombe's solo shows. It is Francis Charles' only known writing credit.

The Goons would continue to attempt to bring their world view into view in subsequent years. An award-winning ITV television comedy series, A Show Called Fred, which sadly no longer exists, was broadcast in 1956 starring Spike Milligan and Peter Sellers and directed by Richard Lester. There was also a puppet series, The Telegoons (1963-4).

Perhaps the most notable attempt was avant-garde Oscar-nominated short film The Running Jumping & Standing Still Film (1959), which featured Peter Sellers, Spike Milligan, Graham Stark, and David Lodge and was directed by Richard Lester; this so impressed The Beatles that they hired Lester to direct their first films, A Hard Day's Night (1964) and Help! (1965). Peter Sellers himself said:

With the right set-up, I think the Goons on film could be startlingly successful, provided that an unconventional technique were used. Certain characters, for example Bluebottle, could not be convincingly humanised, so a form of cartoon on film... might be employed... the result might well be a new form of film comedy with an international appeal.

Spike Milligan would later create the highly-influential Q series (1969-1980/19827) for television, which was a major influence on Monty Python's Flying Circus (1969-1974). Strangely, possibly the closest that The Goon Show came to successfully transferring onto screen was this fan film by Prince Charles.

1Recording technology was in its infancy – audio tape did not exist when the show started, only acetate discs that needed to be converted into a master disc as they wore out quickly when played.2'Z' is pronounced the British way of 'Zed', not the American way of 'Zee'.3Bentine later described this by saying, 'I was always a breakaway Goon with an urge to apply my logical nonsense as opposed to their nonsensical logic'.4Sellers' acting ability was best demonstrated when he was offered the chance to play a minor role of a policeman, billed fifth after David Niven, Robert Wagner, Capucine and Claudia Cardinale, in a film directed by Blake Edwards. Peter Ustinov had already turned the part down because it was too insubstantial but Sellers, without changing a word of dialogue, made Clouseau the star of The Pink Panther (1964).5X Y RU1.6He was nicknamed KOGVOS, standing for King of Goons & Voice of Sanity, and various similar variations.7Q9 ended in 1980, Spike's later television series There's A Lot of It About (1982) is often unofficially considered part of Q.