Titan - Saturn's Largest Moon Content from the guide to life, the universe and everything 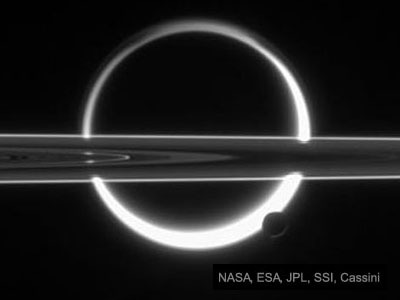 Titan is Saturn's largest moon and the second-largest moon in the Solar System, beaten by a small margin by Jupiter's moon Ganymede. It was discovered on 25 March, 1655, by Dutch astronomer Christiaan Huygens, who had been inspired by Galileo Galilei. Although Titan is even more massive than Mercury, it's still not classified as a planet because it orbits Saturn rather than the Sun. Titan is tidally locked with Saturn, meaning that the same side of the moon is always facing the planet. If you were on Titan's surface, this would mean that Saturn would always appear to be in the same position in the sky.

It turns out that despite being a moon, Titan actually has a decent atmosphere (although not one you would want to breathe in). It's the only moon that has been discovered to have an atmosphere, making it unique in the Solar System. The atmosphere is denser than most planets' and has a hazy, smog-like appearance.

Titan has been theorised to have a crust made primarily of ice, with a huge underground ocean of extremely salty water lying several kilometres beneath the surface, where the temperature is warm enough that the ice melts. You can kind of view this underground ocean as the equivalent of Earth's mantle. Much like how Earth has a crust of rock over a huge ocean of liquid rock (magma), Titan has a crust of solid water (ice) over a huge ocean of liquid water. Titan's underground ocean has been speculated to be hundreds of kilometres deep - in comparison, the deepest place on Earth, the Mariana Trench, is only around 11 km in depth.

Beneath this ocean is probably more ice, but of the sort that sinks and only forms through high pressure. Then comes the core, which makes up most of Titan's mass and is made of silicates.

Though most of Titan's surface is covered in hydrocarbons that obscure the water ice beneath, there are some good chunks of Titan where that bedrock of water ice lies exposed, forming an 'ice corridor' that wraps around 40% of the moon's circumference.

Titan has oceans, clouds, rain, lakes, rivers, storms and seasons - the only body in the Solar System to have liquid on its surface besides Earth. The main difference is that Titan's lakes and oceans are all made out of liquid ethane and methane instead of water. Methane comprises 2% of Titan's atmosphere, the other 98% being made out of nitrogen, so it makes sense that methane would be one of the main liquids on this moon. It's also cold enough on Titan that the methane often freezes solid, or sometimes snows from the sky.

The Perfect Place for a Future Colony?

Given everything that was previously said, it sounds a little ridiculous to want to live on Titan, a bit like saying that you want to live in a dry-ice freezer. And sure, technically Titan has no breathable atmosphere and a temperature of -179.2°C, which would probably be a bit of a drag to deal with. It also gets around 1% of the sunlight Earth does, so even the seven-year-long summers there will still be really gloomy.

On the bright side, you won't have to wear a pressure suit, courtesy of Titan's atmosphere. This is one of the reasons why Titan is technically considered one of the 'easier' places outside Earth for humans to live (even on Mars, the other 'easy planet to live on', you would still need a pressure suit and have to live in pressurised buildings).

There's another serious benefit to Titan's atmosphere - protection from galactic cosmic rays, which are radiation particles that originate from distant supernovae. Scientists recently found out that not only are these particles potentially carcinogenic in the long term, but they also cause brain damage in the short term, too. Any future Mars colony would need to be completely underground for this reason (in which case the question one must ask is... why not just live underground on Earth?)

On a more exciting note:

You Could Probably fly on Titan

It turns out that Titan has a dense enough atmosphere and low enough gravity that if you strapped on a pair of wings, you would be able to fly around to your heart's content.

So what exactly is it about Titan that makes it capable of bringing your flying dreams to life? Well, it's a combination of the dense atmosphere and the low gravity. Titan is about one and a half times the size of our moon and has only 14% of Earth's gravity, so even just jumping up and down would be quite the experience. Add to that a dense atmosphere, and you'll only need to flap some wings to achieve flight.

Also, it's worth noting that though Titan's gravity is low, the escape velocity is a reasonable 2.5 km/s, making it improbable that flying will send you out of orbit (unlike on Deimos, one of Mars' moons, where the ridiculously low escape velocity of 5.5 m/s means a decent sprint along the surface could theoretically launch you into space). This is good because after take-off you'll probably be going at fairly high speeds, and you don't want your flight to end with you being tragically lost to the void.

Not so Fast (or not Fast Enough?)

There are a few caveats about flying on Titan, as some University of Leicester students found out. First of all, you can't just flap your arms and achieve lift-off that way. If you thought 'that's okay, I'll just bring a wingsuit', then be prepared to run 11 m/s to make it off the ground. If you're an Olympic medallist, you might be able to pull this off. For the rest of us ordinary folk, we'll have to bring wings with the surface area of at least 4.7 sq m (about three times larger than the ordinary wingsuit) in order to achieve lift-off at the average running speed of six m/s. It may be a bit ungainly, but undoubtedly worth it.

Even if we do eventually send a bunch of people to live out their flying dreams on Titan, it's possible we won't be the first ones there. Given Titan's strangely Earth-like conditions and the presence of methane (which is associated with life, though it can technically also form inorganically), scientists think there could already be life on the moon. Some scientists have theorised that there might even be two different kinds of organisms: one water-based, residing in the speculated underground ocean of saltwater beneath Titan's crust, and a methane-based type on the surface.

Other scientists say that it's more probable that life will be found within cryovolcanoes (similar to volcanoes on Earth, except that they primarily spew water rather than lava), or recent asteroid crash sites, which are some of the few areas on Titan's surface that reach high enough temperatures to support liquid water.

Regardless of where it might be found, the prospect of life on Titan is a rather hot topic. NASA recently (as of the writing of this article) announced that they plan to land a new drone on the surface of this unique moon, so with any luck we'll have more information about Titan's potential lifeforms by the year 2034. 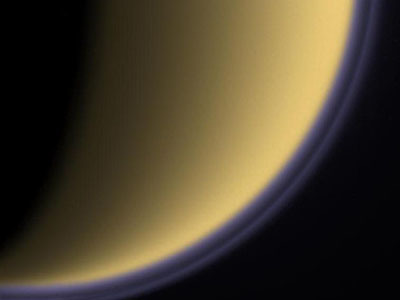