Rear Admiral Grace Hopper - Mathematician and Computer Scientist Content from the guide to life, the universe and everything 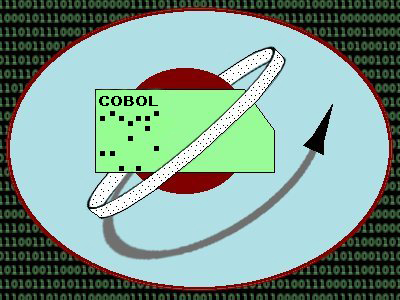 Rear Admiral Grace Hopper was a pioneer in the field of Computer Science. Among the many achievements in her long and distinguished career was the work that laid the foundations for the COBOL1 programming language.

Grace Brewster Murray was born on 9 December, 1906 in New York, USA. Her father, Walter Fletcher Murray, was thought to be a descendent of George Murray, who served as Captain on Horatio Nelson's flagship HMS Victory and reached the rank of Vice-Admiral. Her mother Mary Campbell van Horne was a descendent of Alexander Wilson Russell, a Rear Admiral in the US Navy. Walter ensured that all three of his children (Grace was the eldest and she had a brother and a sister) received a good education.

Grace's technological curiosity manifested itself when she was seven years old - she dismantled her alarm clock to try to find out how it worked. She was unsuccessful in her attempt to reassemble the clock, so she tried again, and again - after she had dismantled seven clocks, Mary found her and stopped her from doing any more damage. When Grace was an adult, a clock illustrated her willingness to try new things:

Humans are allergic to change. They love to say, 'We've always done it this way.' I try to fight that. That's why I have a clock on my wall that runs counter-clockwise.

Mary had not been able to study much mathematics because it was not deemed proper for her, as a woman, even though she had enjoyed it. Grace had similar aptitude for the subject and was determined to pursue it - she applied to Vassar College in 1923 to study Mathematics and Physics, but failed the Latin component of the entrance exam, so she spent a further year studying and was successful in 1924. She graduated in 1928 with a Bachelor's Degree. From 1928 to 1930 she studied at Yale University and was awarded a Master's Degree in 1930.

In 1930 Grace married Vincent Hopper, a lecturer in English at New York University. In 1931 she was employed as a mathematics tutor in Vassar College, but continued studying at Yale2. She was awarded a doctorate in mathematics in 19343 and by 1939 she had been promoted to the role of Associate Professor at Vassar College.

During the Second World War, mathematics tutors were excepted from military service as their work was important to the war effort, but Grace was determined to enlist. At 34 and weighing less than 50kg (8st), she was too old and too light but she asked for a waiver and became a member of the US Naval Reserve in 1943.

She attained the rank of Junior Lieutenant after completing the initial training, and was assigned to Harvard University to work on their military computer, the Mark I. She learned how to program it, and also put together a user manual for it. Her marriage was less successful - in 1945, Grace and Vincent were divorced4.

After the War, Grace continued in the Naval Reserve, working as a Research Fellow at the Harvard Computation Laboratory. While working on the Mark II computer to find out why it was producing errors one day in 1947, she asked her team to check a particular component and an actual bug was discovered - a moth had got into the machine and disrupted part of the mechanism. The moth was removed and preserved in the Laboratory log book with the words 'first actual case of bug being found' (the term 'bug', meaning a technology glitch, had been known since at least the 1860s when Edison used it to describe the imaginary insects that disrupted his work).

Grace joined the Eckert-Mauchly Computer Corporation in 1949, as Senior Mathematician. She wrote programs for their Binary Automatic Computer (BINAC) and then in 1950 she became Senior Programmer and worked on UNIVAC (Universal Automatic Computer)5. She developed a programming language for UNIVAC that would become known as FLOW-MATIC and which would in turn influence the development of COBOL.

Grace worked her way up the ranks of the company, and also the ranks of the Naval Reserve - in 1959 she was Chief Engineer of the UNIVAC Division, and had been made a Commander. She was also a Visiting Lecturer at the University of Pennsylvania School of Electrical Engineering.

In 1966, at the age of 60, Grace was retired from the Naval Reserve. However, in 1967 she joined the Navy to implement COBOL to carry out tasks such as computerised payroll. She retired from UNIVAC and the School of Electrical Engineering in 1971 at the age of 65, but took the role of professorial lecturer at George Washington University instead. She was promoted to Captain in 1973, and Commodore in 1983. In 1985, her rank became Rear Admiral6, so she had followed in the footsteps of her (male) ancestors. In 1986, at the age of 80, she was retired from the Navy and received the Distinguished Service Medal.

Grace continued to work, as a consultant to the Digital Equipment Corporation, giving presentations and networking with academic and business contacts. She died in her sleep on 1 January, 1992 at the age of 85. She received full military honours and was laid to rest in Arlington National Cemetery.

During her long career, Grace received many honours and also left an important legacy in the field of Computer Science.

Notably, Grace was named as Computer Science 'Man7 of the Year' by the Data Processing Management Association and received the Ada Lovelace Award from the Association of Women in Computing. She appeared on television in The David Letterman Show in 1986. She was awarded the National Medal of Technology in 1991.

Grace Hopper's name lives on in a number of ways. The Grace Murray Hopper Award for 'outstanding young computer professional of the year' has been awarded annually since 1971. The Grace Hopper Celebration of Women in Computing Conference has been held biennially since 1994. And in 1996 a US Navy Destroyer was named USS Hopper in her honour.

1The Terminator in the 1984 film of the same name is seen to use COBOL, demonstrating the reach of the programming language.2Vassar College, Yale University and New York University form a roughly-equilateral triangle with sides of approximately 70 miles long.3Vincent obtained his PhD in 1938.4They had had no children. Grace never remarried, but Vincent did marry again and had a son. Vincent died in 1976 at the age of 69.5UNIVAC inspired the name of the Multivac supercomputer in stories by Isaac Asimov.6In 1985 'Commodore' in the US Navy had its meaning changed from being an official rank to a title applying only to captains of more than one ship. Those who had held the former rank of Commodore became known as Rear Admirals.7As Grace was the first to receive such an honour from the Data Processing Management Association, it seems strange that they did not select a better title for the award...