'The Terminator' - the Film Content from the guide to life, the universe and everything 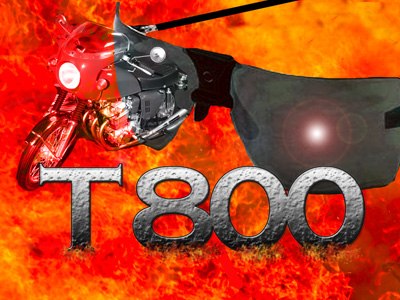 The machines rose from the ashes of the nuclear fire. Their war to exterminate mankind had raged for decades, but the final battle would not be fought in the future. It would be fought here, in our present. Tonight...
- Opening Text

A heart-wrenching tale of doomed love. A glimpse into tomorrow's nightmare predicts an epic battle of man against machine. The Terminator is more than the film that launched the careers of Arnold Schwarzenegger and James Cameron. The story only tells half the tale as the film itself unrolls an array of iconic images that lodged straight into the cinematic subconscious.

On Thursday 12 May, 1984, two beings from the future arrive in Los Angeles. One has come to kill Sarah Connor, the other to protect her. Though she appears to be merely an ordinary waitress, she is really the mother of humanity's last hope. For in the near future a Defence Network Computer named Skynet, built for NORAD by a company called Cyberdyne Industries, will start a nuclear war to wipe out humanity. When the human race faces extinction, the species will be saved by one man: John Connor, Sarah's as yet unborn son.

The assassin is a robot from the future, known as a Terminator. By sending it back from 2029 to kill Sarah, Skynet hopes the Terminator will prevent the birth of its enemy. It can't be bargained with. It can't be reasoned with. It doesn't feel pity, or remorse, or fear and it absolutely will not stop, ever, until Sarah Connor is dead.

Yet what the computers have not realised is that not only does Sarah Connor have a guardian, but also there is more to her than is immediately visible. She is stronger than she imagines she can be.

Characters and actors in Bold appear in other Terminator films.

In 1980, a young, unknown James Cameron was ill in Rome1. During this illness he saw a fever-dream image of a skeleton-like metallic man walking through flames in a threatening manner. Inspired by this image, on his return to America Cameron and his friend William 'Bill' Wisher developed this image into a draft script. Cameron would later say:

I came up with the entire plotline all in one wallop, pretty much as it was later filmed, though it took many months of fine-tuning to work out the characters and everything else in detail.

When the script was finished he contacted producer Anne Gale Hurd, who had her own production company, Pacific Western. Cameron agreed to sign over the rights to The Terminator to her for $1, in exchange for a guarantee that he would direct the film2. Hurd helped edit the script and was given a screen-writing credit, although Cameron insists that she did not actually write any new material. Hurd sent the finished script to contacts at Orion Pictures, who agreed to distribute the film if they found finance for it, which British production company Hemdale Film Corporation agreed to provide. The executives behind these film companies had been persuaded to take a chance when actor Lance Henrikson, who had befriended Cameron during the making of Piranha II, turned up to a meeting in make-up looking like the robotic Terminator.

Having given the film the go-ahead, the film's backers considered it to be a minor, cheap and cheerful, low-budget production and as such were prepared to allow first-time director Cameron a free rein.

As soon as I read the script, I knew I wanted to play the Terminator. It's a completely different kind of character.
- Arnold Schwarzenegger

Arnold Schwarzenegger had previously only been known for playing Hercules and Conan the Barbarian. Despite this he impressed Cameron so much that when he was forced to make Conan the Destroyer, Cameron agreed not to recast, but to suspend production until he was free. Cameron used this time to further prepare for the film, as well as work on the script for Aliens.

As Lance Henrikson had been crucial in finding funds for the film, he was given the role of Detective Hal Vukovich. Michael Biehn was cast as Reese as he brought a vulnerability to the role, creating a believable connection with Linda Hamilton, who played Sarah Connor. She was chosen as she was able to portray both a girl next door and a tougher, more resilient character at the end of the film. Shortly before making the film, Linda Hamilton broke her ankle. She nevertheless carried on, doing all the required running while recovering.

As a low-budget film, many cost-saving tricks were employed to make the film as cheaply, and as effectively, as possible. Oscar-winning effects artist Stan Winston, then best known for The Thing (1982) did the full-size Terminator effects. Model effects company Fantasy II, led by Oscar-winner Gene Warren Jnr, did the sequences set in the future, filming miniatures and some stop-motion animation of the Terminator endoskeleton. Fantasy II were chosen as they had a reputation for doing in-camera effects. Cameron wanted in-camera effects rather than effects added in post-production as he knew this would be cheaper. All the effects were closely based on storyboards he drew3, which ensured that the work Stan Winston did matched the miniature and stop-motion work perfectly.

Surprisingly, stop-motion animation was barely used, limited to scenes of the Terminator limping. Most of the Terminator endoskeleton scenes were created using animatronic puppets and props created by Stan Winston. The film effectively used forced perspective models combined with front screen and rear screen projection to give the impression that live-action characters were running through the model landscape. The models were shot with smoking backgrounds that created a background haze to help give the scenes a sense of scale as well as atmosphere. The most impressive miniature work was the tanker explosion, created using a 1/6th scale model of a real tanker. The effect was made up of 42 separate explosions to give the sense of scale.

Some of the effects came from old camera tricks. For instance, acid was poured on Schwarzenegger's jacket in order to make it smoke, implying his robotic nature. In none of the car chases do the vehicles4 travel at more than 40mph; lighting effects were used to make the vehicles look like they were travelling much faster than they really were. Many effects were done on the lowest possible budget. The shot showing the Terminator's 'death' as it is squashed in a press was simply created using silver foil, cigarette smoke and a dimming lightbulb. Similarly, the shot of Reese being zipped inside a body bag was actually filmed using Cameron's suit bag.

The skeleton fight in 'Jason [and the Argonauts]'... The images of those skeletons leaped off the screen and drilled straight into my DNA. I'm sure there's a direct link between those demonic skeletons and the chrome death figure in The Terminator.

Cameron has stated that numerous sources helped to inspire the film. 1940s Film Noir in particular was a strong influence. Not only would Cameron film in a city at night, but also the name of the nightclub in which Sarah is first confronted by the Terminator and meets Reese is named 'Tech Noir' as a homage to, and statement of, the style of filmmaking Cameron was employing. 1930s German expressionism also affected this.

Terminated? I'll Be Back

There were a few deleted scenes. Unusually for a James Cameron film, these have not yet been released as a part of a longer 'director's cut'. They do, however, reveal more about Sarah Connor and her relationship with Reese. They also tie in neatly with the sequel, with one sequence showing how Sarah wished to attack the company that would later create Skynet. Another showed that the factory in which the Terminator was squashed was Cyberdyne Systems, the company revealed to be the one responsible for creating the mechanised monster that destroys the world.

The Terminator is more than a mere special-effects fest. Its audience was more than the narrow, traditional, male teen group usually associated with cheap science-fiction films. By having a strong love story at its heart and a leading lady action hero, the film found female fans, doubling its audience, gaining critical applause and becoming a cultural phenomenon.

Arnold Schwarzenegger gives a measured performance that plays to his strengths; he shows focus and intent to kill, not reducing the role of a robot eradicator to a dull, blank slate. Schwarzenegger gave his eyes sinister, surveillance camera style movements. By adopting smooth, efficient actions rather than jerky, robotic motions he comes across as a focused threat, aided by the low camera angles that make him seem larger than life.

When we first see her, Sarah Connor is the epitome of the 1980s, having strange hair, wearing shoulder pads and riding a bizarre angular 80s moped5. She works in an unpleasant burger restaurant environment. She not only faces unfriendly customers but the other waitresses smoke in the restaurant. Her cooking competence comes in handy later when she makes bombs instead of cakes. By the end of the film her total transformation into an action heroine has been both gradual and believable as we see how she has become the character so admired by Reese.

The film effectively portrays a haunting future world through two short sequences featuring Reese. The glimpses we see of flashbacks into the future world are filled with skulls6, which effectively contrasts with the skull-shaped head of the Terminator endoskeleton. To give added depth to these brief experiences, Reese explains to Sarah, and by extension the audience, exposition about his back-story, but he always does this during action sequences. For example, he tells Sarah what the Terminator is and why it is after her during the thrilling car-chase sequence. This ensures that the film’s frantic pace never slows down.

The film perfectly combines sound and imagery. The music is very effective, with the use of percussion giving a metallic heartbeat effect, yet it is the images, particularly that of Arnold Schwarzenegger as the shades-wearing heavily-armed cyborg, that entered the world consciousness. The iconic image, which has since been often recreated and spoofed, had a specific purpose in the film. It is often forgotten that the reason why the Terminator wears shades is that, following a car crash, he needed to disguise the fact he had a robotic eye. Weaker sequels had the Terminator wearing shades without reason, because they somehow felt that that was what the Terminator did.

Although it would be impossible to list every influence that the film has had, here are a few examples:

The Terminator Film Series
The Terminator | Terminator 2: Judgement Day
Terminator 3: Rise of the Machines | Terminator Salvation | Terminator Genisys
Terminator: The Sarah Connor Chronicles
1Cameron had flown to Italy to direct the low-budget Piranha II, although he was replaced after having contributed to only part of the film.2This would become the first film he fully directed.3Cameron had wanted to be a comic book artist as a child and entered the world of movie making as an artist. He has always had a strong visual focus when making films.4The Terminator's iconic motorbike is the Honda CB750 Four.5The 1984 Honda Scooter Elite.6Always skulls, never any other type of bone.