'Terminator: The Sarah Connor Chronicles' - the Television Series Content from the guide to life, the universe and everything 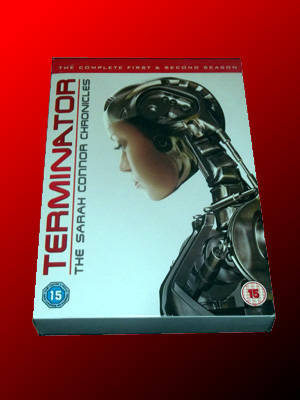 Terminator: The Sarah Connor Chronicles1 (2008-09) was a television spin-off of the Terminator series. It was commissioned in 2007 by Warner Bros Television four years after Warner Bros had made Terminator 3: Rise of the Machines. Despite only lasting for two series, it has acquired a dedicated fan base.

One of the series' main themes was that of the morality of mankind compared to the cold calculations of computers. Sarah and John lose as many fights as they win, key characters are killed off and the emotionless enemy always seems one step ahead of them, undefeated. Despite this, with the fate of the world at stake, they are determined to never give up.

In 1999, Sarah and her son John Connor have settled into a quiet town so well that a medic named Charley has proposed to her. Unwilling to form attachments they leave and soon encounter two disguised Terminators, a T-888 named 'Cromartie' and a T-900 number TOK-715 named Cameron, who has been programmed to keep John safe. With FBI agent Ellison chasing them and having been located by Skynet, the computer programme that destroys the world, they jump in time to 2007 in order to stop Skynet's creation.

In 2007 they soon encounter Derek Reese, John's uncle, who had travelled back in time hoping to find his brother, Kyle. They try to locate an artificial intelligence chess-computer known as the Turk, which they believe may be the origins of Skynet. Also interested in this computer is someone impersonating Catherine Weaver, the head of a major international company. Mrs Weaver is really a shape-shifting Terminator from the future who seems to have her own agenda.

Can Sarah keep John safe? Can he experience a normal, teenage life and have a girlfriend? Is Cameron more than a mere machine? Does Sarah's obsession with a three-spotted pattern have any meaning, or has she gone dotty?

Characters in Bold appear in other Terminator films.

The mother of John Connor, Sarah is determined to keep him safe and train him to be the future leader of mankind. She has learned that in an alternate reality she died of cancer, and worries that her health will fail, leaving John alone and vulnerable.

A teenager who knows that he is destined to be the leader of mankind and is burdened by this. He longs to experience an ordinary childhood in which he isn't a target and, most of all, where other people don't sacrifice their lives for him. He is beginning to question his mother; knowing he will one day lead mankind means he wishes she will trust his judgement.

A Terminator resembling a teenage girl that was re-programmed in 2029, the desolate, post-apocalyptic future, and sent back to keep John Connor safe. Cameron was designed to resemble one of the future John Connor's closest friends, Allison Young, and was programmed with the details of Allison's life, including her childhood home telephone number. After capture, Cameron became John's loyal bodyguard and advisor before being sent back to protect the young John. Is Cameron capable of being more than her programming and feeling actual emotions?

Cameron was played by Summer Glau, best known for being River Tam in Firefly, and named after James Cameron, creator of The Terminator.

The FBI agent assigned to investigate the Sarah Connor case, he gradually becomes convinced that her story of robots from the future trying to ensure the human race is destroyed is true. Ellison is named after science-fiction author Harlan Ellison who sued Orion after The Terminator was made, stating that the storyline had points in common with two episodes of The Outer Limits he had written.

Harlan Ellison is not the only one with that surname to be involved in the series. Curiously, Megan Ellison's production company Annapurna Pictures bought the rights to the Terminator series in May 2011 and made Terminator Genisys (2015) with Skydance Productions, owned by her brother David Ellison.

After [Terminator 3: Rise of the Machines] was released, I felt like I really, as a fan of the franchise, I really wanted to see Sarah again. And the idea of seeing her on a television show was even more interesting to me because you get to see more of what makes Sarah an iconic character.
- James Middleton, executive producer

The television series was made by Warner Bros Television in association with C2 and was broadcast on FOX. C2 was a company formed by Andrew Vajna who had previously founded Carolco Pictures, the company that had acquired the rights to the Terminator series in 1990 and had made Terminator 2: Judgement Day (1991). When Carolco Pictures went bankrupt in 1997 Andrew Vajna founded C2 and purchased the Terminator rights, making Terminator 3: Rise of the Machines which was financed by Warner Brothers. Yet in 2007, the rights to the Terminator series were bought from C2 by the Halcyon Company.

The television series followed the adventures of Sarah Connor, despite the fact that she had been declared dead in Terminator 3: Rise of the Machines (2003). This was explained as being an alternative timeline, caused by Sarah, John and Cameron travelling in time from 1999 to 2007.

A pilot episode was made in early 2007 which led to a full series being commissioned. A few changes were made to the pilot; a different actor was cast as Sarah's fiancé, scenes featuring him reshot and a scene involving a gun battle at a school was heavily toned-down following the real-life Virginia Tech massacre in April 2007. The new series was scheduled to be broadcast from early 2008. The series' showrunner, John Friedman2, planned a three-year arc for the series to follow. Only nine episodes of the first series were made as production was halted by the 2007 Writers' Guild of America strike.

The series was heavily promoted and the first episode attracted over 18.6 million watchers, FOX's highest audience for three years. After the first series stalled, the number of viewers for the second series declined until it dipped below five million. Although plans had been made for the third series to be set in the future and tie the story together, the show was not renewed when series two ended, finishing on a cliff-hanger.

One of the consequences of the rights to the Terminator being complex was that restrictions were placed on the series. Although the series was allowed to call itself Terminator: The Sarah Connor Chronicles and use characters and things introduced in the first two Terminator films, such as Sarah and John Connor, Kyle Reese and the existence of Cyberdyne and Skynet, there were legal restrictions preventing the use of the name 'Terminator' in the episodes. Due to this, individual Terminators soon acquired names, such as 'Cromartie' or 'Cameron', while collectively they were described as 'Metal' or 'Robots'. Often the Terminators were described by their type, mainly 'T-888' and known as 'Triple-Eights'.

The television series began, like all in the Terminator series, with someone from the future come to protect the Connor family from more powerful cyborgs determined to ensure that machines dominate the Earth. Yet after the pilot episode the interplay of different characters, rather than special effects, dominates. The 31-episodes allow characters to develop and become defined in a way impossible in the films.

For fans wanting to see explosions, fights and violence there are episodes that deliver this. Highlights include a car chase sequence in the LA River that reminds viewers of a famous chase sequence in Terminator 2: Judgement Day that used the same location. Another is a Terminator vs. Terminator fight sequence in which Cameron fights a robot played by a contortionist who gives the impression that she is a cyborg damaged and bent into angles impossible for humans.

The television series is unusual in having so many very strong female leads. These include the titular character and Cameron, the robotic family guardian. The lead 'villain' for the second series, 'Catherine Weaver', was played by Shirley Manson, the lead singer from Garbage. She had previously appeared as a robot time-bomb in the music video for James Bond film  The World is Not Enough. One of the second series' intriguing relationships is that between the liquid-metal Terminator disguised as 'Catherine Weaver' and the real Catherine's young daughter Savannah who 'misses her old mommy'. Another strong female character is Jesse, who has travelled back from the future with her own agenda.

The series has a distinct score that was inspired by the original two films. Oil cans and hub caps were used as instruments to give the score a metallic feel. The second series began with Shirley Manson singing old 1920s Gospel song 'Samson & Delilah'.

As the first series ended abruptly because of the strike, some minor plotlines were never resolved. There was a plot revolving around a classmate's suicide which was never explained, and John encountered a mysterious blonde girl in school named Cheri Westin. The second series began with John encountering another mysterious blonde girl, Riley Dawson, at his new school. Would Cheri's character have evolved into Riley?

As series 2 continued, viewers saw more and more glimpses of the future world in which the resistance movement, led by John Connor, fights back against Skynet and how the war affects many of the recurring characters. The series concluded with a cliff-hanger in which various characters, including John, have travelled into that future while others, including Sarah, remain in the 'present'. The third series promised to explain the actions of characters in series 2 and tie the whole story together, but tragically this was never made.

A fun, intelligent science-fiction series made in the early 21st Century? Inevitably it was cancelled before you could say 'Firefly, Futurama 'n' Farscape'. Since 2009 fans of the show have campaigned for it to be continued, or at least concluded. Yet the companies that now own the rights to The Terminator franchise have to date been more interested in making their own film than continuing a television series they were not involved in creating.