The Terminator Film Series Content from the guide to life, the universe and everything 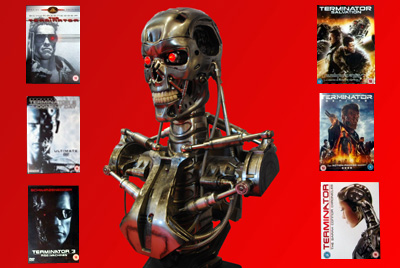 With five films (and a spin-off television series) made between 1984 and 2015, the Terminator film series is one that can easily be divided into two halves: the first two films, which were written and directed by James Cameron and are considered to be excellent, and the sequels made since, which weren't and aren't.

Most of the films follow the same pattern. A guardian from the future travels back in time to protect a member of the Connor family (either Sarah Connor or her son John) from a powerful robotic assassin called a 'Terminator'. These Terminators come from a world where an artificial intelligence known as Skynet has launched a nuclear war to wipe out mankind, only for the human race to fight back under the leadership of John Connor. The story then develops in different directions from there. Only Terminator: Salvation does not follow this basic plot.

The Terminator film series came from a graphic vision seen in a fever by one man, James Cameron. The first film, The Terminator, established an iconic image of Arnold Schwarzenegger sitting on a motorbike1 while wearing dark shades. Sadly many films since then have concentrated on this image more than anything else. A single picture makes a movie poster, not a motion picture.

Unusually, all the five films in the Terminator series to date have been made by a different studio.

A heart-wrenching tale of doomed love set against an apocalyptic background of an epic final battle of man against machine. A man, Kyle Reese, comes back from the future in order to prevent an assassin-machine known as a Terminator from killing Sarah Connor before she gives birth to John Connor, who is destined to lead the resistance movement against the machines.

The script was written by a young, unknown James Cameron who sold the intellectual property rights to The Terminator for $1 to producer2 Gale Anne Hurd's production company Pacific Western in exchange for a guarantee that he would direct the film. Half the rights were then sold to Hemdale Film Corporation in order to raise enough money to finance the film, which was distributed by Orion Pictures. They considered it a minor, cheap and cheerful, low-budget production starring a largely unknown actor called Arnold Schwarzenegger, who had previously only been Hercules and Conan the Barbarian. On release the film became a cultural phenomenon.

Well, he did say he'd be back... Affectionately known as T2, this is one of the most successful sequels of all time, and once again is a film written and directed by James Cameron. Having seen what could be achieved with Computer Animation when making The Abyss (1989), Cameron created a special-effects milestone full of action and suspense, reuniting the audience with the story of the Connors.

Part of the long delay between the release of The Terminator and Terminator 2: Judgement Day was caused by the rights being owned by Hemdale Film Corporation, who were in financial difficulties. Schwarzenegger used his influence to persuade the head of Carolco Pictures to purchase these rights from Hemdale and finance the film. Cameron, Schwarzenegger and Hamilton reunited for the film, this time with the Terminator as a hero and father figure to John Connor, protecting him from the even more deadly shape-changing T-1000 Terminator model.

The film won four Oscars, for Make-up, Sound, Sound Editing and Visual Effects. On release it was the most expensive film ever made, but it was a phenomenal box office success and also the most successful sequel.

This was the first film in the series not to have been written or directed by James Cameron. Instead it was directed by Jonathan Mostow. The film's premise is that instead of Judgement Day having been averted by the actions of the second film, it was merely postponed. A new, even more advanced, Terminator model, a T-X nicknamed the 'Terminatrix', comes back in time from the future to kill John Connor, while naturally an Arnold Schwarzenegger-shaped T-850 comes back too to be the goodie.

Linda Hamilton chose not to return as Sarah Connor and though Arnold Schwarzenegger had his doubts, planning on moving away from acting and into politics, he agreed to appear after James Cameron advised him to do it for the pay. Schwarzenegger was given $30 million plus 20% of the profit.

The film was made by C2 Pictures and distributed by Warner Brothers in the US, and by Columbia worldwide. In 1997 Carolco Pictures, which owned 50% of the rights, had gone bankrupt. The rights were then sold to Carolco's owners, Mario Kassar and Andrew G Vajna, who formed C2 Pictures in 1999 and purchased the 50% of the rights that Gale Anne Hurd had retained.

The film made over $400 million in the box office; though this was not as successful as Terminator 2: Judgement Day, it was still an impressive result.

Following the release of Terminator 3: Rise of the Machines, Arnold Schwarzenegger left filmmaking to pursue a career in politics. It then took six years for a sequel to be made, during which time C2 Pictures closed. The Halcyon Company acquired the franchise rights from Mario Kassar and Andrew G Vajna, who had already licensed the creation of a Terminator television series, Terminator: The Sarah Connor Chronicles (2008-9).

This was a television spin-off commissioned in 2007 by Warner Bros Television, following the success of Terminator 3: Rise of the Machines. Despite only lasting for two series, it has acquired a dedicated fan base. Ignoring the plot of the third film it has Sarah and her son John Connor, protected by a T-900 number TOK-715 named Cameron, travelling in time to 2007 in order to stop the creation of Skynet while avoiding a T-888 Terminator named 'Cromartie' and FBI agent Ellison. They are aided by Derek Reese, John's uncle, who had travelled back in time hoping to find his brother, Kyle. They also frequently encounter the head of a major international company, Mrs Weaver, who is really a shape-shifting Terminator from the future who seems to have her own agenda.

The television series was made by Warner Bros Television in association with C2 and was broadcast on FOX. While the series was in production the rights to the Terminator series were bought from C2 by the Halcyon Company. A three-year story was planned yet only nine episodes of the first series were made before production was halted by the 2007 Writers' Guild of America strike. Ratings declined during the second series, leading to the show's cancellation.

When Halycon purchased the film rights to the Terminator series they wanted to make films, rather than a television series. After receiving funding from a company called Pacificor, they negotiated distribution deals with both Warner Bros and Sony Pictures and announced that they would be making a new Terminator trilogy.

As Schwarzenegger was unavailable, their first film concentrated on John Connor and his survival in the post-apocalyptic world ruled by the machines. Connor was now played by Christian Bale, and the film developed his relationship with Kyle Reese (Anton Yelchin), the man destined to be his father. It included the character of Kate Connor née Brewster (Bryce Dallas Howard), who had been created for Terminator 3. The film also featured a man named Marcus (Sam Worthington) who had undergone scientific experimentation to turn him into a machine. None of the recurring characters were played by actors who had appeared in previous Terminator films or series.

On release the film was reasonably successful, though nowhere near as popular as previous films. Despite this, the Halcyon Company, facing legal action from Pacificor regarding the repayment of their funding loan, filed for bankruptcy. The Halcyon Company not only abandoned plans to make another two films but announced they would auction off the Terminator rights, asking for $60 million but initially receiving only one offer of $10,000.

In 2011 Megan Ellison and her company, Annapurna Pictures, bought the Terminator rights for $20 million and agreed to collaborate on making a film with her brother David Ellison's company Skydance Productions, with finance by Paramount Productions. They wished to return to a story similar to the first two Terminator films and consulted James Cameron on the Terminator's role. Although Arnold Schwarzenegger was signed up to return as a T-800, new actors were hired to play Sarah Connor (Emilia Clarke), Kyle Reese (Jai Courtney) and John Connor (Jason Clarke). It was also announced that this film would be the first in a new trilogy.

The plot followed that of The Terminator quite closely for several minutes, only to veer off and explore the idea of what it would be like if one of the principal heroes of the series was now the villain, reversing Terminator 2: Judgement Day's twist of having Schwarzenegger's Terminator as a hero. Reese travels back from the future to 1984 and meets Sarah Connor, then they both travel to 2017, where they fight to stop Skynet's activation through an operating system app known as 'Genisys'. In 2017 they encounter their grown-up son John, as well as meeting up with the Terminator who had been waiting for them since 1984. Skynet, too, has anticipated their re-appearance and has prepared a trap for their arrival.

The film fared poorly at the box office, finishing behind Jurassic World, Pixar's Inside Out, and Minions. Although slightly successful worldwide, it failed to break even in the US. The announced plans for sequels were quietly abandoned.

Many of the Terminators are Infiltrator units; designed to look like people, their tasks were to mop-up the human survivors of the Nuclear War. Not all of Skynet's cybernetic soldiers use the human form, however.

The first Terminator encountered was the Cyberdyne System Model 101 – Cyborg (T-800) series from the year 2029. Designed to look perfectly human, this was a much newer model than the T-600 rubber. Despite what later films imply, not every T-800 looks like Arnold Schwarzenegger - only Model 101s do, as a different T-800 appears in The Terminator in a flashback sequence set in the future, in which a Terminator infiltrates a human resistance bunker. Terminator 3: Rise of the Machines features a T-850 that outwardly looks identical to the T-800 101s previously seen.

Most Terminators have a living tissue skin, which allows them to both pose as humans and travel through time, as only something covered in living flesh can survive the journey. This living tissue ages at the same rate as human skin, but can also regrow.

Arnold Schwarzenegger's Terminator is the only character that the American Film Institute listed as both a villain and a hero in their Top 100 Heroes and Villains.

The Terminator was closely studied by Paul Verhoeven when he made Robocop.

The Terminator has been selected by the National Film Preservation Board as a film to be preserved in the Library of Congress.

James Cameron will be able to regain the rights to the series in 2019 under section 203 of the 1978 Copyright Act, as this is 35 years after the first film was made.

1A Honda CB750 Four.2Later to be James Cameron's second wife (1985-1989).3Through the use of CGI, superimposing Schwarzenegger's face on Roland Kickinger's body.4Brett Azar as original Terminator body, with Schwarzenegger's face added through CGI.5Also in a scene in the Terminator 2: Judgement Day Special Edition.6Robot characters first seen in Short Circuit (1986), Up (2000) and Robocop (1987).