Stand By Me: The Journey Started with Some Sheet Music Content from the guide to life, the universe and everything 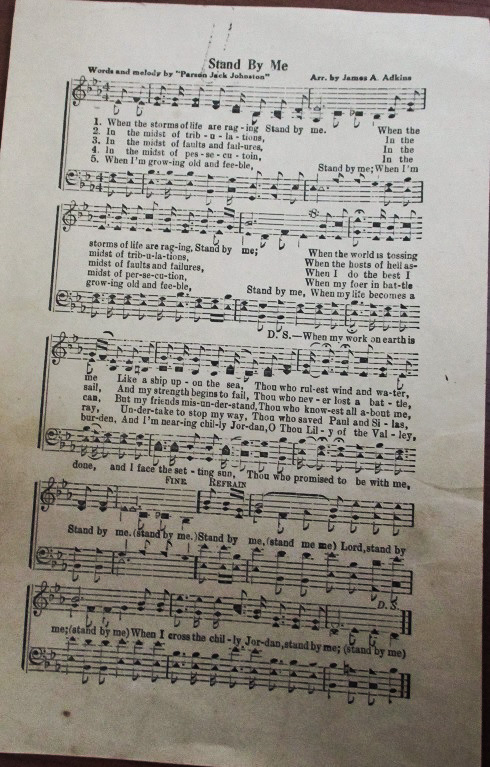 When the world is tossing me like a ship upon the sea
Thou who rulest wind and water, stand by me.
- Charles A Tindley, 1905

This journey starts with a piece of sheet music and ends at a royal wedding. In between, we meet some historical figures, mostly preachers and musicians. At the end, we can draw a few conclusions about the historical witnesses in our piano benches.

We find this sheet of music, titled 'Stand By Me', lurking unobtrusively in a stack of old sheet music. Its provenance is doubtful: somehow it ended up among the detritus acquired by a Georgia seller of used books and music. The single sheet is an odd artefact: it looks like a page from an old hymnbook, the kind found in most country homes of the 1920s-1960s. In a hymnbook, though, we would expect to find another hymn on the reverse, and the back of this sheet is totally blank. There are no page numbers, either. It seems to be a single sheet.

The music notation points to a particular practice of gospel hymnbooks of this period: shape notes. Shape notes were a relic of the old 'singing schools' and 'Sacred Harp' tradition of the 18th and 19th centuries. Shape notes locate the relative position of the notes on a scale. Those little squares and triangles are part of a do-re-mi system. This piece of sheet music was probably copied from an old shape-note hymnal.

But it wasn't the most popular hymnal in use: the Broadman Hymnal, published in 1940 by the Southern Baptist Broadman Press in Nashville, Tennessee, BB McKinney, editor, has a different version of the song. The echoes say 'by me', not 'stand by me', and there is no chorus.

The chorus makes us think this particular version of 'Stand By Me' might have come from the prolific publishing efforts of the Stamps-Baxter Music Company, those giants of the Southeast US gospel industry who flourished between 1924 and the 1960s and published stacks and stacks of shape-note gospel hymnbooks. Stamps-Baxter songs were very popular with musicians putting together radio programmes – in fact, some of their books have titles like Songs of Joy: For Radio and General Use and Super Specials Number Five: For radio, convention and wherever new special songs are needed1. Assiduous searching has failed to turn up a Stamps-Baxter version of 'Stand By Me' with chorus, but there were a lot of Stamps-Baxter songbooks printed on very cheap paper, which may not have survived. One can still hope. The addition of the chorus sounds very much like the flourishes of the publishers of such hits as 'The Royal Telephone' and 'Just a Little Talk with Jesus'. We can't prove it, but this single sheet might have been copied from one of their books.

While we don't know the exact provenance of this piece of sheet music, we do know that it contains at least one lie. Uncovering it is the next step in our research.

Do primary sources ever lie? Of course they do. They lie all the time. Paul Revere's engraving of the 'Boston Massacre' contains several lies, just like most political cartoons. A soundbite by Richard M Nixon is a primary source from its time period, but is unlikely to contain the unvarnished truth. The lie on this piece of sheet music is the author line:

Words and Melody by 'Parson Jack Johnston' – Arr. [=arranged] by James A Adkins

'Parson Jack Johnston' didn't compose this song: the Reverend Charles A Tindley of Philadelphia did, in 1905. So how did Parson Jack's name get on the music? And who was he, anyway? This requires more research.

According to Who Runs Georgia?, the ground-breaking 1947 investigative survey of the state's politics by Calvin Kytle and James Mackay, 'Parson Jack' Johnston was an anti-integrationist pastor and radio preacher in Columbus, Georgia. These journalists2 wrote that Johnston told them, 'I'm not a member of the Ku Kluck3[sic]. I was a member of the old Klan, but I haven't joined this new one.' In addition to his racial views and outspoken opposition to labour unions (he was financially backed by cotton-mill owners), Johnston was noted for pastoring a church, the Baptist Tabernacle, in Columbus, with an unusual feature. The mural behind the baptistry was a velour painting intended to portray the River Jordan. It included a full moon that was electrically illuminated and a waterfall through which actual water flowed into the baptismal font. Johnston was very proud of this feature, and demonstrated it to Kytle and Mackay during their interview.

We know from impeccable sources that Parson Jack Johnston didn't compose 'Stand By Me'. Johnston is not known to have composed any music at all. So how did his name come to be on this piece of sheet music? We know two other things about Johnston: he owned a printing press4 and he had a radio programme on station WRBL in Columbus.

Which brings us back to musicians.

Chet Atkins is an important figure in 20th-Century popular music. His mastery of the electric guitar is legendary. What is perhaps less known is that Atkins came from obscure poverty. Atkins grew up in a very backward town in Georgia. How backward was it? Chet bought an electric guitar, but to plug it in, he had to ride to Columbus with his dad when he went there for work. While in Columbus, Atkins got a job playing for... you guessed it... Parson Jack's radio show. He probably played 'Stand By Me'. He might even have been involved in its arrangement: could 'Arr by James A Adkins' be a reference to Chet's half-brother Jim, already a successful guitarist with the Les Paul Trio? This would be hard to prove.

The only facts we know for sure are that Parson Jack owned a printing press and did radio broadcasts that included gospel music. We also know that he didn't write 'Stand By Me' – and we know who did: a black man.

Charles A Tindley was born in Berlin, Maryland in 1851. His father was enslaved, but not his mother. Unfortunately, his mother died when he was four, and he couldn't live with his father because that might endanger his free status. Tindley worked hard to educate himself. While working as a janitor at Calvary Methodist Church in Philadelphia, Pennsylvania, he took correspondence courses in theology. He learned Greek that way, and picked up Hebrew at a local synagogue. Eventually, Tindley became the pastor of the same church where he'd been a janitor. He helped that church to grow: eventually it had at least 10,000 members – and they were a multiracial congregation that included black, white, and Hispanic Christians.

Tindley and his congregation were socially active. They helped members learn trades and get jobs. They even marched in protests, like the one Tindley led in 1915 against the showing of DW Griffith's Birth of a Nation. Reverend Tindley wrote a lot of hymns. He's considered one of the fathers of modern African American gospel music. His hymn, 'I'll Overcome Someday', inspired the Civil Rights-era anthem, 'We Shall Overcome'.

How Do We Get to the Royal Wedding?

Ben E King, a soul and R&B singer of renown, wrote his 'Stand by Me' in collaboration with songwriters Jerry Leiber and Mike Stoller. He says he was trying to update Charles Tindley's hymn. He wanted it to be sung by The Drifters, but the group passed on recording it. Instead, it became a hit for King.

King's 'Stand by Me' owes a lot to Charles Tindley's hymn. Like the original, it's a song about strength in adversity, about overcoming obstacles. During the 1960s, popular music encouraged participants in the Civil Rights movement. R&B songs like 'Stand by Me' were understood to be referring to the struggle against injustice as well as optimism about the future.

According to BMI, 'Stand by Me' is among the top five most-performed songs of the 20th Century, with more than 11 million performances. In 2012, it received a Towering Song Award from the Songwriters Hall of Fame. So it's small wonder that if someone says 'Stand by Me', that's the song you think of. Apparently, the song was on one young couple's mind at their wedding: 'Stand by Me' was performed by a choir at the wedding of Prince Harry of the UK and Meghan Markle of the US.

We've found out a lot starting from that piece of old sheet music. Not bad for a yellowed piece of paper. It almost makes you want to see what's in your piano bench.

For better understanding of the role of Parson Jack Johnston in Georgia religion and politics, see the article 'Different Gospels' by Richard Hyatt in the Columbus, Georgia, Ledger-Enquirer, 5 May, 2007.

Find out more about Charles A Tindley at the Taylor House Museum in Berlin, Maryland.

You want to know what this version of 'Stand By Me' sounds like? Play it yourself. Or watch this video.

1In mid-20th-Century evangelical parlance, 'special music' meant performance music, as opposed to congregational hymn singing, as in 'after the offertory, Mrs Jones will present our special music on her musical saw.'2They were the Woodward-and-Bernstein combination of the 1940s: young, enthusiastic, and revelatory.3The reference is to the Ku Klux Klan, a racist terrorist group.4According to Kytle and Mackay, they suspected that the reverend's printing press was also used to produce grocery-store flyers.