The Lake Peigneur Disaster Content from the guide to life, the universe and everything 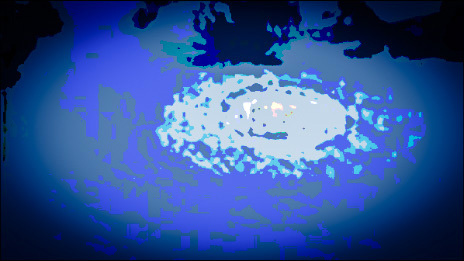 On 21 November, 1980, one of the most improbable industrial disasters in recent history took place in Iberia County, Louisiana, USA. 17 days before, a former B-movie actor called Ronald Reagan had been elected President of the United States by a landslide majority. The same period later, the inexplicable murder of John Lennon would take place in New York City. On the day itself, millions of Americans were anticipating the revelation of JR Ewing's would-be assassin in the evening's edition of the Dallas soap opera. Bizarre as these events might have been, none of them were stranger than what happened to Lake Peigneur.

There were two separate industrial operations taking place simultaneously at the peaceful freshwater lake. Neither was particularly obtrusive, and the place was scenic enough to possess a popular visitor attraction in the form of a botanic garden on an island in the middle of the lake's five square kilometres. The longer-standing operation was the Diamond Crystal salt mine, which exploited an unusual geological feature of the area, a salt dome some 300 metres below the shallow lake bottom. The more recent arrival was a Texaco exploration rig, speculatively looking for oil.

There are plenty of oil wells in southern Louisiana, but prospecting in the lake itself had been avoided for decades, precisely because the geologists were wary of the salt deposit. Texaco gave assurances that they knew what they were doing, and promptly drilled straight into the third-level workings of the salt mine below. In the early hours of the morning, the rig was shaken by a series of percussions and began to list. The 12 men on it decided to abandon their station and made for the shore in a launch. As dawn broke, they saw to their astonishment that the entire rig had disappeared. Its derrick had stood 30 metres tall and the lake was only three metres deep at the point they had recently vacated. The water was moving too, slowly at first but soon it began to circulate more purposefully and formed a steady whirlpool exactly where the rig had been.

The men in the lower levels of the mine had a significantly bigger problem. Lake Peigneur was now emptying into their workings, and the water began to rise around their knees. Fortunately, the safety drills were well rehearsed and the electrical systems had been adequately protected. With power still intact, the miners moved up to higher positions before taking mine-carts back to the headshaft. From there they were ferried to the surface via the mine elevator. It took rather more than an hour to evacuate the mine, but all 50 men who had been underground at the time of the breakthrough were rescued without injury. In fact it was only when they arrived at the surface that they realised how much danger they had faced.

By now, the whirlpool at the surface had assumed destructive force. Although the original borehole was less than half a metre in diameter, the salt that it had penetrated was eroded and dissolved very rapidly by the flow of water. The affected section of the mine workings collapsed, and the bottom of the lake fell into the resulting sinkhole. The process continued with increasing turbulence and violence. A second rig, several hundred metres from the first, was sucked in and so was the jetty at which the oil workers had recently disembarked. A large part of Jefferson Island and its botanical garden disappeared, including several trees and much of the parking lot. Two trucks that had been parked there overnight disappeared into the flood.

It didn't end there. Lake Peigneur was connected to the Gulf of Mexico by the 20-kilometre-long Delcambre Canal. The normal weak outflow was now replaced by a powerful inflow as the lake emptied. An estimated 70 million tonnes of water went down into the hole. So did 11 barges that had been moored in the canal, as well as a manned tug from which the crew fortunately managed to escape. For around three days, Louisiana acquired a notable waterfall, originally some 40 metres in height as the lake surface had sunk that far as a result of the enormous void below. Eventually, the lake level returned to the same height as the canal and the inflow ceased. Nine of the missing barges bobbed back up to the surface, but none of the other lost equipment was seen again. The flotsam also included a large quantity of dead fish and distressed biological matter; Lake Peigneur had changed from being a small freshwater lake into a saltwater one of ten times the volume.

Diamond Crystal pursued Texaco vigorously for damages. The salt mining company extracted $45 million, and then made a lot more by selling its assets to a gas company who today use the void in the salt for underground storage. The misery of the local populace still continues as a result: they claim that the lake sometimes bubbles and fear that another industrial disaster might be looming. The compensation they received as a result of the original incident was itself small. The more recent political appetite for hounding oil companies, as exemplified by local congressmen's reaction to the Deepwater Horizon1 incident, did not apparently apply in the early period of Reagan euphoria.

The Lake Peigneur disaster is less remembered than it should be, and were it not for the internet penchant for astonishing movie clips it would be more obscure still. The extraordinarily lucky avoidance of casualties is probably a factor in our ignorance. The draining of a lake is also a more common event than might be supposed, though in most cases the lake is artificial and the incident is the result of a dam failure. Perhaps the most forgettable thing about Lake Peigneur, however, is its location. Just 150 miles to the east lies one of the most celebrated cities of the United States, New Orleans, but even here a far worse catastrophe through Hurricane Katrina in 2005 met with a feeble response and passed all too quickly from national attention.

In its recent history, the United States of America has exhibited some traits that the rest of the world quietly deplores, and the fate of Lake Peigneur arguably exemplifies them. The environment should never be treated so carelessly. The political insignificance of a community should never inhibit assistance to its afflicted populace. Above all, journalists and the media they represent must continue to expose institutional failures like the Lake Peigneur Disaster, and to resist all political attempts to stifle the truth. Otherwise, we are all at risk of the repetition of calamities like this one, perhaps on our own doorsteps.

1An offshore oil rig owned by BP and operated by Transocean that burned and sank in the Gulf of Mexico, causing a notorious oil spill in the summer of 2010.