Milk Matters: The History and Significance of Dairy Farming in the United States Content from the guide to life, the universe and everything 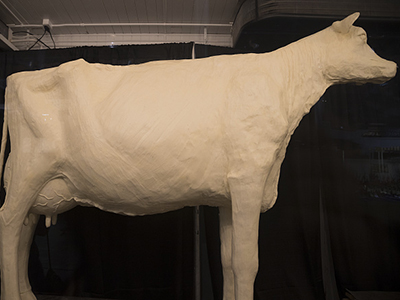 Ah, science. The set of investigative skills that enable humans to get themselves to the Moon, but also lead to exotic political and social phenomena. For example, popular reception of science affected the clothing and shoe industries of western Europe and North America in the late 19th Century. Scientists explained to people that contagious diseases were spread by 'germs' – like the invisible bugs ladies were bringing into the house on the hems of their trailing skirts. Hemlines went up (but not too far). Ladies then had another worry: never mind the germs, those exposed ankles might cause undue sexual excitement in males. Fashion's response: the high-button shoe.

Scientists sometimes worry about these unintended consequences of their enquiries, with reason. Ill-advised approaches to science can lead to unfortunate results, from the early aviation experiment of Eilmer of Malmesbury to the horrors perpetrated by eugenicists everywhere. So of course they got worried about the white supremacists and their ostentatious 'milk chugging'. Why is this even an issue in the 21st Century? What's the milk deal? It might surprise you to learn that the history of milk in the United States is more politically fraught – and more science-related – than first imagined.

The Milk Gene and the Aurochs

Why do all these Americans want to keep so much milk in my fridge? It's obscene. Milk is for children.
- Outraged British bed-and-breakfast operator in Athens, 1984.

The cow, in the form of an aurochs, was first domesticated in the Fertile Crescent about 8,000-10,000 years ago, but scientists (them, again) don't think anyone milked them until ancient Britons and Northern Europeans took up the habit sometime between 5000-4000 BCE. The practice spread, and soon farmers (meaning 'most people', since farming was common then) were churning out butter and making tasty cheeses. What really helped the spread of this new fad of dairy farming, though, was a genetic event. Here come more scientists.

Scientists have figured out that a genetic mutation1 makes it possible for some – but not all – of the world's human population to digest milk sugar lactose as adults, rather than only as babies. Two-thirds of the humans in the world still can't do this, meaning that three-cheese pizza is not, for them, an unalloyed blessing. Lactose intolerance can cause abdominal bloating, nausea, diarrhoea, and other unpleasant intestinal symptoms, which is why it's wise to ask parents before offering ice cream to their pre-teens, or scheduling a multicultural pizza party.

Lactose intolerance, and the genetics behind it, are scientific and medical facts. The claim that ownership of the lactase persistence gene makes you 'superior' to other humans is dubious at best. It merely means that you are free to gain all the weight you choose pigging out on ice cream and cheesy comestibles. The next question, however, follows close upon the first: why is North America such a hotbed of lactose, anyway? Who brought in all those cows?

He asked water, and she gave him milk; she brought forth butter in a lordly dish.
- Judges 5:25, Authorised Version2

The answer to the previous question is, unsurprisingly, 'The Puritans'. Yes, cows arrived in Plymouth Colony, Massachusetts, in 1624. They came in a variety of colours and breeds3. Cows, and dairy products, flourished in the Northeast. In 1843, Nancy M Johnson of Philadelphia patented the hand-cranked ice cream freezer4, giving Americans yet another reason to love dairy. Cows spread wherever lactase-persistent immigrants went, which meant that the Germans and Scandinavians who invaded the Midwest also populated it with dairy cows. In the second half of the 19th Century, dairy became a major industry, leading to some progress and also controversy.

Post-Civil War America was a time of increased food distribution due to the growth of railroads and the process of 'vertical integration' in production and distribution. Large companies took control not only of food production, but also of processing and transportation, controlling every aspect of a food product, such as milk, cheese, or meat, from the farm to the market. Fortunes were made this way, but farmers and consumers sometimes suffered. In 1883, a 'milk war' broke out in the state of New York. Strikes by farmers, and deliberate spillages of milk on its way to distributors, even caused a 'milk famine' in New York City. Eventually, distributors were forced to pay dairy farmers more for the milk, but 'milk wars' continued into the 1930s across the US. Milk was serious stuff.

Back to science. Dairy consumption has been responsible for a number of scientific breakthroughs, to wit:

Got Milk? And Other Promotions

The milk from contented cows.
- Slogan for Carnation™ evaporated milk

Milk is big business, and so is convincing people that dairy is 'good for you'. Over the years, cows have been contented, and rabbits like Carnation milk. California cows claim to be 'happy' as opposed to the merely 'contented' cows of Wisconsin. The lack of milk in a household is portrayed as a potential tragedy. Advertising seeks to persuade us that milk-drinking is the road to Olympic stardom. Not everyone is impressed. 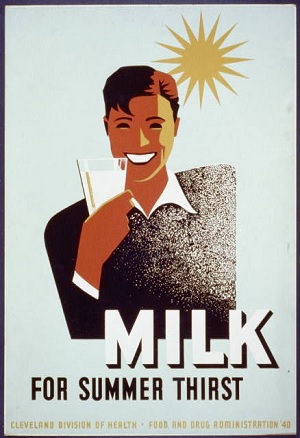 Milk is big government business, too. During the Great Depression, the Works Projects Administration (WPA), a New Deal programme, commissioned adverts to convince people to drink more milk. At that time, many would have gladly done so, had they been able to afford a glass, a bottle, or a cow – or still had a farm to keep one on. Notice that poster: the gleaming white teeth were an emerging symbol of good health and attractiveness in the toothpaste-ridden 1940s. The message is clear: successful, healthy, and above all, attractive people drink milk. All the time.

One of the dairy industry's bitterest fights was over oleo, which today we call 'margarine'. This butter substitute, first invented by French scientist Hippolyte Mége-Mouries in 1869, is arguably healthier than butter. Due to dairy industry lobbying over the decades, US margarine manufacturers have at various times been forbidden to dye their product yellow – leading to the purchase of yellow dye to mix in with the boring-coloured substitute – or even to mention the word 'butter' in their adverts. The latter prohibition led to the word 'spread' as a term of art.

As more Americans learn about cholesterol, fat, and other nutritional dangers, and become informed about lactose intolerance and its discontents, dairy consumption may wane slightly. But the industry will keep on plugging its products at home and overseas. Even if the gene for all this milk-drinking doesn't convey any sort of hereditary superiority.

1Possibly more than one. Read this article on 'Lactase Persistence' from University College London, which even has a handy dairy farmer map.2Yes, we know what happened next: she murdered him in his sleep.3The cows, not the Puritans, who were basically English.4Do you want to read the patent application? Of course you do.5According to the Illinois Farm Bureau's Dairy Fun Facts:

Milk is measured in pounds, not gallons, for the purpose of accuracy. It's difficult to total the milk records in volumetric measurements – imagine having to add together 4 gallons, 3 quarts and 2 tablespoons in the morning, and 6 gallons, 1 quart, 3 pints and 2 teaspoons in the evening!