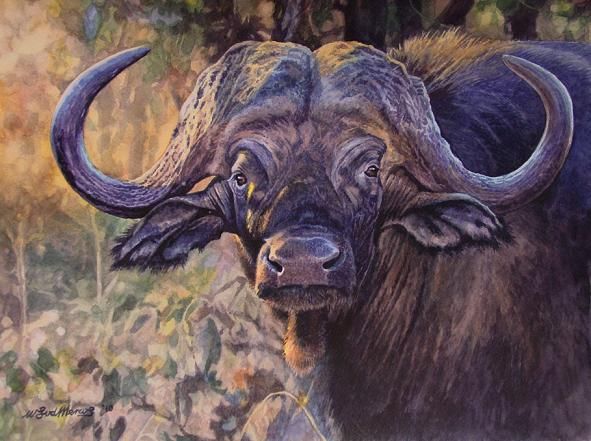 Today we're back with big, spectacular mammals! This time, a painting of an African Buffalo, Syncerus caffer.

Since my painting is of a savannah buffalo, I'll speak of them first of all! I've depicted a big bull here. Its most characteristic feature is the huge, thick, rough 'boss' formed where the two horns meet over its eyes. This is a very thick growth of bone and keratin (the substance from which the horn sheath of cattle, sheep, goats and antelopes is formed). Bulls fight by knocking and shoving each other around with their horns, the thick boss giving some protection to their skulls, like a helmet. But this boss is so hard and thick that it also protects them from hunters – to some degree – as the boss can even stop or deflect rifle bullets. Against non-human enemies the horns are extremely effective, in this case being used with a sideways-swiping motion so that the curved pointy tips can hook and rip and even disembowel large predators like lions.

Buffaloes are indeed not really afraid of lions. They will often, when encountering lions, react aggressively and in groups. Lions that are cornered by enraged buffaloes are often killed.

An adult bull buffalo can achieve a shoulder height of 1.7 m (5'6") and a bodyweight of 900 kg (2 000 lbs). Its horns can span more than a metre (a bit over a yard). Cows are slightly smaller, and their horns are more slender, with much less of a boss. These horns are still very sharp-tipped, though, and still very lethal to predators.

Savannah buffaloes are widespread in sub-Saharan Africa at present, occurring mostly in regions of luxuriant grass along with some trees and bushes for shelter. They are also dependent on water for drinking and wallowing in mud, but may range up to 20 km from water sites. Buffaloes are ecologically very valuable. They open up regions of tall grass. . . not only by eating the grass, but also by tramping it down wherever they move. This not only allows other grazers that prefer shorter grass to enter, but also stimulates vigorous re-growth of grass, thus improving the productivity of the habitat. They will not overgraze or erode an area by trampling; as soon as the area starts getting depleted they will move away and seek fresh grazing. Although they eat mostly grass they will also sometimes browse the leaves of trees and shrubs.

Actually the savannah buffaloes appear to be the descendants of forest-living buffaloes – these probably were close in appearance to the still present buffaloes living in the rainforest belt. These rarely exceed about 320 kg (700 lbs) in bodyweight. In moving to the open savannahs, the buffaloes thus became a lot bigger. This may be to be able to deal more effectively with large predators, since there is less shelter. Signs of the forest-living ancestry of the savannah buffalo are its dependency on sources of water, as well as its relatively poor eyesight but well-developed sense of hearing. Buffaloes have large, drooping ears that spread sideways below the horns – as you can see in the painting. Their sense of hearing is keen and they use sound to keep in contact as well as to communicate. Like cattle, their sounds are mostly lowing noises, or grunts and bellows.

Their eyes are comparatively small, though. This is unusual for animals that live in fairly open savannah areas, where spotting a predator from afar is a valuable skill. But because of their size, buffaloes are less vulnerable to predators. Another protective measure of theirs is congregating in large herds. While forest buffaloes live in small groups, rarely numbering over a dozen, savannah buffalo herds can number in the hundreds of animals – sometimes, in exceptional circumstances, over a thousand. In such large groups they are very safe. They have strong, mutual protective instincts, and a single animal that gets attacked will bellow with distress, which will bring every other buffalo within earshot running to its aid. Taking this into account it is amazing that lions ever manage to bring down adult buffaloes – but they do – and one has to appreciate just how desperate they have to be merely just to try it. Hence, the expression 'brave lion, nonchalant buffalo' to describe such an encounter.

A buffalo herd is indeed such a safe environment that blind or three-legged animals often manage to survive just fine.

As mentioned, the water-dependence of buffaloes is also a feature coming from their forest ancestors. As such, savannah buffaloes inhabit fairly lush savannah grasslands close to rivers or ponds. Apart from regular drinking they also wallow in mud, which helps cool them down as well as protecting them against skin parasites. They do not range into open semi-desert scrublands or grasslands, not having advanced physiological adaptations to conserve water and cool down – as do for instance the smaller-bodied dik-diks or steenboks.

These mammals are still numerous in Africa, numbering almost a million. But they cannot be considered to be safe, since their habitat is still being destroyed and they face competition from domestic cattle. Buffaloes are vulnerable to diseases like hoof-and-mouth disease and rinderpest, as cattle are, and herds can be decimated by outbreaks. Also, buffaloes are hunted, often by trophy hunters. I wish they would stop. Buffaloes are perhaps the most dangerous of mammals hunted on this continent so it's supposedly a big deal for a hunter to have shot one. But still there's not much of a chance a buffalo has against a high-powered hunting rifle and even if the odds were even between the buffalo and the hunter it's still just a bunch of macho nonsense. There are more impressive and constructive things a person could do than killing other living beings and then boasting about it. And the idea of hunting for impressive trophies is to me especially lousy, since when you kill a particularly big and impressively-horned buffalo you're removing it from the gene pool AND you're also removing other people's opportunities for seeing and admiring the animal. How about taking photographs instead? Then you have proof of having found and managed to come fairly close to a dangerous (and beautiful) animal and also you're leaving it alive and – one would hope – happy and not denying any opportunities to other people to also find, see and photograph it. And I would say there's more patience and skill involved in catching a buffalo (or any other animal) in a good pose against a good background in good lighting conditions.

Anyways. There are still thousands of people who visit Africa's parks and nature reserves just to enjoy the spectacle of seeing these animals, whether singly or in vast herds. I really hope that this will be going on into the future, because truly this is one of our continent's treasures.

Before this present species of buffalo, other kinds of huge ox-like animals lived on the African savannahs. Belonging to the extinct genus Pelorovis, these animals might have been even more impressive, bigger in body and having incredibly long, wide, curved horns. Some species might have had horns spanning more than three metres (10 ft)! These were obviously animals of the open since such horns would have restricted their maneuverability in forests or thickets. Pelorovis, sad to say, died out some thousands of years ago, and this might have enabled the present species of buffalo to come out of the forests onto the plains.

Other living relatives of the African buffalo include all species of cattle, wild ox, buffalo and bison. Farm cattle, Bos Taurus, are domesticated relatives or, more likely, descendants of the extinct Aurochs, Bos primigenius. In Asia, several more wild species of Bos occur, including the huge wild oxen, the Gayal, Bos frontalis, Gaur, Bos gaurus and Kouprey, Bos sauveli. The Yak, Bos grunniens, is one of the most high-living and cold-adapted large mammals in the world, occurring mostly in Tibet and the high mountains of central Asia. Water buffaloes, Bubalus bubalis, can also become huge, but there are very few wild ones left, most being domesticated. A number of smaller Bubalus-species occur in southeast Asia. Then there are the two species of Bison, the American Bison bison and the Eurasian Bison bonasus, also called Wisent, which is very endangered. Is not quite clear to which of these species the African buffalo is most closely related, and it is currently placed in its own genus, Syncerus.

Lastly, it must be pointed out that buffaloes, bison, cattle and wild oxen, are merely one group of members of the huge Bovidae family, which also includes antelopes, gazelles, sheep, goats, and things that are intermediate between those classifications. Within the Bovidae, the buffaloes and cattle are actually fairly conservative – meaning they don't have many novel and advanced adaptations compared to some of the others. Their closest relatives are the spiral-horned antelopes, some of which I hope to soon illustrate and write something about for this column. Among these, the largest are the Elands, Taurotragus oryx and Taurotragus derbianus, both of which can attain 900 kg/2000 lbs in bodyweight and thus rival the buffalo for the title of the heaviest bovid in Africa.