Quentin Crisp - Artist, Author, Actor, Raconteur Content from the guide to life, the universe and everything 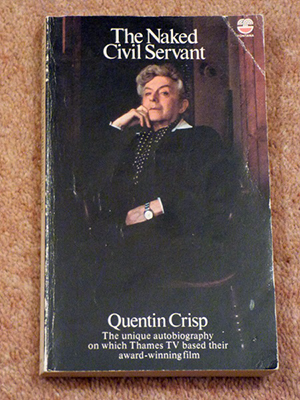 The flamboyant and eccentric author, actor and raconteur known as Quentin Crisp found fame at the age of 66 when his autobiography The Naked Civil Servant was turned into a television film. His wit and wisdom would go on to provide solace for people similarly struggling to understand themselves, while provoking strong reactions in others just as his appearance had provoked mixed reactions in his youth.

I learned very early in life that I was always going to need people more than they needed me.
- Quentin Crisp, The Naked Civil Servant, 1968

Denis Pratt was born on 25 December, 1908. From an early age he knew he wasn't like the other boys or girls of his acquaintance, but still he did the usual things expected of a child. He participated in role play games with friends, although he 'never play[ed] the part of a man', and was more prone than his three older siblings had been to tantrums, tears and 'accidents' in a quest to be the centre of attention. He won a scholarship to a boarding school and did reasonably well academically. At the age of 18, he went to King's College London to study Journalism.

He left King's College after two years without having obtained a diploma, but having learned that 'I was not alone' - there were other people with 'the characteristics of a certain kind of homosexual person'. He was often to be found in a café called 'Au Chat Noir' (commonly known as 'The Black Cat') in Old Compton Street, Soho. Like many of the clientele there, he earned money as a rent boy1 for a time. He formally moved out of his parents' house at the age of 22 and changed his name to Quentin Crisp.

Exhibitionism is like a drug. Hooked in adolescence I was now taking doses so massive that they would have killed a novice.
- Quentin Crisp, The Naked Civil Servant, 1968

As his 'appearance progressed from the effeminate to the bizarre' (he wore bright eyeshadow and lipstick, dyed his hair red and grew his fingernails long and pointed), Quentin more often became the victim of violence, from people spitting at him or deliberately treading on his toes, to groups of men beating him up. He took a variety of jobs and also spent time on the dole, while writing plays, prose and poetry in his spare time. At times he struggled to make ends meet, so was lucky to frequent cafés where the (female) managers took pity on him and gave him extra large helpings of food for his money, but he often spent days in bed as 'it is easier to starve supine than erect'.

Quentin had taken evening classes in Art when he had been employed, so he went on to spend four years working as an illustrator for a printing firm before going freelance. He also earned money as a tap dancing teacher (by learning as he went along), and published two books2, one entitled Lettering for Brush and Pen (1936) and the other called Colour for Display (1938) about window dressings for shops.

When World War Two broke out the need for illustration work dried up, so Quentin again had to live frugally - he moved to the bedsit in Chelsea that he would go on to occupy for 40 years. Hoping for an income, he tried to enlist in the army but was exempted for 'suffering from sexual perversion'3. He lived on borrowed money from friends, but received some payment as an artist's model during this time, sitting for Clifford Hall. Later he worked for a few months as an artist in a film studio, and designed covers for books.

Engaged as a stand-in for a life drawing session in a school one day, Quentin soon found more work as an artist's model. He was employed by the Government, via the Ministry of Education, making him a naked civil servant. This work sustained him for 30 years. He was interviewed for a BBC radio programme about eccentrics in 1964, which led to him writing an autobiography. The Naked Civil Servant was published in 1968 (a year after the Sexual Offences Act 1967 in England and Wales partially decriminalised male homosexuality).

The book sold reasonably well, and inspired a 1970 World In Action documentary filmed in his bedsit. His humble and dusty4 abode was contrasted with the 'Baroque refuge' of fashion designer Yves Saint Laurent. However, it was in 1975 that the book and its subject reached a wide audience through the Thames Television film of the same name. Actor John Hurt won a BAFTA award for his portrayal of Quentin Crisp.

Quentin's generalisations about homosexuality, apparently rooted as they were in internalised homophobia and a desire to appeal to the heterosexual majority5, caused anger among 'gay liberation' campaigners such as Peter Tatchell. However, his less controversial witticisms won him many fans - he was listed in the telephone book6, so he received numerous letters and telephone calls from people eager to receive his polite and helpful advice.

The interest in his life story encouraged Quentin to write more books including the sequel autobiography How to Become a Virgin and lifestyle guides such as How to go to the Movies and Manners from Heaven. He also took to the stage in 'An Evening with Quentin Crisp', which toured the UK and introduced him to the city of New York.

Quentin played a role in a 1976 film of Shakespeare's Hamlet (in which Helen Mirren also appeared), but it was after he moved to New York in 1981 that he became sought-after on screen. 1985 saw him play Dr Zarlus in The Bride, in which Sting played Baron Frankenstein, and he inspired and appeared in the video for Sting's song 'Englishman in New York' in 1988. He had cameo roles in films such as Philadelphia (1993) and To Wong Foo Thanks for Everything, Julie Newmar (1995), and played Queen Elizabeth I in Orlando (1992). He even appeared in adverts for items as diverse as CKOne perfume and Levi jeans.

At Christmas 1993 Quentin gave the first 'Alternative Queen's Speech' on Channel 4, and appeared in Camp Christmas, a cheesy variety show featuring notable people such as Ian McKellen, Stephen Fry and Martina Navratilova. He also appeared on talk shows and continued performing on stage in New York.

In 1999 he reluctantly agreed to return to the UK to give more performances of 'An Evening with Quentin Crisp', even though he was not in the best of health for such a journey. He died in Manchester on 21 November, 1999, aged 90, having previously predicted that he would live for 100 years with 10 years off for good behaviour.

Since he died Mr Crisp has continued to be the subject of books, films, television programmes and even academic articles examining his lifestyle7, debating the meanings of his aphorisms8, and analysing his impact on LGBT culture9. The television film An Englishman in New York, the follow-up to The Naked Civil Servant, again featuring John Hurt in the starring role, was broadcast in 2009.

At the age of ninety, it has finally been explained to me that I am not really homosexual, I'm transgender. [...] If it's confusing for you, think how confusing it has been for me these past ninety years.
- Quentin Crisp, The Last Word, 1999

The Last Word, the final volume of his memoirs, that he dictated to his friend Phillip Ward in the 1990s, was published in 2017. In it, he contemplates sexuality and gender in more detail, using the vocabulary that he had not had access to in his youth. He said: 'These days I'm asexual' - he had had relationships in the past, but never found the 'Great Dark Man' of his dreams, and generally preferred his own company. While he often described himself as 'a woman trapped in a man's body', and stated that if he had been a woman 'life would have been much simpler as a result', he did not transition as others had, but instead cultivated an androgynous appearance so he might, in modern terms, have been non-binary. Whatever the case, the main message he conveyed in his life was, as the song said, to 'be yourself, no matter what they say'.

1A male sex worker.2In 1943 he published a book of poetry, All This and Bevin Too illustrated by Mervyn Peake of Gormenghast fame.3An acquaintance subsequently said: 'I don't much care for the expression "suffering from". Shouldn't it be "glorying in"?'4Mr Crisp famously said: 'After the first four years the dirt doesn't get any worse'.5Although it was also said that 'he was a prankster and told people what he thought they wanted to hear'.6Later, he also obtained an e-mail address and a website - now the Crisperanto website contains an archive of his work curated by his friend and literary executor Phillip Ward.7Such as 'A Room in Chelsea: Quentin Crisp at Home' by Mark Armstrong, in Visual culture in Britain Volume 12 Issue 2, 2011.8Such as 'Manhattan Masquerade: Sexuality and Spectacle in the World of Quentin Crisp' by Mark J Bendall in Cont_xts? Media, Representation and Society, Chester Academic Press, 2008.9Such as 'Queens and queenliness: Quentin Crisp as Orlando's Elizabeth I' by Glyn Davis in The British Monarchy On Screen, Manchester University Press, 2016.