Martina Navratilova - Tennis Player Content from the guide to life, the universe and everything 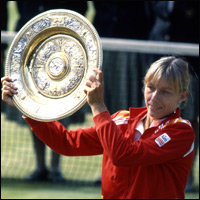 Martina Navratilova is unquestionably one of the greatest sportswomen in history, and has a strong claim to the title of greatest female tennis player of all time. She is also an individual of great courage, who has had to overcome prejudice and repression from political forces of the left and right in order to express herself freely and achieve sporting greatness.

Born Martina Subertova on 18 October, 1956, in Prague, Czechoslovakia1, her first home was a ski lodge in the Krkonose Mountains, where her father, Miroslav Subert, was a ski instructor. Her parents split up when she was still a small child, and she and her mother moved to Revnice in the countryside of Bohemia.

Tennis ran in her family; Martina's grandmother Agnes Semanska had been an international tennis star. So Martina took up the sport when very young, entering her first tournament at the age of eight. Her first coach was her stepfather Mirek Navratil, who married her mother in 1962 - after which Martina adopted his surname, adding the feminine suffix 'ova'.

The young Martina reached the semi-finals of her first tournament, and her prodigious talent soon attracted the attention of the Czech authorities. She was then coached by George Parma, one of Czechoslovakia's greatest tennis players of the 1960s.

She became a tennis professional in 1973, and in that year she visited the United States for the first time. Playing in a tournament in Akron, Ohio, she was beaten by Chris Evert. The match began a rivalry that would last for much of her career.

These were difficult times in Martina's homeland. During the 1960s the Czech head of state Alexander Dubcek had tried to introduce a liberal form of socialism in Czechoslovakia, and, in doing so had increasingly antagonised the Soviet Union. On 21 August, 1968, the Soviet army invaded Czechoslovakia and forcibly imposed an orthodox communist regime.

In the years that followed, Martina frequently came into conflict with the new regime in Czechoslovakia. She offended the authorities by publicly expressing opinions that conflicted with the official line, and she was warned that further 'offences' would lead to her being denied the exit visas she needed in order to travel outside Czechoslovakia.

Finally, in August 1975, Martina decided she'd had enough of the Czech regime. She defected to the United States during the US Open Championship. Within a month she was awarded a 'Green Card', entitling her to permanent residence in the USA.

It was a brave move; it meant that she was cut off from her family. They could not leave Czechoslovakia to visit her, and Martina would have been arrested had she returned to her old homeland. She was unable to see her family for four years following her defection.

During these early days in the USA, Martina's form suffered; she embraced the American way of eating a little too enthusiastically, and rapidly gained weight. She soon got back in shape, however, and on 8 July, 1978, she beat Chris Evert to win the Wimbledon ladies' singles title for the first time. This success earned Martina the number one position in the Women's Tennis Association's global rankings. She retained the Wimbledon ladies' singles title in 1979.

Martina's prominence in the tennis world prompted the tabloid press to take an interest in her private life. She had often been seen in the company of the proudly lesbian novelist Rita Mae Brown, and newspapers began to speculate about the nature of their relationship. Martina ended the speculation by confirming that the papers had guessed right - she was a lesbian and she and Brown were a couple.

This openness about her sexual orientation earned her much respect, but also cost her a great deal of money in lost sponsorship, with some potential sponsors fearing a backlash from intolerant consumers if they associated their company's name with someone who was openly homosexual.

However, Martina was able to gain the unequivocal acceptance of the US immigration service. On 21 July, 1981, she became an American citizen.

On Top of the World

In the early 1980s, Martina began to dominate the world of women's tennis as never before. In 1982 she won a phenomenal 29 tournaments (15 singles and 14 doubles events). These victories included a triumph in the 1982 women's singles championship at Wimbledon. During the same year, she became the first sportswoman ever to win a million US dollars in a single year.

Martina dominated the Wimbledon ladies' championship throughout the mid-1980s. She won an unparalleled six consecutive singles titles, from 1982 to 1987 inclusive. She also retained her world number one ranking until 1987, when Steffi Graf finally took over the top spot.

During this period, two women became particularly important in Martina's life, for very different reasons. Her great rivalry with Chris Evert intensified. Their styles of play were very different. Martina favoured an aggressive, serve-and-volley approach, frequently rushing to the net. Evert preferred to spend more time by the baseline, relying more on accuracy than aggression. Martina was fierce and emotional; Chris was calm and cerebral.

Evert was usually the crowds' favourite. Not only was she the underdog, she was also the more conventionally beautiful of the two, and didn't have to battle against homophobia to gain the respect she deserved, but the antipathy she received from some quarters only seemed to spur Martina on to ever greater success. It all led to many memorable clashes on courts all over the world, which continued until Evert's retirement in 1989.

The other great influence in Martina's life was the new partner who had entered her private life. After splitting up with Brown, Martina began a long-term relationship with another writer, Judy Nelson. Judy was often in the crowd to cheer Martina on when she was at the height of her power, and Martina would often run into the crowd to hug her lover after winning tournaments.

These public displays of affection sometimes seemed to make television commentators uncomfortable. At a loss for an 'acceptable' way to describe Martina and Judy's relationship, they would coyly refer to Judy as Martina's 'friend' rather than as her partner or girlfriend2.

In 1990, Martina won the Wimbledon singles title for the ninth time, breaking a record that had stood since 1938. She has also won 11 Wimbledon doubles championships. Her total of 20 Wimbledon championship victories is a record that she shares with her friend and one-time ladies' doubles partner, Billie Jean King.

Martina continued to compete in singles matches at the highest level well into her 30s. On 21 February, 1993, aged 36, she beat the then world number one Monica Seles in the final of the Paris indoor tournament. She won her last singles title on 20 February, 1994, in the same competition.

Having already announced her intention to retire, Martina made a determined attempt to win one last Wimbledon singles title. She came within one match of doing so, but finally lost a closely contested final to Conchita Martinez. Martina retired from regular competition on 15 November, 1994, after losing to Gabriela Sabatini in the New York Masters. She had won a total of 167 singles competitions - a world record.

Martina has won over $20 million in the course of her brilliant career, but wealth hasn't made her complacent. She has campaigned extensively for gay and lesbian rights, for animal welfare and for environmental causes.

In April 2000 she returned to competitive tennis, and in January 2003 she finally captured the one Grand Slam3 title that had hitherto eluded her. In partnership with Leander Paes, she won the mixed doubles title at the Australian Open. She could thus claim to have won at least one championship in singles, women's doubles and mixed doubles at all four of the Grand Slam tournaments.

Further glory was to follow for Martina and Paes at Wimbledon 2003. On 6 July, 2003 they won the Wimbledon mixed doubles title. Martina's victory at the age of 46 years and 261 days made her the oldest player ever to win a Grand Slam tournament.

Afterwards, Martina commented: 'All my titles here are special but the last one was eight years ago, and I never thought I'd play again after that. It's been a great ride and this is very, very special.'

Martina was invited to join the I'm A Celebrity Get Me Out Of Here show in 2008 and accepted, even though she has a fear of heights and a phobia of spiders. She was still reeling from having lost her beloved mother to emphysema aged 75, so was particularly vulnerable. The notoriously private Martina gave the viewing public a glimpse into her private life, including that she'd had male lovers, and how difficult relationship break-ups had been. During her time in the Aussie jungle she proved a massive hit, finishing runner-up to Joe Swash, the popular ex-EastEnders actor who played 'Mickey Miller' in the BBC soap opera, and just ahead of Star Trek legend George Takei (he played Hikaru Sulu, the helm officer in Star Trek: The Original Series).

As if to prove that cancer can strike anyone at anytime, Martina was diagnosed with breast cancer in early 2010. Having lived a healthy lifestyle, keeping her body in the peak of physical fitness, being an advocate for eating nutritiously, never touching tobacco and rarely drinking alcohol, it's a cruel irony that she would be dealt such a devastating blow.

Martina had a routine mammogram - her first in four years - in January 2010, then left to do some tennis commentary work in Australia. Receiving a recall for further testing didn't bother her unduly as she'd had inconclusive results previously. Another mammogram was conducted in February and this time a biopsy was ordered. The result was a diagnosis of DCIS (ductal carcinoma in situ). Luckily for Martina it was still in the early stages; the cancer hadn't spread to the breast tissue from the milk ducts, and it could be treated with radiation therapy following a lumpectomy.

After her treatment Martina decided to speak out about her greatest battle, her fight for life against an unequal opponent rarely beaten, in the hopes of encouraging other women to get themselves checked out regularly instead of putting it off for a more convenient time as she did. Martina had been sure her healthy lifestyle and exercise routine would not expose her to diseases such as cancer. However, people can be genetically inclined (both Martina's mother and sister had check-up recalls but suspicious lumps turned out to be benign) which means hardly anyone is immune. Martina is convinced that the mammogram she had in the nick of time saved her life:

We all have to take personal responsibility for our health - and that includes keeping up preventative screenings.
– Martina Navratilova speaking in April 2010

1Following the break-up of Czechoslovakia, Prague is now in the Czech Republic.2 Sadly, when Martina and Judy eventually split up in 1991, the relationship ended in tears and litigation. A bitter and much-publicised 'palimony' lawsuit kept the press entertained for months.3The Grand Slam tournaments in tennis are Wimbledon, the US Open, the French Open and the Australian Open.